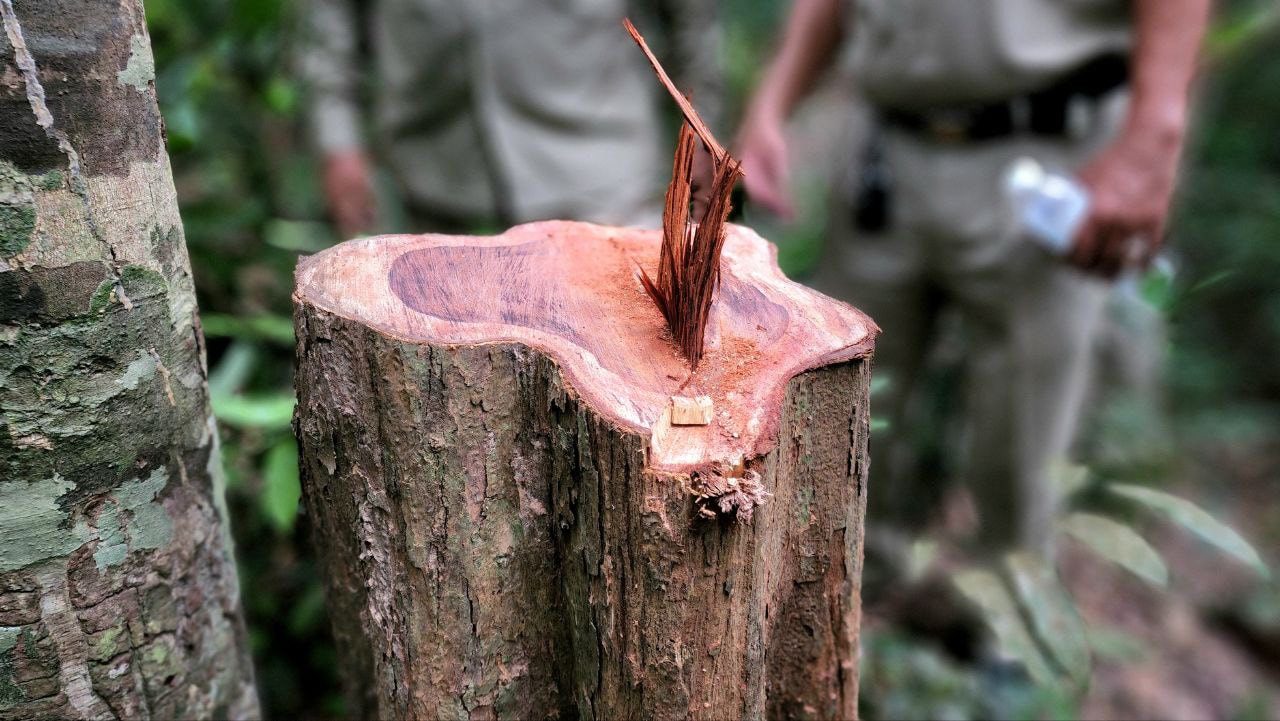 A rosewood stump left from a stolen tree in a conservation area. Photo posted to the Facebook page of Forestry Administration official Kimsoth Tea on Thursday, June 17, 2022.

Unidentified criminals have cut down and stolen four prized rosewood trees from a Siem Reap conservation area, according to officials now offering $1,000 as reward for anyone who can identify the perpetrators.

The trees came from a 1,888-hectare area in Banteay Srei and Svay Loeu district managed by the Forestry Administration to nurture and protect rosewood, a tree known for its valuable dark-colored timber. Rosewood has been decimated around the country by illegal logging.

But after heavy rains over the weekend, patrollers visited the forest on Monday to find four sawn stumps of 50-year-old trees, according to provincial agriculture department director Tea Kimsoth on Friday.

There were few clues, Kimsoth said, but he believes experienced loggers had used handsaws, rather than chainsaws, to avoid making noise.

“I am very sad about the loss of the rosewood, because this type of wood is very valuable and there is only this place in the whole country that still has a lot of the valuable wood left. In other places it is already gone,” Kimsoth said, adding that there were only 11 patrollers for the 1,888-hectare area.

Mong Bunlin, provincial director for the Forestry Administration, said authorities had been searching with the help of village, commune and district officials to try to find the criminals. So far there were few clues, but he believed the loggers had cut the wood into small pieces and carried them out in backpacks in the rain.

Now, they are offering a $1,000 reward to anyone who can identify the perpetrators, Bunlin said.

“We call on anyone who knows the perpetrator: Please report them to us, and we will reward you $1,000.”

Heng Kimhong, an advocacy officer at the Cambodian Youth Network, said he was encouraged to see the authorities’ active search for perpetrators, and hoped they would take similar initiative against deforestation elsewhere.