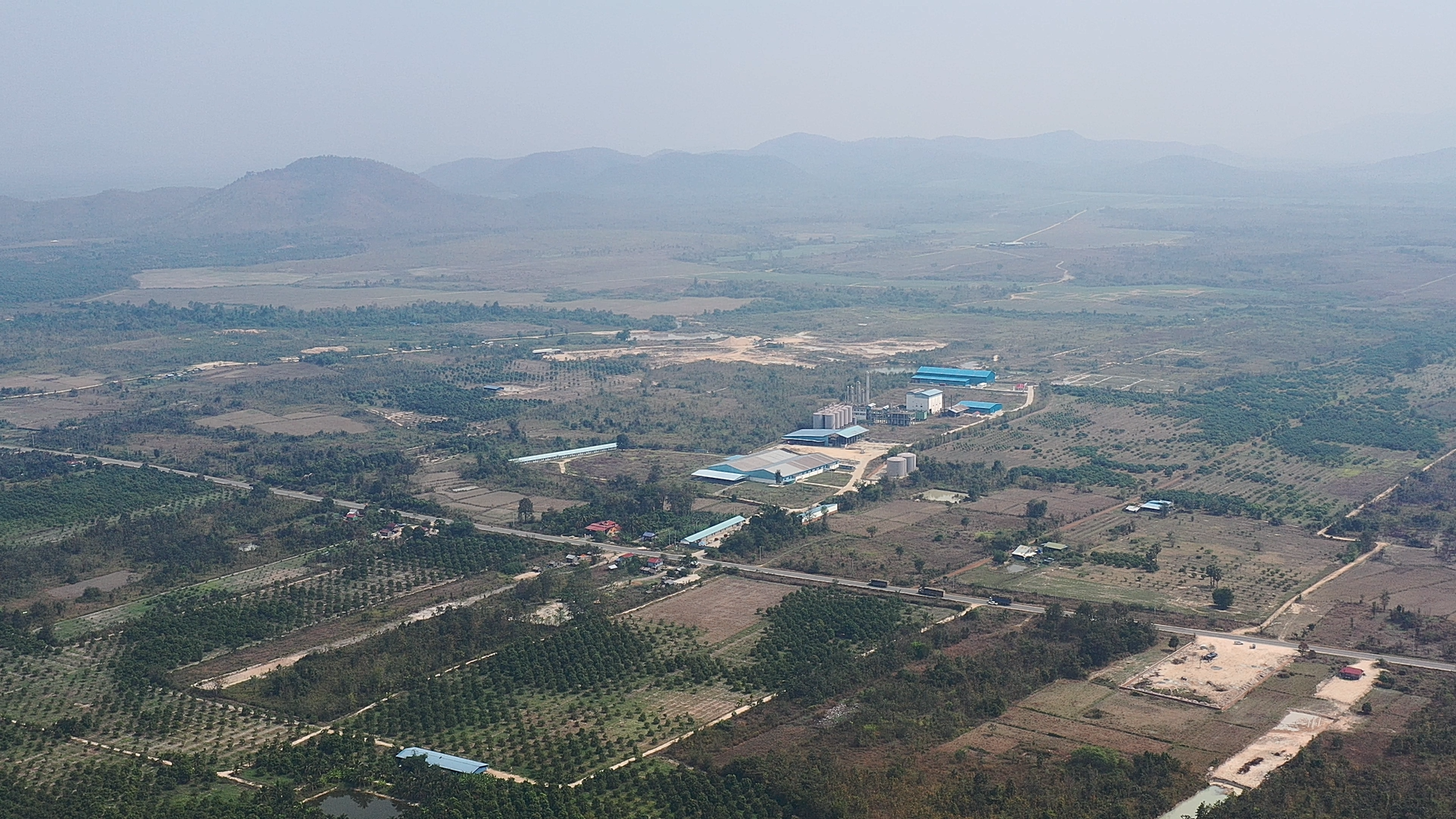 An agroindustrial compound in Kampong Speu province’s Oral district where a ketamine lab was found, photographed in February 2022. (Heng Vichet/VOD)

After a brief trial, a Phnom Penh judge sentenced 11 men to life in prison following their conviction on charges of running a ketamine mass-production plant at a Kampong Speu location that also housed a prominent agribusiness.

Anti-drug police told VOD on Friday they were looking to arrest an additional 10 unnamed accomplices. All the men who are now sentenced to serve at Prey Sar Prison’s Correctional Center 1 are foreign nationals from China or Taiwan — with the exception of Ye Yanshou, 58, who is recognized as the owner of the facility and holds Cambodian citizenship.

Phnom Penh Municipal Court spokesman Y Rin said all were convicted of illegal production and trafficking of drugs, as well as charges of money laundering and the illegal sourcing and storage of chemicals. The group committed these crimes in Cambodia beginning in 2012 and lasting until a December raid by police shut down their operation in the rural Dambong Vinh village of Oral district.

“There are still many more relevant people, there are nearly 10 [more] people,” said In Song, deputy director at the anti-drug department of the National Police.

Though he said the investigation is secret and he could not provide much details about it, Song said the chemicals had come from India and China.

The case has been marked by dramatic law enforcement action, including a December 12 shootout after police say alleged trafficking suspects drove through a roadblock in Sihanoukville province and opened fire on authorities. According to police, the firefight ended with one suspect killed.

The next day, police moved to raid the Oral district facility where they seized 1.4 tons of finished ketamine and 80 tons of drug precursor chemicals.

Initial police reports said the drug lab was operating under the cover of an alcohol disinfectant factory, and was owned by Ye. Government documents show Ye obtained Cambodian citizenship in 2015. The Commerce Ministry business registry lists Ye as a director for five companies in Oral district, in the businesses of chemical manufacture, logistics and real estate.

On January 28, officials accused a company known as Xin Yinfeng of importing without proper licensing more than 100 tons of chemicals that are typically used to make fertilizer but that are also considered drug precursors. Commerce Ministry records identify Ye as chair of this company, which was also listed as being based in Oral district.

Police officials said the lab was on the same compound as mango processor Richfarm Asia, but rejected early media confusion that the lab was a Richfarm facility.

Richfarm’s name is the only one on the front gate of the compound, which is has a high wall on the roadside. The company, among the first to ship Cambodian mangoes to China, has denied any involvement in ketamine production.

Richfarm HR manager Kim Seng told VOD shortly after the raid that his company was merely on the same 30-hectare compound as the drug lab. The company had partnered with another firm, Long Wo Fruit, which operated the Kampong Speu facility to process dried mango.

Dambong Vinh village chief Sou Men, 69, told VOD in February that Richfarm’s business at the site was seasonal but that the company appeared to have left for good after police raided the compound. Men said the facility that was used to make ketamine had been employed previously by a different company to produce alcohol disinfectant before changing hands to a company that made roofing materials.

“A bit after that, another company started up, rented land,” he said. “But they did not allow anyone to come in and out.”

Men said locals grew more suspicious as the new, unknown business cloaked itself in secrecy and received visitors at odd hours, often late at night. After about three months, a security guard working at the compound tipped off local authorities, Men said, which prompted an investigation from district police who began patrolling the area.

They eventually assigned someone to go inside the facility to gather more information, tapping a former employee who used to work security there.

Men said he knew Ye, and had held a favorable opinion of him based on his personal conduct. Though he said villagers had been afraid when Ye’s apparent business had been up and running, he said the man himself had seemed decent.

“He was a simple man, friendly. He seemed to be close with people,” Men said.