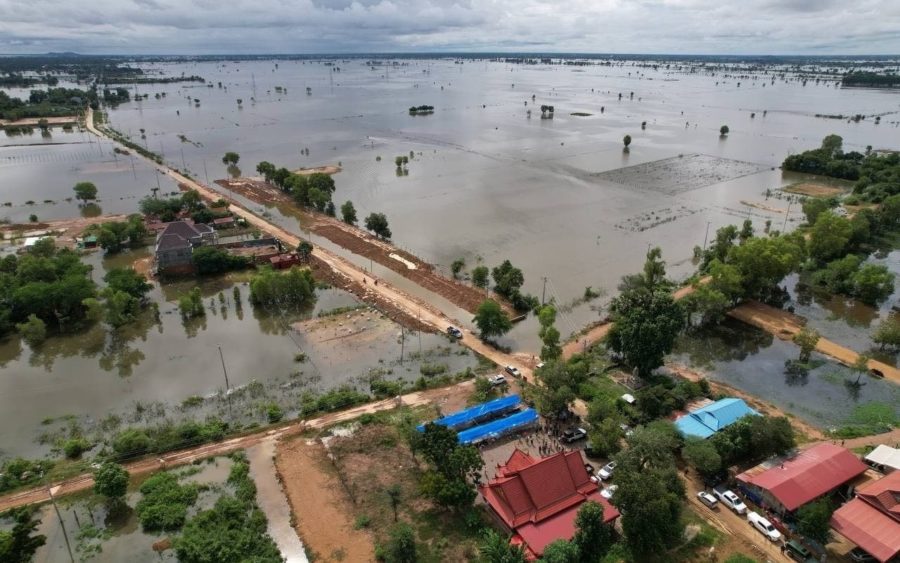 Thousands of families are affected by flooding in Banteay Menachey province, destroying state infrastructure and 25,200 hectares of crops. (Supplied)

Flooding in Banteay Meanchey province has affected 18,715 families, causing 1,150 of them to be evacuated, the National Committee for Disaster Management said, as local officials spoke of flooded schools, setting up tent shelters and transporting vulnerable residents.

As of Tuesday, residents in 38 communes were affected, according to the committee. Two health centers and 26 schools were also flooded, while 25,223 hectares of rice was inundated, it said.

Sek Sekhum, director of the provincial information department, said provincial military and military police were deployed to Mongkol Borei district to take older residents and others in vulnerable situations to higher ground.

Authorities had prepared tents to house 2,000 to 3,000 families, Sekhum added.

The rains and flooding were expected to continue into October, he said. Fifty schools had been closed amid the flooding, he said. “The students cannot study because those are in the lower areas.”

The district was prepared with boats and tents to rescue residents, he added.

The communes of Banteay Neang, Bot Trang and Russei Krork had faced evacuations due to severe flooding, Sinang said. More than 270 families in those areas had been evacuated, he said. For evacuated residents of Russei Krork, most had relatives in safe areas to stay with, he added.

Across the district, about 100,000 hectares of rice was underwater, he said.

“We are not worried about anything because we have made preparations,” Sinang added.