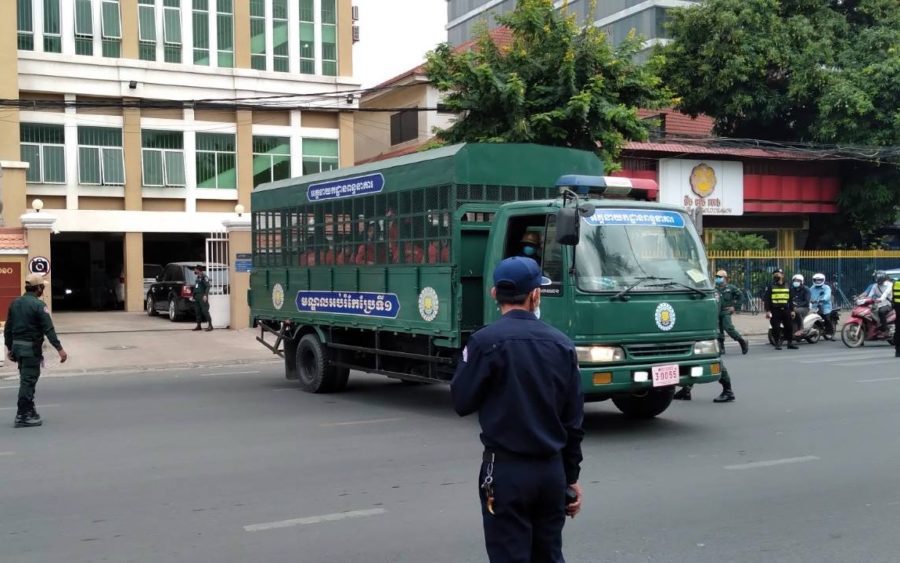 Thirteen CNRP defendants in the CNRM trial arrive at court where they and eight others were convicted on Thursday. (Ouch Sony/VOD)

At least 13 former CNRP activists who were convicted in March for their involvement in the formation of the overseas CNRM opposition movement and for comments about the Covid-19 response appealed their sentences at the Appeal Court on Tuesday.

Twenty-one CNRP leaders and activists were convicted in March, of which seven party leaders were given 10-year sentences, and the others handed more lenient sentences. They were convicted for incitement, plotting and incitement of the military to disobey orders.

The grounds for the case have spanned a long list of events such as Sam Rainsy’s planned 2019 return, comments about Covid-19 and the formation of an opposition movement overseas called the CNRM.

The appeal was made by 13 activists who are still in the country, and it was unclear if the ten others are part of the appeals process. The 13 activists are Chhun Bunchhat, Long Phary, Khut Chroek, Sun Thun, Yim Sareth, Khim Pheana, Thai Sokunthea, Keo Thai, Nhem Van, Chum Chan, Sok Chantha, Piet Mab and Ngin Phea, who is named Ngin Kheang in court documents.

Six defendants were questioned Tuesday morning and seven others in the afternoon.

Speaking in court, Nhem Van denied the charges brought against them and said he had no knowledge of the formation of the CNRM. He did give a media interview that he would go to greet former CNRP president Sam Rainsy as part of his attempt to return to Cambodia in November 2019, but had no intention to gather people for the event.

Rainsy failed to return to Cambodia, in part due a Cambodian government directive preventing Asean countries from allowing Rainsy to transit to Cambodia.

Sok Chantha, another accused CNRP activist, said he had no connection to the CNRP after it was dissolved by the Supreme Court.

A verdict is expected on September 13.