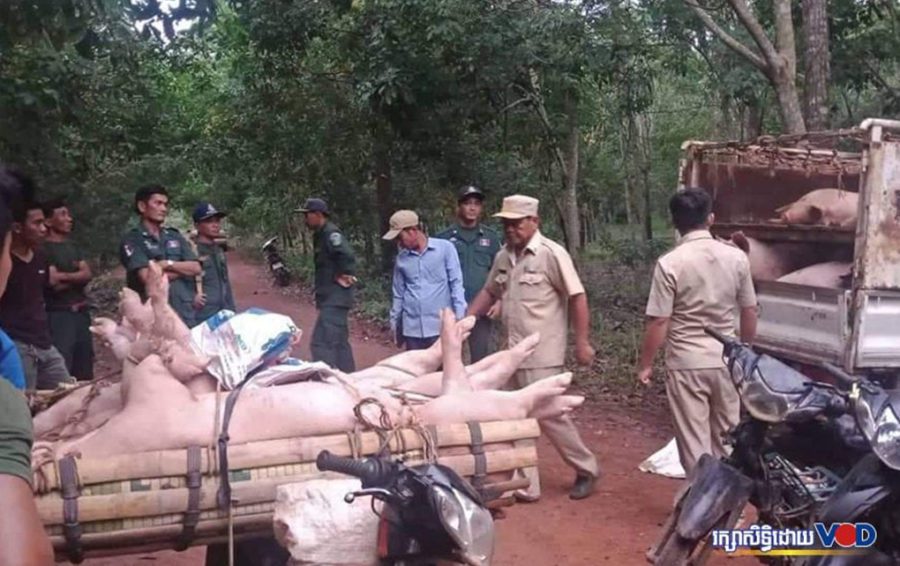 Nearly 1,500 illegally imported pigs have been seized in 55 busts against smugglers from African swine fever-ravaged Vietnam, while 2,000 Cambodian hogs worth about $500,000 have died from the disease or been culled so far, Agriculture Ministry officials said.

Tan Sophannara, director of the ministry’s animal health department, told a press conference at the Council of Ministers on Thursday that the government needed to maintain its vigilance against illegally smuggled pigs, though blood tests on the captured hogs so far from the past six months had returned negative.

“All the pigs were tested but we did not find anything,” said Tan Sophannara.

The animal health department said the disease, which is harmless to humans but almost always lethal for pigs, can be transmitted by diseased pigs, food waste, parasites, rats and through the air.

Following outbreaks in Ratanakkiri and Tbong Khmum provinces, 2,000 pigs have died, with 800 of them killed to prevent the disease’s spread, it said.

More than 2.5 million pigs have been culled in Vietnam due to the virus, and its spread in Cambodia could devastate the local industry.

Srun Pov, president of the Cambodian Livestock Raisers Association, said the disease had already spread throughout Vietnam and no pigs being imported from the country should be considered as safe.

Authorities must prevent all trafficking, both small-scale and large, along the border, he said.

“It is surely being transmitted by the imports,” Pov said. “In Cambodia it has already happened in a few provinces. The question is how much can we protect ourselves?”

On Monday, the Agriculture Ministry issued directives to the governors of Svay Rieng and Takeo province reinforcing the need to prevent the import of diseased pigs and pork from Vietnam.