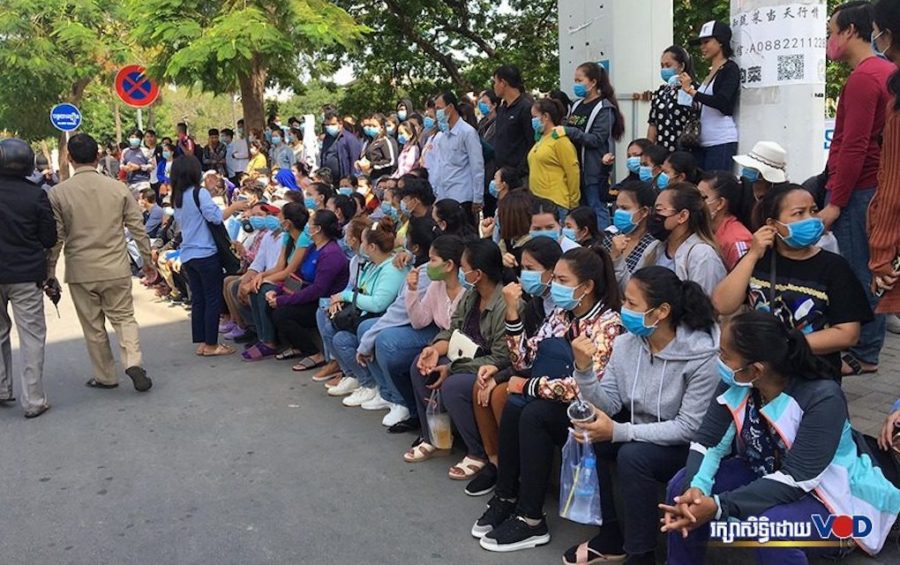 Casino workers from NagaWorld are collecting thumbprints to file a complaint with the Labor Ministry after the gambling behemoth began the process of laying off more than 1,000 workers last week, allegedly targeting union leaders and members.

More than 1,300 workers at the Phnom Penh casino are set to be laid off, with hundreds receiving dismissal letters last week, the company claiming the retrenchment was necessitated by declining revenues.

Chhun Sokha, the vice president of a NagaWorld workers’ union, said they were asking workers in Phnom Penh, and those who had left for their provincial homes, to thumbprint a complaint against the dismissals. They had received 1,500 attestations, she said.

“There are still some union members and staffers who are asking for the deadline to [thumbprint] be extended because they are in the provinces or unable to come,” she said.

“Some of them sent the [thumbprint on the] document by taxi or bus, and it hasn’t arrived. So it could be delayed.”

Sokha said the casino did not follow labor guidelines before dismissing workers, and vowed to challenge management’s decision.

The dismissals come as the casino and hotel company reported a net profit of $102 million in 2020 despite the Covid-19 crisis, down from more than $521 million in 2019.

But Makara, a room attendant who was also offered a severance package, said he refused to accept the casino’s offer and has signed onto the union’s complaint for the Labor Ministry. Makara said the dismissals were a clear attempt to disband the union.

“All the union leaders and their groups were finished completely,” he said. “So, if we don’t demand that they [stop the layoffs], NagaWorld will not have a union anymore.”

Hay Sopheap, a dealer who was laid off, said she too gave her thumbprint for the complaint to express solidarity with the union, and hoped that the Labor Ministry would intervene and get the casino to reverse the dismissals.

“I hope that the complaint that I submitted to the Ministry of Labor will encourage the company to reconsider the layoffs,” she said.

Sokha said that the casino company should also reinstate workers who were pressured to accept compensation packages, provide fair severance packages and ensure Covid-19 measures are implemented at the casino.