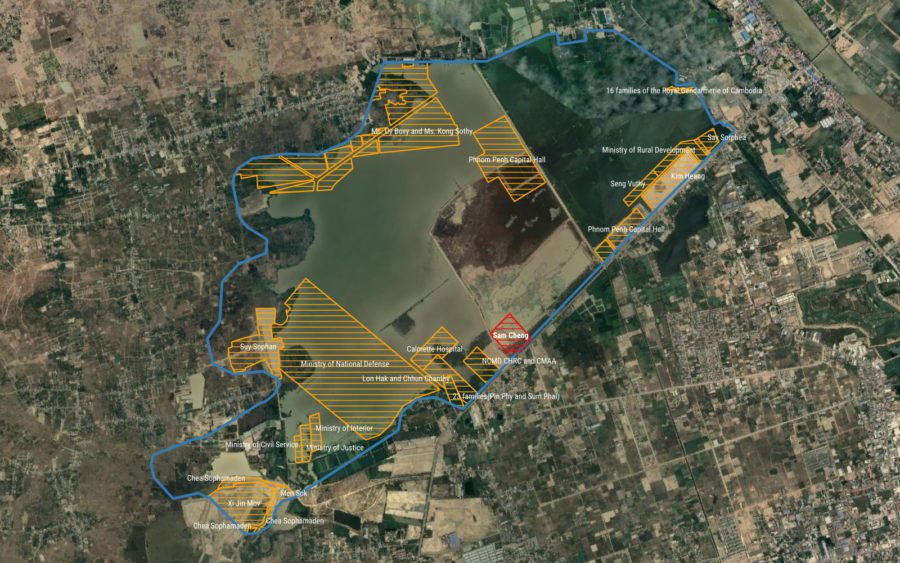 A further 20 hectares of Boeng Tamok, one of Phnom Penh’s “last lakes,” is being granted to a private individual, with mapping coordinates appearing to show the plot is on an area that is already being made landfill.

Coordinates on the sub-decree place the plot near the center of the lake’s southeastern edge, on an area that has seen major landfilling over the past year. The filling has turned the middle of the lake into land, dividing Boeng Tamok into two halves. Much of that central landfill has yet to be allocated to individuals or institutions, according to data from sub-decrees and urban rights NGO Teang Tnaut Sahmakum.

Government spokesperson Phay Siphan referred questions to Phnom Penh City Hall, though he noted that some areas of the lake were used by locals to grow dry season rice, and Prime Minister Hun Sen has wanted to give the land to some of those individuals.

“The Council of Minister just issues the sub-decrees about how much to cut off, but the one that allows it to be cut off is local, like City Hall or province halls,” Siphan said.

“They are just workers and, yes, they get benefits, but not a lot,” he said. “Most of them are fishermen and farmers. When it becomes commercial, they will get very little.”

He added that he did not know the recipient of the latest land grant.

“I am not familiar with Sam Cheng. She lives outside our commune. I do not know her. Her name was given land by sub-decree by the samdech,” Sin said, referring to Hun Sen.

Previously, tracts of the lake have been granted to the land management minister’s daughter, late Borei Keila tycoon Suy Sophan, the military and various government institutions.