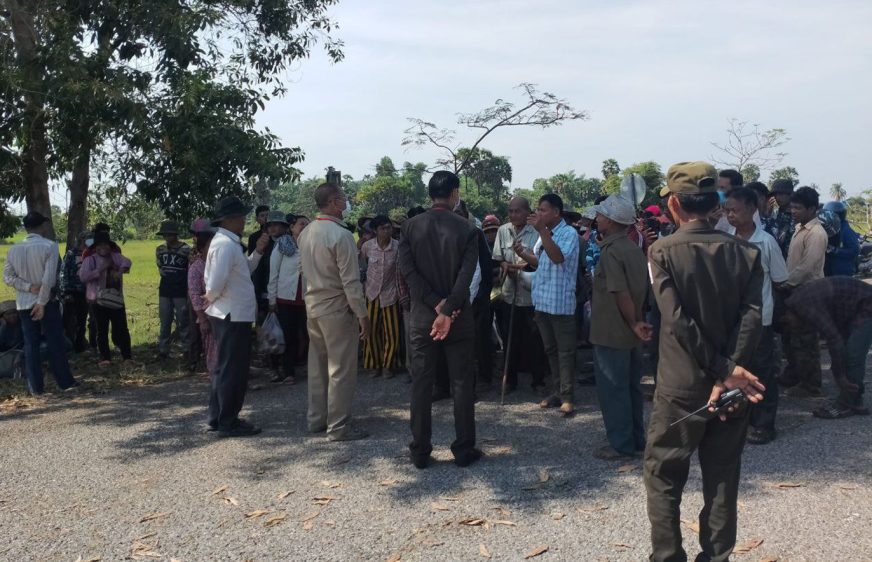 Siem Reap residents gather to petition the Apsara Authority over land they say they lost in 2005 and is now being used to house Angkor evictees, on October 25, 2022. (Supplied)

More than 200 Siem Reap families say they are still owed compensation from the Apsara Authority for land being used to resettle displaced villagers from within the Angkor Archaeological Park.

About 100 people representing 210 families gathered at the Apsara Authority office in Siem Reap on Tuesday to demand compensation they say they were offered back in 2005.

At the time, the authority fenced off 160 hectares the families had been using for farmland, said protester Sam Mom.

The land was in what is now Run Ta Ek commune, which is being used to resettle Angkor families, though at the time it fell within the jurisdiction of neighboring Balaing commune, Mom said.

The offer for compensation was just $500-$700 per hectare, but the families never received the money, he said.

People thought they had lost the land for state use, but now that it was being given to other people, they felt cheated, he said.

“That’s why people feel hurt and submit complaints asking authorities to find a solution for us. At first, when the Apsara Authority fenced it off, we thought they would keep it as state property and that’s why people didn’t protest, weren’t feeling so irritated. But in fact, they took our land to hand over to people illegally living in the Angkor area.”

Another resident, Hun Von, said redistributing their land to other people felt like an injustice. The families had had a hard time for 20 years without their farmland, she said, adding that her family had had 2 hectares in the area.

Apsara Authority spokesman Long Kosal declined to comment, saying he had yet to see the petition.

Protester Mom said an Apsara official had taken the petition in the morning, but had passed it onto commune authorities in Balaing and Run Ta Ek.

Balaing commune chief Lem Sinat said the case was beyond her jurisdiction. The dispute started in 2005, there were only 44 families with claims to the land, but those families had grown to 210, Sinat said.

“This case is an old case from a long time ago. We don’t know how to handle it, but we will not leave this case aside, we will send it to the district, province and Apsara Authority to intervene for a solution. This is the only way because we have no ability to solve it.”

On Monday, the same villagers had petitioned the provincial administration, but an official there refused their petition saying they had no clear documentation of their former ownership.

Prasat Bakorng district governor So Platong said on Monday that the case was new to him but he would look into it.

Thousands of residents from within Angkor Archaeological Park have protested over their uncertainty as some park residents have faced displacement, with the government saying their settlements put the park’s Unesco world heritage status at risk.