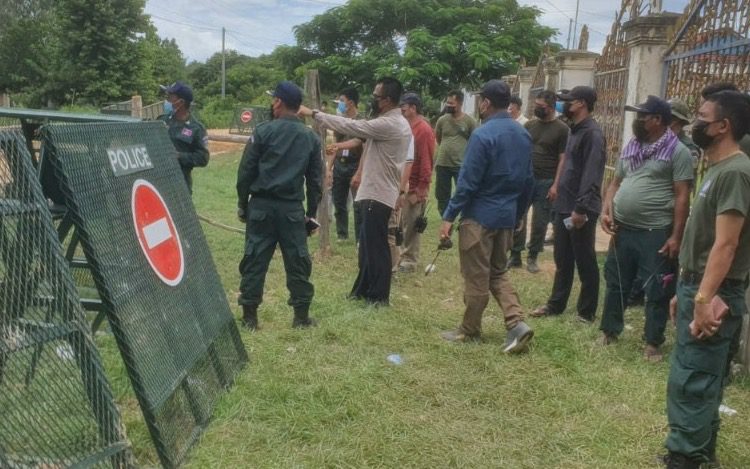 Kandal police officers photographed during the standoff with villagers on Sunday, in a photo posted to their Facebook page.

Luong Srey Mom, 51, said she would be staying away from her home at the disputed airport development site.

She was just released Tuesday evening after two days in police custody, as violence emerged in the escalating airport conflict in Kandal province.

Tycoon Pung Khiev Se, together with the state, is building Phnom Penh’s new airport on a disputed site where villagers say they want fair compensation in line with market values. Land prices have rocketed after the airport was announced, and investors stand to profit from a proposed satellite city development across the area. Villagers with plots marked to be turned into lucrative developments say they want more than $8 per square meter to leave. But bulldozers have begun clearing their rice fields anyway, with police and military police on hand to stand guard.

Srey Mom said she was at Sunday’s protest, where people began throwing rocks at officers.

“Yes, there were bottles of gasoline thrown at police,” she added.

She had her phone confiscated, and was beaten and injured as she fled.

“I don’t know how they beat me. I know there were bruises all over my body after running. I collapsed face down to the ground and they surrounded me,” she said. “They attacked me and beat me.”

Srey Mom was questioned for two days at the Kandal provincial police headquarters. She said she was asked whether she had been hired to protest.

“I’m not hired by anyone. I came to protest to demand a higher price because I cannot accept $8. I want a reasonable price between $50 and $80 because $8 — I can’t buy any land.”

“Police asked what was wrong with my elbow,” she added. “I told them that police beat me. When I told them this, they asked a different question to divert the topic.”

She was told to stop protesting, and she told police that she would stop, while also asking for reasonable compensation.

Srey Mom said she understood that nine people remained in detention and would face charges of violence.

She said she would be spending her night with her children in Phnom Penh rather than going back.

Kandal prosecutors declined to comment on Tuesday. Provincial police could not be reached. Khiev Se has not responded to questions sent this week.

Kong Khorn, a villager in the dispute who was not arrested on Sunday, said the anger remained.

“They beat them like dogs and cats and destroyed people’s property,” Khorn said. “They blocked villagers from going to their own land. … We just backed them to go check their land, and now they’ve completely cleared the land without giving money. Now they put the blame on the villagers.”

Khoem Maly, another disputant, said villagers had for months successfully blocked the airport developers from razing their rice fields until police joined the fray.

“Before the authorities arrived, the company could not bulldoze our land. But the authorities came to prevent us from being stationed to stand guard over our land,” Maly said.

“How would you feel if someone bulldozed your land? How would you endure it?” she said. “We gathered rubbish and plastic and burned it, and the smoke hit them, and they used their water cannon at the fire and at the people, so we fought back.”

“They used guns to threaten us, and smoke grenades, and they beat us like cows and buffaloes. … They came to rob our property and confiscated 27 motorbikes and took my child’s computer and two tractors.”