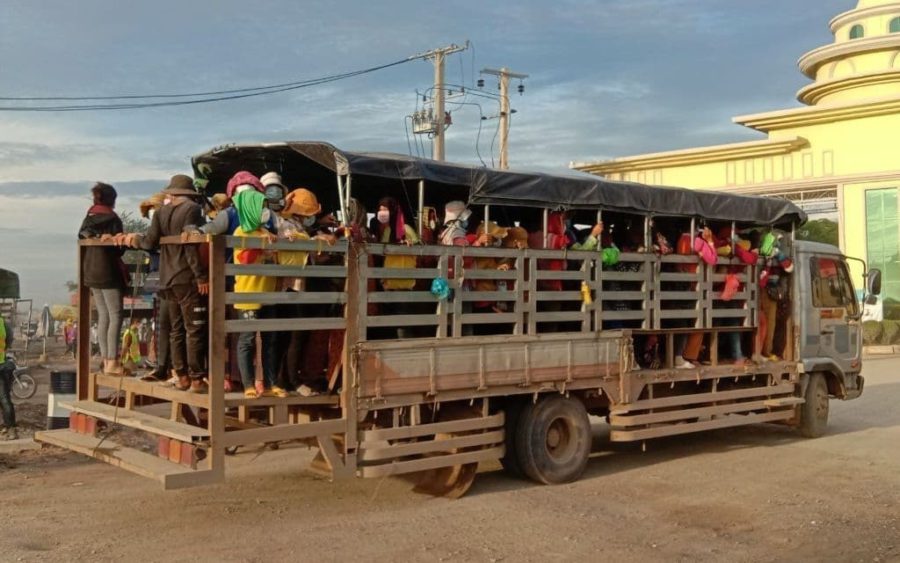 Garment factory workers commute on the back of a truck in Kandal province on September 21, 2021. (AIP Foundation)

Some 276 garment factory workers, mostly women, were injured in traffic accidents in the sector’s notoriously dangerous commutes on the backs of trucks in the first half of this year, according to official statistics.

Workers frequently stand squeezed in cages on the back of trucks for cheap transportation, a practice repeatedly raised as dangerous for many years. Women have lost arms in accidents and many workers have died over the years.

Among those accidents, those commuting by truck had six accidents leading to 276 injuries, 32 of them serious, according to the figures.

Both 2020 and 2021 have seen major disruptions to factory operations, but the figures are generally up compared to last year.

Workers, employers, the government and drivers needed to work together to at least have seats and reduce passenger numbers — though this would increase transportation costs, he said.

“The problem is that there is no money to change … for both drivers and related parties,” Panha said. “Money is really important, but we can have strategies to collect monetary resources and use it. If we have a commitment, we have clear information, we have a specific strategy and action plan.”

Workers would need to pay more for commutes, while the government and employers could help fund upgrades to trucks, he said.

Yang Sophorn, president of Cambodian Alliance of Trade Unions, said the situation had not improved for years. Drivers should be trained and managed, she said, noting that this had already been successfully done in the Koh Kong Special Economic Zone.

“If we don’t do it like that, I think the problem will still be there, and if both the government and the companies keep ignoring the issue of workers’ commutes, I think it will still be a problem,” Sophorn said. “But if we consider it as a collective issue and we take control of it under the management of the employers or the government, I think there will at least be some changes.”

Labor Ministry spokesman Heng Sour and road traffic police chief Thy Visal could not be reached on Tuesday.

An NSSF official, speaking on condition of anonymity because he was not authorized to comment publicly, said most accidents were occurring in Kampong Speu, Takeo and Svay Rieng provinces where there are factory clusters. Many drivers were taking risks, including carrying more passengers than their vehicles could safely fit. “That human factor is very important and we try to propagate to them about changing their behavior from risky driving to responsible driving to avoid accidents,” the official said.