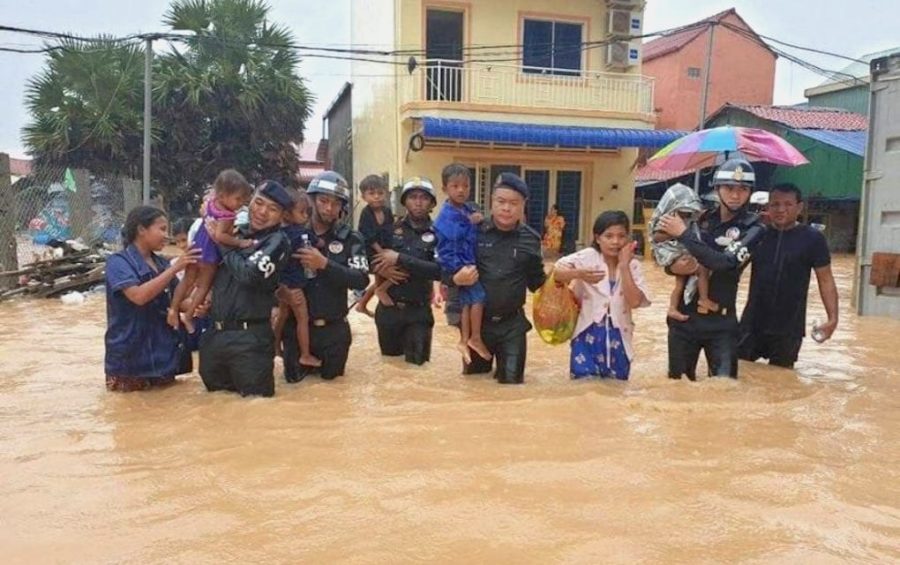 Three people are dead and power and water supplies have been cut from the entire city of Sihanoukville amid what local authorities are calling the worst flooding in Preah Sihanouk province’s history.

Provincial governor Kouch Chamroeun said a brick wall had collapsed on Friday in Sihanoukville’s Muoy commune, killing a couple who worked in construction. Another wall collapsed in the province’s Prey Nop district and killed a Chinese construction worker, Chamroeun said.

As the storm lashed the southwestern coastal city, felling power transmission poles, the electricity supply was cut across the province, he said. It was unclear when electricity would be restored, he added, with flooding likely to plague the province for the rest of the rainy season.

“This issue needs to be solved phase by phase and requires money and time,” he said in a voice recording distributed to reporters via WhatsApp.

Salim blamed the local construction boom — driven by an influx of Chinese gambling tourism — for the floods.

“Construction had required the filling in of land with soil, disrupting the flow of water. But we’re now responding with urgency,” Narong said.

He added that the heavy rain and flooding that the city had seen over the past two days were the worst recorded in Sihanoukville.

Four communes had been deluged and roads across the city were underwater, particularly those near municipal sewage systems, Narong said.

“We’re facing a worse situation than previous years due to the consecutive days of rain,” he said.

The flooding has also forced authorities to evacuate people from their houses, though the number of evacuated families was not publicized as of Friday evening.

In the 24 hours from Thursday to Friday, 270 millimeters of rain had fallen, the heaviest seen in the area for 30 years by almost double, he said.

Anco Group, the supplier of treated water in Sihanoukville, issued an emergency statement on Friday saying that the citywide blackout had disrupted its treatment capacity.

“This has affected the water supply in the whole of Sihanoukville,” the statement said. “Therefore, the supply of treated water has been cut off.”

The flooding has also closed a stretch of National Road 4 to traffic, according to an announcement from the provincial hall.

Correction: A previous version of this article incorrectly spelled and identified M’Lop Tapang.