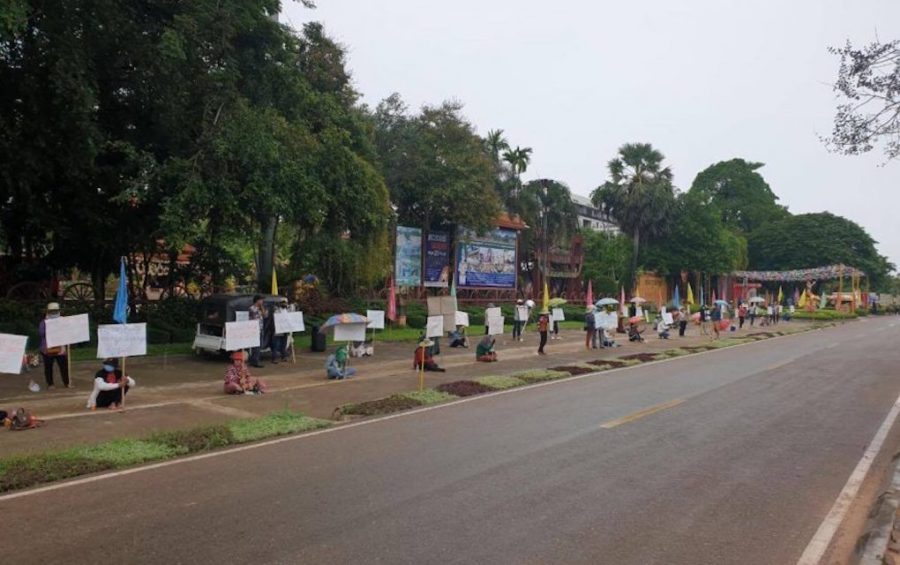 Workers from the Cambodian Cultural Village tourist attraction in Siem Reap City protest in front of the center on August 24, 2020. (Supplied by worker representative Lim Sopha)

The Cambodian Cultural Village in Siem Reap has announced its closure due to plummeting visitors amid the global pandemic, and follows workers’ protests for more than a month over salary cuts.

The theme park, featuring several model villages for Cambodia’s many ethnicities, will be closed from November 7, the company said in a statement dated Sunday.

Yeang Nyhor, 29, a driver for electric carts used in the park, said she had worked at the Cultural Village for seven years, and she was distraught about losing the first job she ever had.

“I had hoped to work at the Cambodian Cultural Village until I retired,” said Nyhor, a mother of two. “I feel shocked.”

“I feel hopeless and don’t know where to start,” she said.

Lim Sopha, the former head of the village’s art office, who has been leading the protests outside the complex, said all employees were surprised by the announcement, which meant the loss of all their jobs.

“It is very sad for everyone,” Sopha said. He said he hoped all workers would be compensated according to Labor Law requirements.

“If the company follows and respects the Labor Law, we will have nothing more to demand,” he said.

The park, which spans 210,000 square meters on a site along National Road 6, reduced wages by 20 percent in March as visitors to Siem Reap plummeted.

Hom Sophea, the company’s chief of administration, said the park has had hardly any foreign visitors since the Covid-19 pandemic, and only a smattering of local tourists during holiday periods.

“The number of guests has fallen a lot,” Sophea said. The park’s expenses remained high, and were unsustainable, she said.

Sophea added the company would compensate all its employees — more than 300 in total — according to the Labor Law, and the company had asked the provincial labor department for advice on the process.

“We are very sad because we’ve worked for many years, and when we close down, our workers feel sad because they have no work to do,” she said.

“We will go and have an actual look,” Chamroeun said. “The company [promised] to settle based on the Labor Law. It will be okay. Don’t worry.”