47 Airlines Warned of Prosecution if They Fly Rainsy Into Cambodia 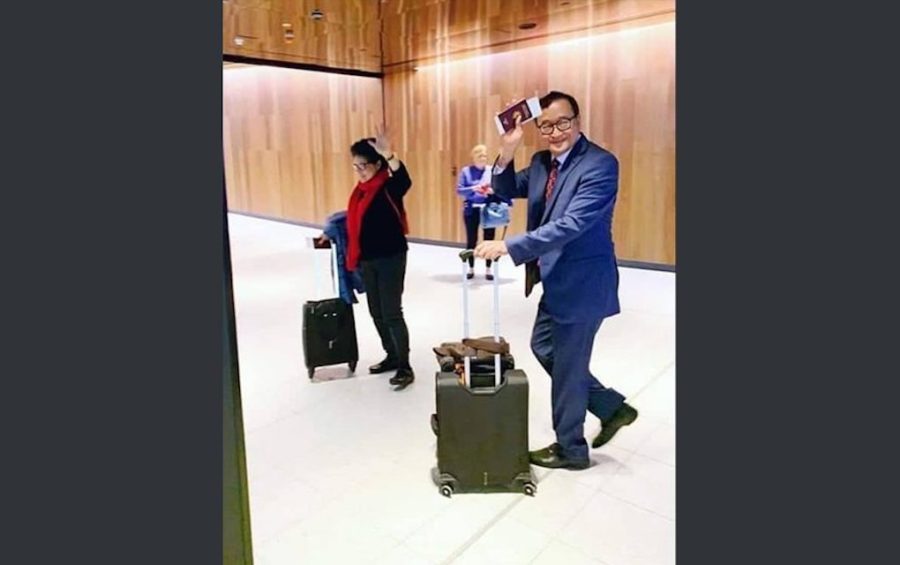 Sam Rainsy walks with his wife Tioulong Saumura while holding a suitcase and his passport, in this photograph posted to Sam Rainsy’s Facebook page.

Nearly 50 airlines have been warned that they could face criminal prosecution if they carry Sam Rainsy and other senior opposition officials into Cambodia, the Civil Aviation Secretariat has said, while Rainsy on Monday again vowed to return to the country this weekend.

The 47 airlines, both local and international, were briefed at a meeting with the state aviation authority on Friday, said Chea Aun, spokesman for the Civil Aviation Secretariat.

“Our measure is just to remind them about the court orders for arrests, and so who will dare to carry him?” Aun said, referring to Rainsy.

Rainsy has faced a series of criminal prosecutions, including most recently being charged for “attack,” defined in the Criminal Code as committing acts of violence against state institutions.

“We reminded them that like in other countries, how could you carry thieves? We were afraid that they did not know, and so we just let them know,” Aun said, adding that the 47 airlines covered every commercial passenger flight into the country.

“If they are careless, it will become their business and this would become a crime of conspiracy. If you know someone is a thief, why would you still carry him into somebody else’s house?”

In addition to the notice to airlines, armed forces have also been deployed in border areas near Thailand ahead of November 9, when Rainsy and other senior opposition leaders have vowed to attempt a return to the country.

Rainsy’s CNRP was dissolved in November 2017 after party president Kem Sokha was arrested for allegedly working with the U.S. to topple the government. Sokha, who remains under de facto house arrest in Phnom Penh, denies the accusations.

Rainsy has lived abroad since late 2015 to avoid court cases he calls politically motivated, and on August 16 made his latest promise to attempt a return to Cambodia.

Last week he said he was willing to risk his life and freedom in the attempt.

On Monday, Rainsy said in a nine-minute video posted to his Facebook page that he would arrive in Cambodia in five days as scheduled, despite threats from Prime Minister Hun Sen.

“Now, they [the government] has banned airlines from carrying Sam Rainsy by air to land in any of airports in Cambodia. However, our people and children do not worry as I will use all ways to really return to our home country,” he said.

Rainsy added that the measures to prevent his return showed Hun Sen’s fears that a democratic movement would lead to a change in political leadership and that a peaceful resistance gathering could not be stopped.

“Afraid? We are staying in the country, not running away from the country. If we are running out of the country, please say that,” Eysan said.

“Samdech Hun Sen has spent these [past] few days just to attend the Asean meeting in Thailand. Probably this evening or tomorrow, he will come back. He is not afraid of the rebel,” he added, referring to Rainsy.

National Police spokesman Chhay Kim Khoeun said forces held a training in the provinces of Battambang and Banteay Meanchey on Friday, and other units near the Thai border have also been activated.

“I cannot tell you how the armed forces have been prepared, just that they are ready,” Kim Khoeun said on Friday. “Previously we trained individually, but now we train together in order to respond to the situation of their attempt to cause chaos.”

CNRP vice president Mu Sochua said party leaders attempting to return to the country should be allowed to face charges in court, and denying their entry was a violation of the Constitution.

“We must have the right to return home. We’re prepared to face the courts,” Sochua said.

The warnings against airlines meant “Mr. Hun Sen is afraid of the popularity of Mr. Sam Rainsy,” she added.

“It is clear that Mr. Hun Sen is afraid there is a very big number of people who plan to accompany us,” according to Sochua, who was recently blocked from entering Thailand.

Justice Ministry spokesman Chin Malin denied any constitutional violations because the CNRP leaders were convicts and were not guaranteed the full rights of citizens, and because their plans affected national security.

“As convicted persons, some rights are seized and so these measures do not violate the Constitution,” Malin said.

However, political observer Lao Mong Hay said the government’s actions were eroding the public’s trust in the state.

“People’s confidence seems to be lost and people no longer trust them,” Mong Hay said.