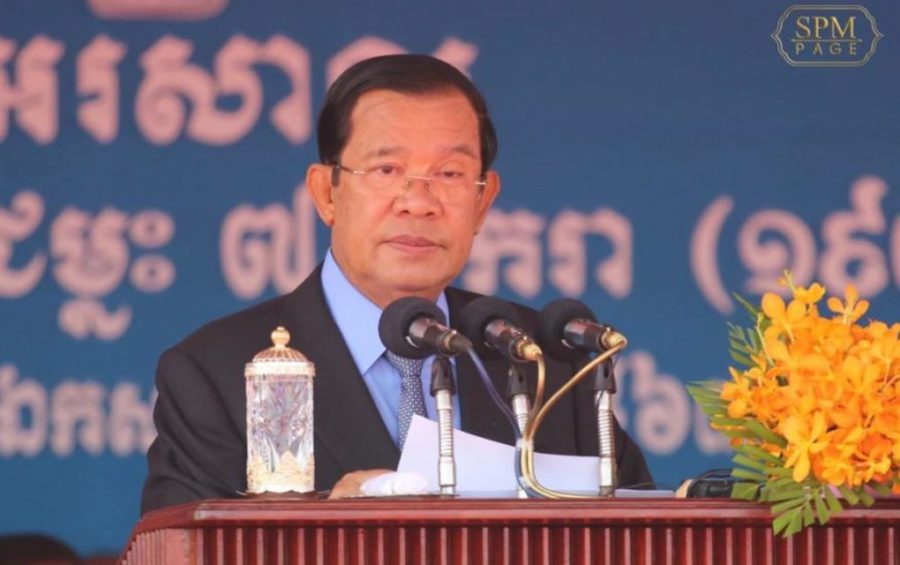 Prime Minister Hun Sen delivers a speech during an event marking Victory Over Genocide Day on January 7, 2020, in this photograph posted to Hun Sen’s Facebook page.

Prime Minister Hun Sen said on Tuesday that in the event of the death of Covid-19 patients, the bodies will need to be cremated. He ordered that Phnom Penh and provincial authorities make sure they have crematoriums ready in preparation.

“The municipality is building crematoriums, and [I’ve] ordered provincial leaders across the country to take action … to be prepared in the case of the death of people who are positive with Covid,” Hun Sen said in an audio message released Tuesday afternoon.

All those who die in the country of Covid-19, regardless of background, would need to be cremated because there may not be enough land to bury them otherwise, he said.

The decision was made to better control the potential corpses, seeing that the current Covid-19 outbreak had not dissipated, Hun Sen said.

“This point is understandable — although some traditions do not allow cremation, in the case of Covid, we have to strictly do cremation because we do not have the land for burial, one corpse here, one corpse there,” Hun Sen said. “Some countries use land and bury up to two or three [in a stack] and families cannot visit. For us, the use of burning and cremation is an easy measure to manage.”

Hun Sen’s decision comes amid the “February 20” cluster that saw 49 new cases announced on Tuesday. It is the largest Covid-19 cluster to date in Cambodia. One Covid-19 positive man died at the Phnom Penh Quarantine Center last week, though his death was attributed to drug abuse.

“Samdech techo prime minister urges preparation, to be ready for cremation in event of incidents caused by Covid-19, so as not to lose control,” Sreng said. “We will do this cremation according to technical specifications.”

Phnom Penh City Hall also announced that 23 locked down locations in the capital would be reopened, including hotels, houses, apartments and KTVs. Positive Covid-19 cases had been discovered in 17 of the locations, it said, but did not give further details.

Hun Sen on Monday night asked that state institutions and companies have their staff work from home where possible to reduce crowding in offices and on the streets. People should not leave home unless necessary, he said.

In Kandal, governor Kong Sophoan said authorities had traced nearly 6,000 direct and indirect contacts of the six Covid-19 cases in the province.

“We have those related people in the hotel and casino areas conducting quarantine,” Sophoan said.

The Education Ministry on Tuesday said private and public schools in Prey Veng province would be closed until further notice, with learning moving online. This was due to community transmission in Peam Ro district, it said.

The Health Ministry announced 11 new Covid-19 cases in the province on Tuesday morning, including seven residents of Peam Ro.

Several government institutions announced their work to keep staff at home and reduce services. The Transport Ministry asked its civil servants to report daily about their personal health, while saying driving tests would be suspended.

The Interior Ministry said prison guards would continue to work, but staff who can should stay away from offices, and also refrain from going to crowded places, touching one another, shaking hands, hugging or kissing.

The National Election Committee and the ministries of labor, education and finance issued similar statements.

Meanwhile, Senate spokesman Mam Bunneang said a draft Covid-19 law in the works was being fast-tracked, with an emergency session convened on Tuesday and the bill expected to return to the National Assembly on Thursday. The National Assembly could then send it to the king to sign, bypassing the Constitutional Council, because it was urgent, Bunneang said.

“The most important thing is containment. If we were to announce a lockdown of the whole country, it would be very significant and would worry other countries around us, Asean and the world, so investment would be at risk,” Bunneang said. “We need this law so we can close small things like homes or hotels or clubs and we can let our economy run normally.”

Bunneang added that the penalties — including jail terms up to 20 years — were not unreasonable.

“We’ll punish those who are crooks. For those who obey the law, there is no problem,” he said.