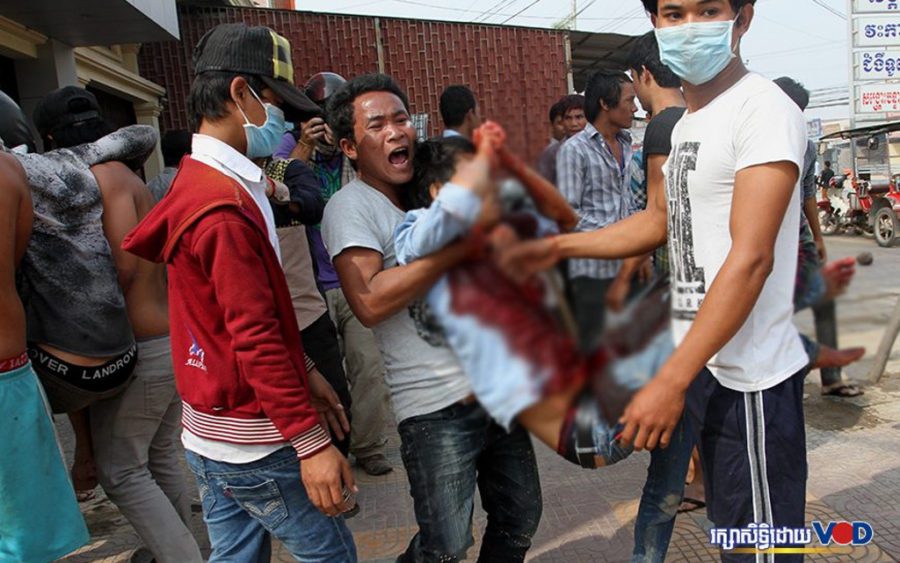 Workers carry an injured protester after a clash with armed forces on Veng Sreng Street in Phnom Penh on January 3, 2014. (Panha Chhorpoan/VOD)

Friday six years ago, thousands of garment workers went — like they had for weeks — onto the streets in Phnom Penh to protest for higher wages. At the end of the day, four of them were dead. One remains missing.

The workers met a violent crackdown in front of Canadia Industrial Park along Veng Sreng Street by special forces who fired bullets into the crowds on January 3, 2014.

“Every day, my daughter asks ‘Mom why don’t we have a daddy? Mom, why do I not have a papa like the others,’” the wife of victim Sam Ravy, Chheav Phanith, under tears told attendants of an anniversary event.

At the Center for Alliance of Labor and Human Rights (Central), Phanith on Friday called on the government to take responsibility. “I would like to ask the government to please find a solution for all families of the dead, find justice for them,” she said.

But Vorn Pov, Independent Democracy of Informal Economy Association president, who was beaten up during the crackdown, on Thursday said justice was unlikely. “So far, justice seems as far away as the horizon, or like searching for a needle in the bottom of the sea. We have not yet seen the light of justice for us,” he said.

At the event on Friday, Pov said the country would only have peace if social justice was achieved. “Peace is possible only if there is peace through the physical and the mind, and those of us who suffered injustice do not yet have peace of mind. So I think that there is no peace as long as there is no social justice.”

Khim Soeun, father of Khim Sophat from Svay Rieng province who went missing during the crackdown, echoed similar sentiments, saying he was not confident the government would find justice for the families. “[I] would like to appeal to all international organizations to find justice for my family.”

But Justice Ministry spokesman Chin Malin on Thursday said that the government had to prevent an uprising during the protests, which he said was led by a party. “If this group [of workers] are really hurt or are missing, then the responsibility will fall on the group or political party that organized the uprising and led them to hold violent protests to overthrow the government,” he told VOD over WhatsApp.

But Sam Sary, the brother of Pheng Kosal who died after being shot, said it was the government’s responsibility as the protest was not related to politics and workers had merely demanded an increase of their minimum wage to $160 a month.

The opposition Cambodia National Rescue Party had expressed solidarity with the workers and the protest coincided with demonstrations against 2013 elections, which the opposition claimed was rigged.

Soeng Senkaruna, a spokesman for the Cambodian human rights group Adhoc, said that those who ordered the forces to violently crack down on the workers bore responsibility. “Therefore, our civil society has insisted on forming an independent research or investigation team … that is not within the government,” he said. “So far, we have not seen any action taken to find the perpetrators who shot and killed the workers.”

According to human rights NGO Licadho’s statistics, 38 people were injured during the protests, mostly by bullets, and 23 union leaders and activists arrested and imprisoned for five months. Six union leaders were sentenced to two years in prison each in December 2018, although their sentences were all suspended.

(Translated from the original article on VOD Khmer)