600 Jobs in Limbo as Fire Burns Down Factory 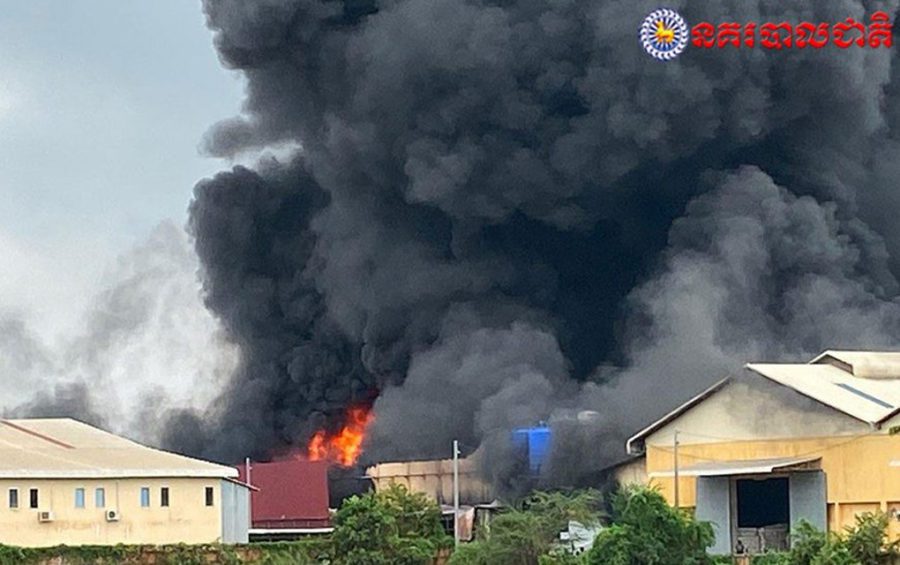 A gas explosion in the early afternoon on Monday sparked a huge fire at a Phnom Penh factory that burned for 12 hours before being finally put out, razing the building to the ground and putting about 600 employees jobs in jeopardy.

Some of the factory’s workers told VOD they were worried about their livelihoods. A union said the factory should pay compensation unless the fire was caused by a natural disaster, and a factory administrator said the company would find a “peaceful solution” for its workers.

The fire at Aqua Performance, a Chinese-owned factory in Dangkao district’s Prey Sar commune that manufactures life jackets and school bags, ignited at about 1 p.m. on Monday due to a gas explosion, said district deputy police chief So Visal.

Visal said firefighters worked until 1 a.m. to put out the fire.

Factory administrator Ung Kongheng said the building was completely burned to the ground, though the company was still assessing the damage. None of the more than 100 employees working on the Water Festival holiday were injured.

The factory would look into what it could do for its employees until then, he said.

“The factory’s stance is there could be a rebuild,” he said. “We will find a good solution for the workers. We will not stop them from working. … Tomorrow or the day after tomorrow, we will meet with them and find a peaceful solution.”

However, worker Im Sam Ath said she was concerned about how she would support her family now that it appeared she was abruptly out of work after four years at the factory.

“I won’t have a job to support my children. Right now I don’t know what to do,” Sam Ath said.

Another worker, Sok Dina, said she would first wait till she met with factory management before starting to look for a new job.

“The owner is good and this factory pays workers on time and he never causes problems with workers,” Dina said. “But we are worried.”

Seang Yout, a dispute resolution officer at the Coalition of Cambodian Apparel Workers Democratic Union, said that unless a factory fire was caused by force majeure — a natural disaster or some other external circumstance such as war — the company should be liable to pay compensation to workers.

“It will be the duty of the employer to compensate the workers in accordance with the law” unless the fire was sparked by “natural disaster or lightning,” Yout said.

In January, the National Police’s fire department said that 538 fires across the country last year caused 17 deaths and injuries to 52 people.