66 Kg of Trafficked Geckos Seized From Vehicle in Siem Reap 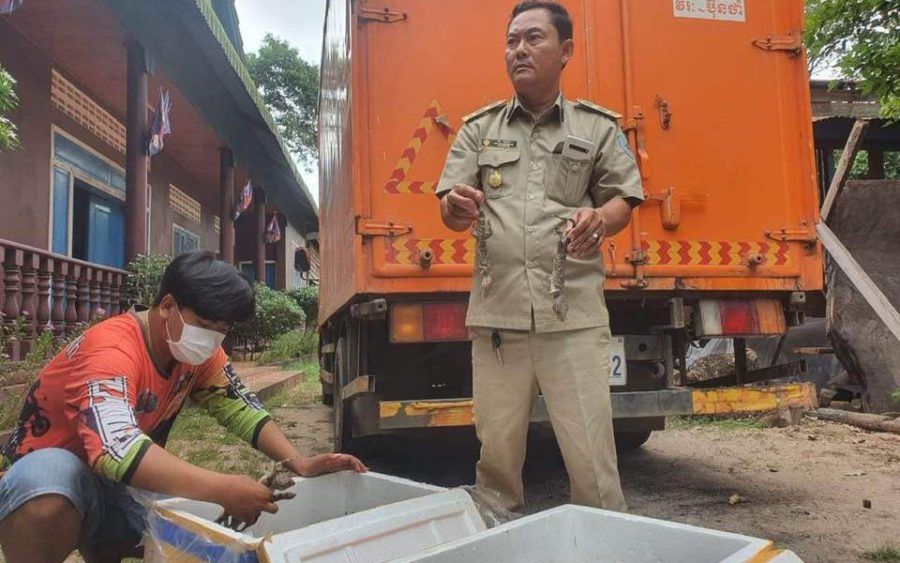 A forestry official holds up confiscated dead geckos from containers that were confiscated in Siem Reap province, in a photo posted to Khieu Khanarith’s Facebook page on August 17, 2021.

Nine-hundred-eighty-four geckos being shipped out of Preah Vihear province were rescued from a vehicle in Siem Reap, according to officials, who said they had cracked down on gecko trafficking before but didn’t know its purpose.

Mong Bun Lim, an administrator at Siem Reap’s Forestry Administration, said officers had seized two boxes being delivered from Preah Vihear with about 66 kilograms of geckos, and impounded the vehicle at the local forestry office. The transport company would be fined under the Forestry Law, he said.

“No one would answer where they want to take the geckos, and what the goal for those animals were. They might be eaten, made into medicine or exported somewhere,” Bun Lim said.

An administrator for the Agriculture Ministry in Siem Reap, Tea Kim Soth, also said he did not know the direction that the contraband was headed after Siem Reap.

“The case involves geckos, forestry and wildlife laws, and a carrier company, but there may be some exceptions in the case if the bus was only for passengers, not deliveries,” Kim Soth said.

Authorities were trying to track down individuals involved in the shipping, but had not been able to reach either the sender or receiver as they had turned off their phones, he said.

“Previously, we’ve fined $5 per [seized] gecko, and the charge will now be triple,” Kim Soth said. “If the company is not able to resolve the case, the case will be sent to court for settlement.”

Virak Buntham Express Tour & Travel published a Facebook post about the incident on Wednesday saying that the company was being unfairly penalized.

“Why did you know there were geckos in the truck? Where are they from? Is this a trick? With all information on the sender and receiver, you should catch them. Suddenly fined for $30,000 in exchange for release [of the vehicle]? Is this the law?” the post said.

“The rules of the company are that it doesn’t have the right to inspect customers’ goods. The company hopes to get justice.”

Virak Buntham managers could not be reached for comment on Wednesday.

Photos posted by Information Minister Khieu Kanharaith show larger, spotted geckos in the two seized boxes. According to National Geographic, one such gecko species in Southeast Asia, the tokay gecko, is widely traded as a traditional medicine, aphrodisiac and energy drink, despite lack of proof of their efficacy. They are mainly exported to China, Taiwan, Hong Kong and Vietnam, it says.