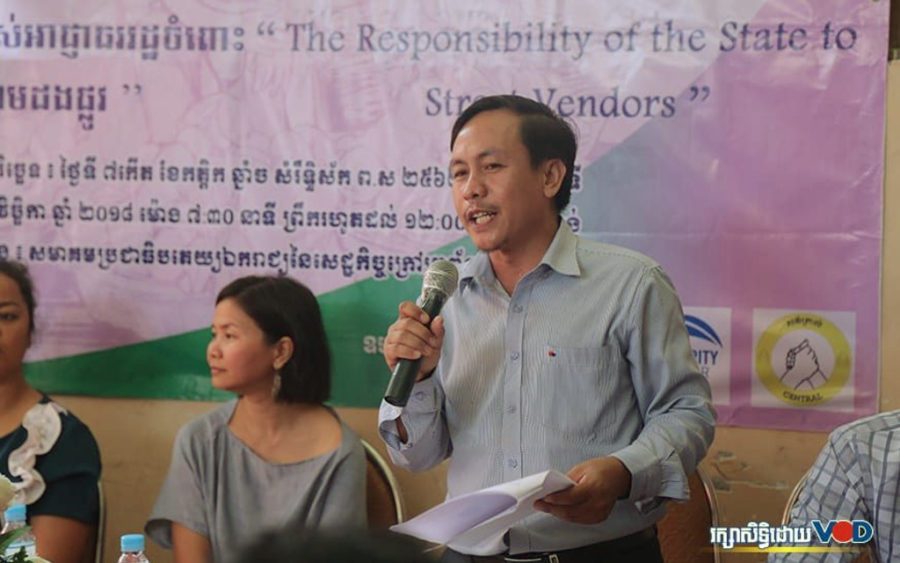 Police have targeted seven unions and associations for a “survey” of employees and their documentation, though a police official said the project has been put on hold for now after investigating two of the groups.

Cambodian Independent Teachers Association (CITA) director Ouk Chhayavy said six officers came to investigate her organization on September 3, questioning her about the scope of its work.

“They should not come to ask because we have already submitted [documents] to the Interior Ministry about what sectors we work in,” Chhayavy said on Tuesday. “The goal of the survey is to threaten associations and unions.”

The government appeared to be cracking down on any group that might lead a protest, she said.

Rong Chhun, a unionist and former president of CITA, was arrested in late July over claims he made in a radio interview about Cambodia losing territory to Vietnam along the border. At least nine youth activists have been arrested since, some for protesting in support of Chhun.

Vorn Pao, president of tuk-tuk drivers union Independent Democracy of Informal Economic Association (IDEA), said his organization had been next in line for the survey.

According to Pao and a police document seen by VOD, the seven organizations listed on the survey notice were CITA, IDEA, labor rights group Central, the Cambodian Youth Network, the Coalition of Cambodian Farmer Community, and unions the Coalition of Cambodian Apparel Workers Democratic Union and the Cambodian Alliance of Trade Unions (CATU). CITA and CATU are the only groups that have been surveyed so far, according to Pao and a timetable on the document.

IDEA was scheduled for an inspection on Monday, but local authorities had delayed the survey, Pao said.

“They said they just want to update the number of Cambodian people, foreigners, workers, employees, and check the director’s documents and other personal documentation for the director … and ask each staff [for documentation],” he said.

He said he did not think the survey was legal. “It causes fear, because the political situation is getting more complicated,” he said.

A deputy Meanchey district police chief, listed as a contact on the survey document, said it was the job of authorities to oversee organizations.

“I instructed the local commune police and commune officials to make a report. … Our unit needs to know the structure of the NGOs, including director, deputy director and how many — we are a controlling unit.”

He added that the survey had been suspended, and hung up without giving his name.

Interior Ministry administration department director-general Prak Samoeun could not be reached for comment.

U.N. human rights special rapporteur Rhona Smith said in a Facebook post that she was monitoring the situation.

“I have also been closely following reports that seven different CSOs have been searched or informed of pending visits by the authorities since last week,” Smith said in the post, which also highlighted the arrests of three environmental activists on incitement charges.