A CNRP Mass Trial Closes With Pleas for Justice 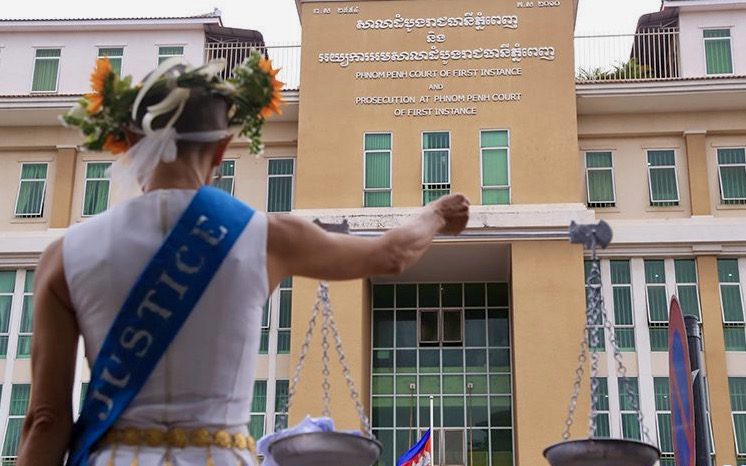 Seng Chan Theary, a defendant in the case, protesting outside a Phnom Penh court on May 3, 2022. (Hean Rangsey/VOD)

Defendants in an opposition mass trial argued at their final hearing that they were victims of a political war between Prime Minister Hun Sen and exiled politician Sam Rainsy, and asked for justice.

The case involves 60 total defendants, and related to the failed return attempt of CNRP cofounder Sam Rainsy in 2019.

Four defendants, who are in prison, were present for the three-hour closing hearing on Tuesday morning: Yok Neang, Kak Komphear, Heng Chan Sothy and Tum Bunthorn. They all used their last chance to appeal to the court to give them freedom.

Bunthorn, a former CNRP commune councilor, said political leaders were responsible for his plight, and asked that they stop using him and other activists as hostages in their power plays. He asked the two leaders — Hun Sen and Rainsy — to negotiate and end the hurt.

“Please, Hun Sen and Sam Rainsy, end the political war,” he said. “If someone is pointing a gun behind [the court], I will not get justice. The court is just a theater hall to show that the country has democracy.”

Komphear said he was accused of words posted by a Facebook account that wasn’t his. The Facebook account, Ratanakmini, alleged that Komphear had called for people to gather to welcome Rainsy in his attempt to return to the country. Komphear argued he wasn’t behind it.

“Who is Ratanakmini? I don’t know. It could be a spy from the authorities in order to put the blame on me,” he said.

He added that others who were charged alongside him had been cleared if they defected to the ruling party, and asked what exact law allowed the court to absolve people based on political affiliation.

Deputy prosecutor Seng Heang argued in his closing remarks that Rainsy’s return attempt in 2019 had ill intentions because it coincided with a holiday — and therefore could have potentially allowed many people to gather.

The defendants had also repeatedly raised and shared issues online of land disputes, deforestation and human rights, and this was intended to make people angry at the government, Heang said.

“The world has experienced this already. If we had not stopped [them] in time, Cambodia would have fallen into the fire of war,” he said. He also called for arrest warrants for defendants not yet in jail.

Defense lawyer Sam Sokong, meanwhile, told the court that there was not enough evidence to link his clients to CNRP leaders overseas.

Those opposition leaders had made announcements on online public channels, and people who saw such public announcements could not be accused of plotting as defined by the Criminal Code, he said.

“In this case, there is no evidence showing how they reported [to the alleged group] and how they contacted each other,” Sokong said.

The defense lawyer added that even the CNRP leaders in question were only politicians who aimed to participate in elections, and the party ­— dissolved in 2017 — had no intention or hope of violence.

“Even if the CNRP supporters wanted to use force, they wouldn’t be able to match the government’s modern and automatic weapons,” he said.

Prominent defendant Seng Chan Theary, a dual-U.S. citizen, did not attend the hearing. Her lawyer, Choung Chou Ngy, said the prosecution was stretching the charge of plotting to situations where it shouldn’t apply.

“Don’t extend it,” Chou Ngy said. “Don’t achieve the ambitions of the politician and give hurt to society.”

Verdicts are expected on June 14.