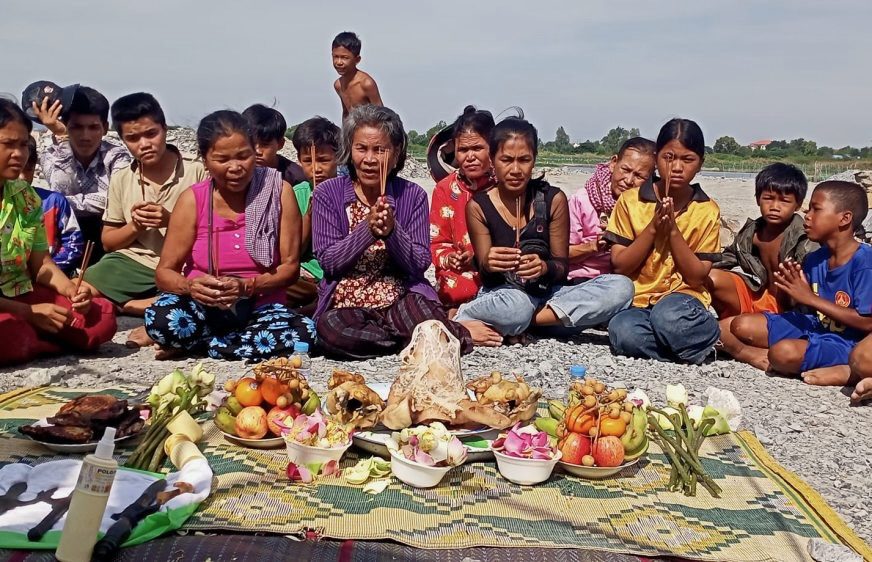 Residents next to Boeng Tamok hold a ceremony to curse those who took their land on November 9, 2022. (Sa Dava)

Residents facing potential eviction from the capital’s Boeng Tamok lake — which is in the process of being filled in with sand — held a “cursing ceremony” against the developers and officials’ relatives who are taking and selling their land.

About 50 people gathered in a circle with offerings of fruit, flowers and a pig’s head Wednesday as they burned incense sticks and shouted misfortunes they wish would befall the mix of tycoons and government-connected elites who have increasingly gobbled up portions of the lake over the past year.

“This cursing ceremony is for those who steal the people’s land [to suffer] in any way — drowning in a boat in the middle of the river. A plane crash. A car accident. Until they are all dead. If one of them is still alive, please go crazy,” said resident Sa Dava.

Dava said the residents’ curses were for those in private companies, officials and even excellencies, as the residents did not trust the authorities to find a solution anymore.

Boeing Tamok residents have been protesting off and on since 2016, when the lake was first reclaimed as state public land and then later state private land, allowing it to be granted to individuals. Since then, a web of well-connected people such as a senator’s wife, the land minister’s daughter and a pop star have received chunks of the lake.

Now with just 250 families remaining on the lake’s northeastern shoreline — and about two-thirds of the lake parceled off to individuals and government agencies — confrontations with authorities have become more frequent and heated, with residents stopping bulldozers from nearing their lakeside shacks and delivering petitions to various foreign embassies.

Seven protesters were summoned to court this summer after the district security chief accused them of blocking a roadway during a protest.

Like other protesters, Boeng Tamok residents were warned against disturbing “public order” during the Asean Summit taking place in Phnom Penh this week. But pockets of dissent have cropped up regardless, with five Khmer Thavrak activists launching a hunger strike in solidarity with imprisoned political activist Seng Chan Theary and NagaWorld casino workers continuing to call for fired union leaders to return.