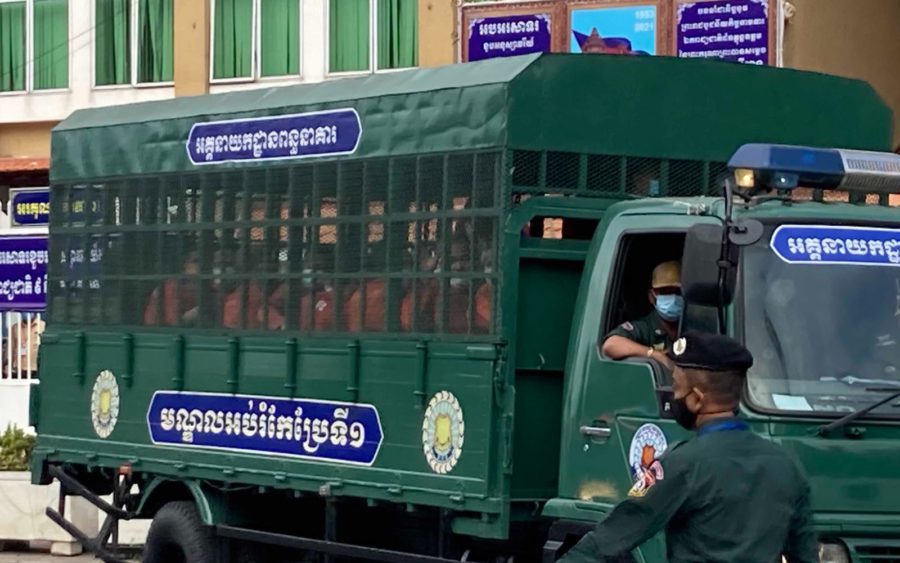 Defendants are brought in prison uniform to the Phnom Penh Municipal Court in an armored truck on December 9, 2021. (Ouch Sony/VOD)

An Interior Ministry employee, jailed for allegedly plotting to overthrow the government with the CNRP, pleaded his innocence on Thursday and reaffirmed his “love” for the government, as a Phnom Penh court resumed a trial against opposition members.

The Phnom Penh Municipal Court held its fourth hearing into charges against 21 people linked to the CNRP, after the trial was postponed because of the Covid-19 pandemic. The defendants are charged with incitement, plotting and inciting the military to disobey orders — relating to the formation of Cambodia National Rescue Movement by exiled CNRP members after the party was dissolved in 2017.

Chhun Bunchhat, an official at the Interior Ministry’s administration department, testified to having absolutely no link to the CNRP, pointing out that he was a member of a Battambang CPP district working group.

Deputy prosecutor Seng Heang said Bunchhat was arrested because he had allegedly told his cousin and CNRP member Hin Chhan that the CNRP would be allowed to return to politics.

Bunchhat said he had no idea of the CNRM’s plans or their messaging, nor did he participate in inciting people. He never shared sensitive information with his cousin, he added.

“I am a minor official. I have no national information to tell him,” Bunchhat said to another prosecutor in the case, Sam Rithy Veasna.

Bunchhat broke down under questioning from court-appointed defense lawyer Yong Phanith, who again asked him if he had ever shared information with his cousin.

“Did you ever tell Hin Chhan that CNRP will be allowed to return?” Phanith asked.

“I told them that I did not tell [Chhan] anything. If you don’t believe me, check my Facebook or my telephone,” Bunchhat said. “If [they] claimed that I support the opposition party, [they] should investigate what I have said.”

The court and prosecution then proceeded to question two CNRP commune officials — following a line of questioning used with other defendants about their links to the CNRP, relationship with party leader Sam Rainsy and plans for the CNRM.

Yim Sareth, a former commune councilor from Svay Rieng province, said he was affiliated with the Sam Rainsy Party in 2012 and then the CNRP, following the merger of the party with Kem Sokha’s Human Rights Party.

Sareth was also asked about Chhan and if they had discussed the CNRP together. When Sareth said he did not want to accompany Chhan to welcome Sam Rainsy in 2019, prosecutor Heang accused him of lying and read out an earlier testimony from Sareth, in which he said Chhan had told him the dissolved party would be allowed to return.

Sareth was further asked if talked about the Covid-19 pandemic with Chhan. The charges also include comments allegedly made by CNRP members about the handling of the pandemic in Cambodia.

Sareth said he talked about Covid-19 with Chhan but did not remember what he said. He told defense lawyer Sam Sokong that his comments were his own and not directed by any CNRP leader.

“I talked by myself because I was worried about Covid and now it really is an issue. I myself got infected with Covid,” Sareth said.

Chum Chan was next in line for questioning. Chan said he had been a teacher since 1989 and later became a CNRP commune councilor from Prey Veng province. After the CNRP was dissolved, he became a motorcycle taxi driver and did not communicate with other party members. “I was only concerned about my livelihood,” he said.

Prosecutor Heang then pressed him on whether he commented about Covid-19 and Vietnam, and later asked if Chan “loved Sam Rainsy.”

“Sam Rainsy is a public individual and everyone loves him.” Chan said.

“If he comes, will you go to welcome him?” Heang asked, to which Chan said no.

“Why not? You said you loved him?” Chan asked.

“It is my right,” replied Chan.

The trial will resume next week.