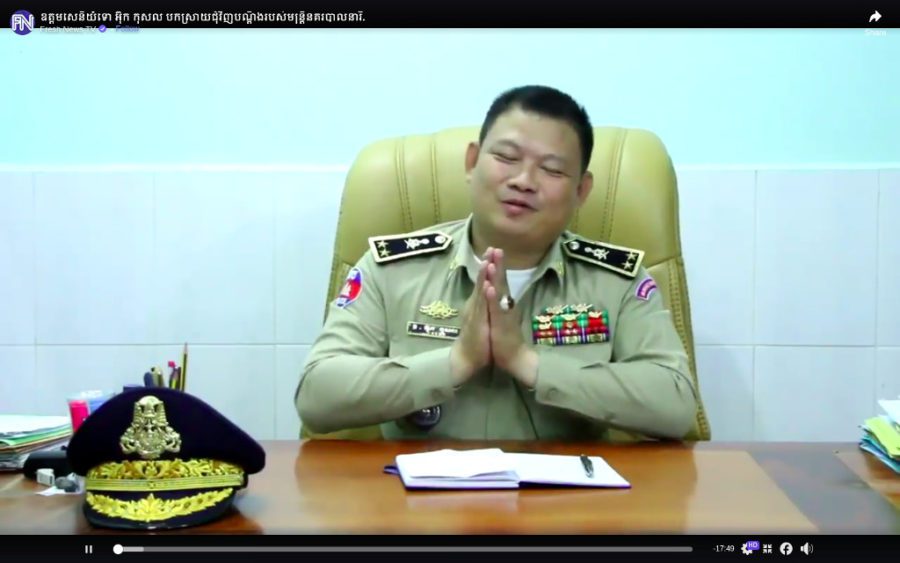 The suspended chief of the Kampong Thom provincial police has said unverified sexual abuse allegations against him from several female police officers were part of a conspiracy to get him removed from his position.

Ouk Kosal, who was suspended this week, says in a video published by government-aligned media portal Fresh News on Friday that he was being framed by unnamed individuals, and that reports about his alleged physical and verbal abuse against women tarnished the honor of female officers, police across the country and himself.

“It is a systematic plot in order to topple me from the position of provincial police chief,” Kosal says in the 18-minute video.

He does not directly deny the allegations against him, which were detailed in an unverified complaint letter signed by six women and leaked to reporters last week.

In the video, Kosal says that since he started as the deputy provincial police chief in 2015 he has always tried to do his best at work in order to help his officers succeed and has paid attention to their well-being.

The accusations against him, he adds, may have resulted from dissatisfied officers who were reprimanded for poor work performance and were persuaded to lodge complaints by unnamed opportunists.

According to the leaked complaint, Kosal allegedly called women to meet him individually in his office at the provincial police station, and then questioned them about their rank, position and whether they wanted to be promoted. The chief told the women that he could help them if they agreed to have a romantic relationship with him, the letter says.

Kosal could not be reached for comment on Friday. None of the women named in the complaint have agreed to speak to VOD.

On Wednesday, Interior Minister Sar Kheng issued an order to temporarily suspend Kosal, requiring him to show up at the ministry’s personnel department office during work hours until further notice.

The day prior, Kheng said in a speech that he had issued a warning to Kosal once previously.

“I promised that after being warned, if there is no change, there will only be one more step, to remove [him from his position] or to levy more serious administrative punishment,” the minister said.

In the video published by Fresh News, Kosal says he is happy to accept Kheng’s decision and is looking forward to receiving justice at the conclusion of the official investigation.

Kosal also requested his superiors to take action against a supposed ringleader who repeatedly incited and caused disorder at his police station.

“I believe that the working group will inspect and consider cutting off the bad flesh to make Kampong Thom province become what it was before,” he said.