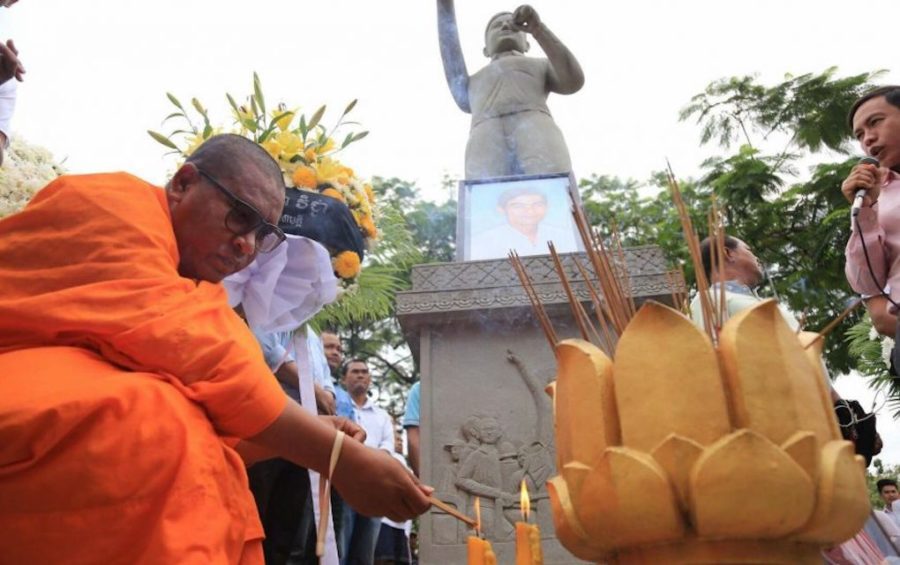 UPDATED at 9:04 a.m. — Cambodia’s chief monk has ordered Buddhist leaders nationwide to find and defrock prominent activist Venerable Luon Sovath, who was ordered to give up his monk’s robes for allegedly having sexual relations with women, a claim he denies.

The Siem Reap provincial monk council last week accused Luon Sovath of having a sexual relationship with women in violation of Buddhist disciplinary rules, but the monk on Wednesday denied the allegations, claiming video clips cited by monk and government authorities were doctored and the actions against him were political.

“I, Luon Sovath, have not been caught and eaten by crocodiles, tigers or snakes or been defrocked yet, and currently I am at a safe place,” he said in a Facebook post. The monk could not be reached by phone on Thursday.

In a letter signed by Non Nget, supreme patriarch of the Mohanikaya Buddhist sect, and dated Wednesday, the national religious leader said the provincial monk council’s actions had been conducted with transparency, justice and compliance to religious doctrine.

The letter claimed that Sovath had avoided the council’s order to defrock him, and it asked authorities and provincial monks to find him and enforce the decision “strictly and effectively” or take legal action if the monk is found wearing his robes.

If convicted for wearing Buddhist robes in public without authorization, Luon Sovath could be imprisoned for up to three months and charged a maximum fine of 500,000 riel ($125).

Duong Thavry, Siem Reap province’s deputy police chief, said on Thursday that police launched an investigation into Luon Sovath after a woman filed a complaint against the monk in relation to alleged pornographic photos or videos that he made with women with whom he was supposedly involved.

Police confiscated a Lexus 470 SUV, cameras, drone and phone from Luon Sovath’s relatives’ homes on Wednesday and sent the items to the anti-human trafficking and anti-cyber crime departments for investigation, Thavry told VOD.

She said two monks were arrested for questioning and were released on Wednesday. Luon Sovath said in his Facebook post that his “two nephews” were detained overnight and questioned at the provincial police station.

Luon Sovath said in the post that police confiscated a Lexus vehicle, nearly 10 cameras, a TV, refrigerator and documents from his father’s house, his nephew’s house and Wat Sleng pagoda in Siem Reap.

The Siem Reap Provincial Court prosecutor could not be reached for comment.

In a June 3 letter, the provincial monk council said it had conducted a hearing after seeing video that shows a phone playing a voice recording, in which a man’s voice, allegedly Luon Sovath’s, is heard saying he has a “deep” love for multiple women. The council said it interviewed a daughter and concluded that Sovath had sexual relations with women, which violates Buddhist religious rules.

The hearing followed a letter dated June 1 from Siem Reap provincial cults and religion chief Van Bunna asking authorities to investigate voice recordings between Luon Sovath and unidentified women, which were posted to the Facebook page “Srey Da Chi-Kraeng.” Videos were posted to the page on May 30, the day the page was created, May 31 and June 1.

Multiple videos posted to the Srey Da Chi-Kraeng Facebook page show a hand holding a mobile phone displaying an image of Luon Sovath on its screen with audio of a man — allegedly the monk — speaking with unidentified women.

In the letter, Bunna urged authorities to examine the audio recordings, saying their content negatively impacted the honor and integrity of Buddhism, the country’s official religion.

But in his Facebook post on Wednesday, Luon Sovath denied the allegations, saying the images and recordings were manipulated to create a false narrative.

“I consider this to be a totally political matter, because the actions from the monks from the Siem Reap provincial monk council, Phnom Penh city and religious department have been done in a coordinated way and were quick like lightning,” Luon Sovath said.

The monk also admonished provincial authorities in the post for confiscating his belongings and questioning his relatives, claiming he would willingly answer authorities’ questions if they had real video evidence of any wrongdoing.

“They accused [me] of violating religious law, but when they implemented the law, they did not use the religious law and instead used authorities’ power to attack, threaten, intimidate and arrest,”  he said.

In the post, he alleged that the authorities’ true intention was to exact revenge for his activism and social work surrounding sensitive issues like land disputes, deforestation and various human rights violations.

Luon Sovath was internationally recognized for documenting authorities’ forcible eviction of villagers during a land dispute in Siem Reap’s Chi Kreng district in 2009. He was awarded the Martin Ennals Award for Human Rights Defenders in 2012 and was featured in the 2017 documentary film “A Cambodian Spring.”

The film’s director, Chris Kelly, told the Cambodia Daily in 2017 that after completing the documentary he felt as if the stories of its protagonists, including Luon Sovath, were not finished.

“Even for the monk, it’s still not over — he’s still getting death threats, he’s getting his social media accounts hacked,” Kelly said.

Am Sam Ath, spokesman for the human rights organization Licadho, told VOD on Thursday that the chief monk had the right to order an investigation into a monk accused of disobeying Buddhist principles, but he questioned why police had gotten involved in a religious inquiry.

“It is violating his rights,” Sam Ath said. “It is a religious matter, so why have [authorities] implemented the criminal procedure and checked and confiscated [his property]?”

Seng Somony, spokesman for the Cults and Religion Ministry, said the decision to defrock Sovath was not political and was instead grounded in Buddhist principles. He claimed Luon Sovath had not been targeted by the government before, and any other monk would be similarly disciplined if they violated Buddhist rules.

“Please don’t misunderstand this as a political matter,” Somony said. “It is not. It relates to Buddhist discipline.”

The spokesman said he believed the Siem Reap monk council conducted a sufficient investigation, and if Luon Sovath contested the decision, Somony said the monk should come out of hiding and defend himself.

Clarification: The article was updated to clarify that VOD has not verified whether the audio heard in the videos posted to the Srey Da Chi-Kraeng Facebook page was coming from the phone seen in the videos.