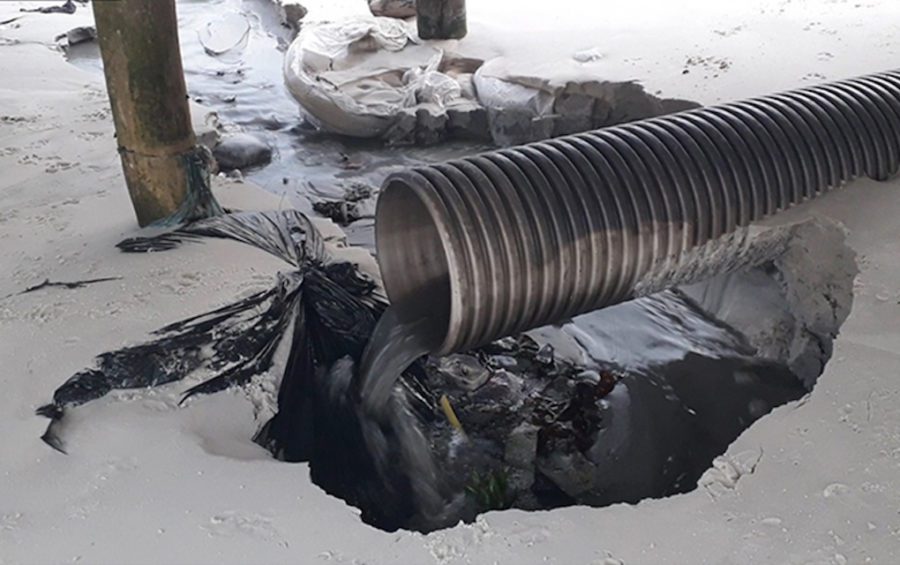 The failure of Land Minister Chea Sophara to prevent Sihanoukville resorts from spewing sewage along formerly pristine beaches — despite his proclamations of success — has sparked a call for his resignation by environmental group Mother Nature.

Mother Nature, which has repeatedly pressed the urgency of taking action in the rapidly developing coastal city, released a two-minute video on Monday once again showing dark discharges flowing out from popular tourist beaches, including O’Chheuteal, Independence and Koh Rong.

“There is still sewage draining into the sea, and more than before,” said activist Thun Ratha. “Even though hotels, casinos and other buildings don’t have water treatment systems, these buildings are being allowed to drain sewage into the sea.”

As head of the National Committee for Coastal Management and Development, Sophara had claimed success in curbing the discharges, but the situation was not in fact improved, the group claimed.

“We want to ask if he thinks he actually has the ability to solve this problem,” Ratha said.

“If he accepts that he does not, we beg him to consider resigning from his post so that someone new with more ability than him can save our famous coastline before it’s too late.”

Sophara told VOD that he refused to respond to Mother Nature’s provocation.

“There’s no need to answer to that group. That’s all,” he said.

Any further updates on the situation along the Sihanoukville coast will come from the Land Ministry, he added.

“So for any update, come and receive a document,” Sophara said.

In February, Sophara was appointed head of the national coastal management committee. Just a month later, Sophara declared all sewage problems solved in Sihanoukville, and that the beaches had returned to their natural state.

On May 21, however, the taskforce publicized a meeting to decide on further urgent action needed in the city.

Sihanoukville has been beset by mounting environmental and social concerns amid a boom in Chinese-driven gambling tourism.

Om Vanna, secretary-general of the Cambodian Youth Network, urged the government to prosecute and fine the companies responsible for draining untreated sewage into the sea.

“If there is no punishment, it will continue to be a problem,” Vanna said. “Authorities must check the law and punish [them] according to the law — not just hold discussions … or find some benefit for their own pockets.”