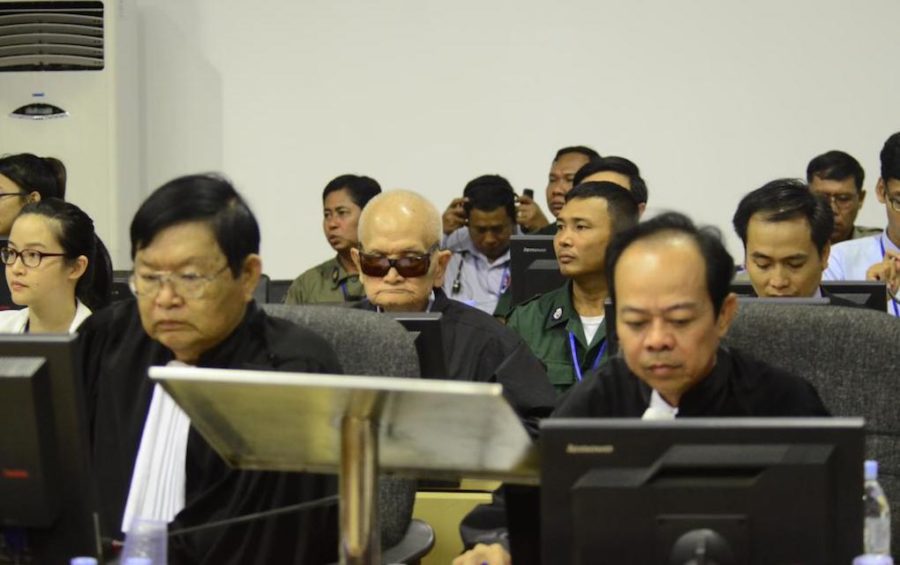 Noun Chea (with sunglasses) and members of his defense team, including Doreen Chen (far left), Son Arun (front left) and Suon Visal (front right) in the courtroom for a trial hearing on January 8, 2015. (ECCC)

Legal experts and the Khmer Rouge tribunal spokesman on Sunday said the law requires Khmer Rouge regime second-in-command Nuon Chea’s appeal of his genocide conviction to end following his death last week, calling into question whether the 2018 charges will stand.

But Chea’s defense attorneys, who were fired by the tribunal on Friday, suggested the appeal process should continue and called their termination while the appeal was pending “improper” and “premature.”

Liv Sovanna, co-national counsel for Chea, said the decision by tribunal administrative officials to terminate the nine-person defense team on Friday was “an improper interference with judicial power which violates the constitutional separation of powers.”

“It also undermines the fundamental right of the client to legal representation until their case concludes,” Sovanna said in a statement shared with VOD on Saturday.

Chea, who was convicted in November 2018 for genocide against ethnic Vietnamese and other crimes alongside regime head of state Khieu Samphan, died on August 4 after spending months in hospital in Phnom Penh.

The tribunal’s trial chamber also found Chea guilty of genocide against the ethnic Cham Muslim minority. He was the only senior Khmer Rouge leader to be convicted for the crime against the Cham people, and one of just two convicted of genocide in Cambodia.

Chea’s attorneys began appeal proceedings against the charges in July, which were pending at the time of his death. In 2014, Chea and Samphan were also sentenced to life imprisonment in a separate case for crimes against humanity.

Doreen Chen, Chea’s international counsel, said the timing of the administrative decision to terminate the defense team — on Friday while they were en route to Chea’s funeral in Pailin province — was “baffling, premature, and disruptive.”

Chen told VOD on Saturday that whether Chea’s appeal proceeds should be a “judicial question, which we have already put to the ECCC’s Supreme Court Chamber but which they have yet to decide on,” using the formal name of the tribunal, the Extraordinary Chambers in the Courts of Cambodia.

Their terminations were issued by the tribunal’s Defence Support Section and Human Resources department, “owing to the death of the client,” Chen said.

“Our team’s contracts were all cut short, and the tribunal has advised the lawyers that we are no longer going to be paid after the end of the month, effectively terminating us as well,” she added.

Tribunal spokesman Neth Pheaktra said on Sunday that after Chea’s death the defense team filed a request to the Supreme Court Chamber seeking clarification on how his death would affect appeal proceedings.

Under the law, when an accused person dies, criminal action against them is terminated, Pheaktra told VOD.

“We expect the Supreme Court Chamber will deliver its decision on this issue in appropriate time,” he said in a message.

“The death of Chea means Khieu Samphan is the last remaining top Khmer Rouge leader left in the dock in Case 002/02,” he added.

Late on the day Nuon Chea died, Chea Leang, a national co-prosecutor at the tribunal, said criminal proceedings against the former deputy communist party secretary, who was known as “Brother Number Two,” would come to an end, but Samphan’s appeal process would continue.

Cambodian Bar Association president Suon Visal said that because Chea died while an appeal was underway, legal proceedings have to stop and he cannot be found definitively guilty of genocide.

“Legally, when the accused dies, the case finishes,” said Visal, who had previously served as a legal consultant and defense lawyer for Chea.

“We can say he’s not guilty. He’s innocent. Because the case [and appeal process] is not final. Based on the principle of the presumption of innocence, so he’s not guilty,” he said.

Sok Sam Oeun, chief attorney at AMRIN Law and Consultants Group, agreed that under Cambodian law, under which the tribunal operates, if an accused person dies while an appeal is pending, those proceedings should end and the accused would be presumed acquitted.

Chen, Chea’s attorney, similarly told VOD last week that under the law, while the appeal was pending, Chea was arguably presumed innocent of the genocide charges and the November Trial Chamber decision was vacated.

However, Chen argued that “in the interests of justice, the tribunal could still allow his appeal to go forward post-mortem.”

“This would enable the truth to be finally established,” she said.

Sam Oeun disagreed, explaining that he did not support the defense’s idea of continuing the appeal process after Chea’s death.

“Convict, what for? Convict a dead person?” he asked, adding that it would be a waste of time and money.

“The court is not a truth committee,” he said.

The truth was established earlier in the legal proceedings during the investigating and debate period, Sam Oeun said.

The tribunal should announce that Chea’s appeal has been terminated due to his death, and that the case was finished, he said.

“Justice for this case, it is not sending this old man to jail only,” said the 65-year-old attorney, whose father, a Kompong Cham City military commander under the Lon Nol regime, was killed by the Khmer Rouge alongside a dozen other Lon Nol commanders.

“I feel I received justice when [Chea] was sent to trial,” he said.