After Land-Protest Shootings, Victim Told He Will Never Walk Again, Another Falls in Debt 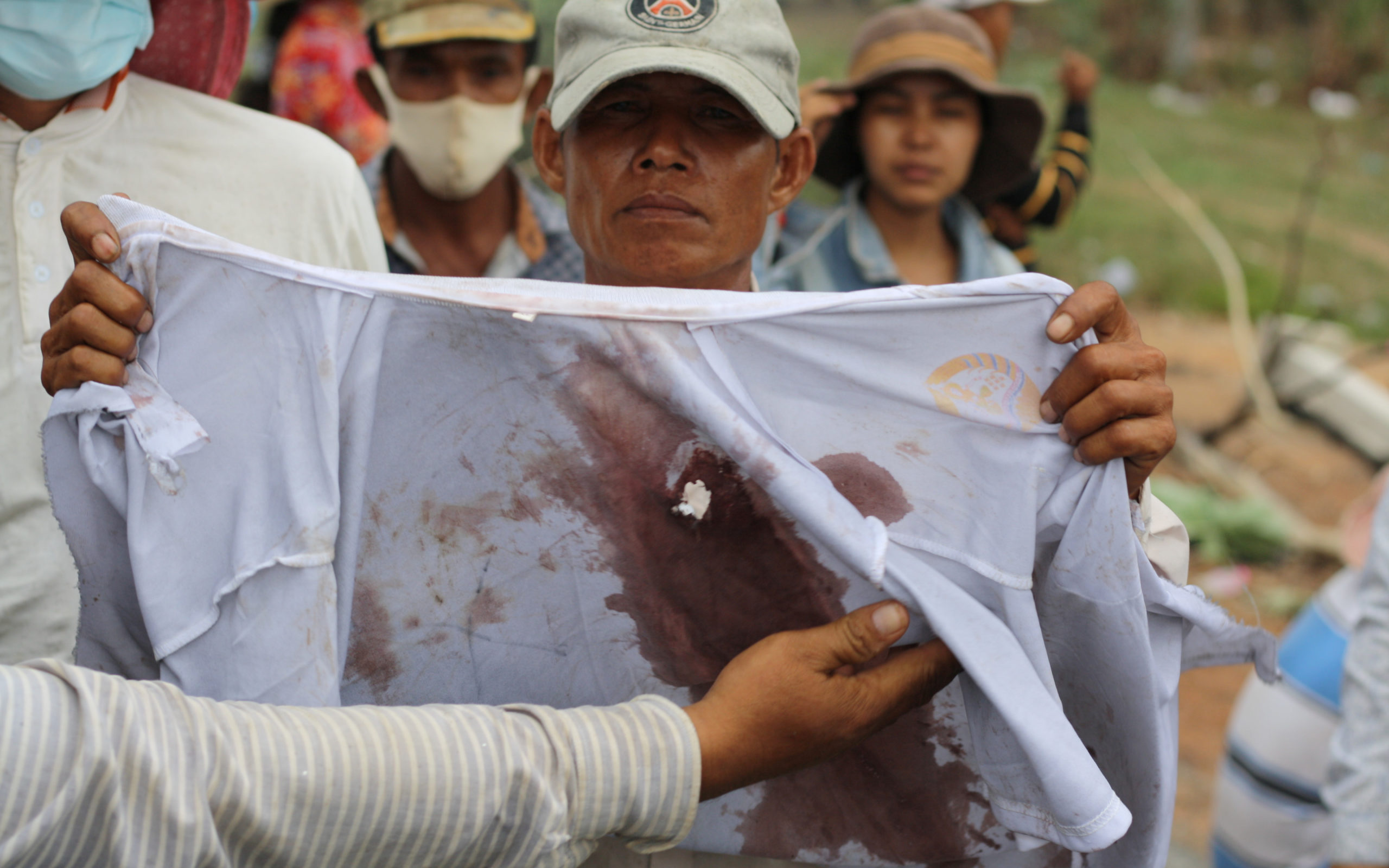 A protester holds up the bloodied shirt of Mom Chantha, who was shot by soldiers amid a land dispute, in Kandal province’s Ang Snuol district on June 3, 2021. (Michael Dickison/VOD)

Pov Saroath has said he was only a spectator, a construction worker who came across a clash between hundreds of officers and local residents over a land dispute in Preah Sihanouk province’s Prey Nob district.

He was on his lunch break, and stayed to watch as the situation escalated.

Protestors burned tires and hurled petrol bombs, and officers fired 20 warning shots into the air, according to a report issued by provincial authorities of the January 2019 incident.

One of the bullets that were shot in the air struck Saroath in the spine. He was rushed to Phnom Penh, and hospitalized for a month.

Five months later, receiving treatment at the Battambang Spinal Cord Rehabilitation Center, Saroath said doctors had given him another six months to find out whether he would walk again.

His sister, Pov Sochea, told VOD last month that doctors had now told Saroath he would never regain use of his legs.

The 31-year-old received the news last year, and now never wants to go out, his sister said. When the weather is hot, his wound sticks to the bed and keeps him up. When it’s cooler, the pain gets worse.

“When we suggest he go outside, he turns us down because he feels shy with everyone,” Sochea said.

The Preah Sihanouk provincial government helped the family with $2,000 shortly after the incident, but the family was now largely on its own to cover medical expenses, with some help from rights group Licadho.

Saroath lives with his mother and two young nephews in Battambang province, Sochea said. He can’t work, and faces struggles with their livelihoods day-to-day, she said.

In Kandal’s Ang Snuol district, Mom Chantha said he had chronic pain and trouble sleeping at night from his own bullet wound. He could now barely move his left hand, he said.

Soldiers shot Chantha in the shoulder last June as they confronted a group of land protesters. The protesters said they had been farming the area for decades, but the Defense Ministry had recently claimed the land, which was classified as state-owned. On the day of the shooting, the protesters attempted to block a bulldozer from moving onto their farmland.

Chantha, who was one of the protesters, said the ongoing pain caused him fitful sleep, but what really concerned him was mounting debt.

He could no longer work in construction sites due to the injury, and depended on his wife’s garment factory income as well as two cows, he said.

The family had already borrowed more than $1,000 for medical expenses, Chantha said. He would not borrow any more because his family would not be able to repay it, he said. The province had provided some money, he added.

Ang Sre Po village chief Non Song said he believed the medical care provided by the state was already sufficient. He added that it was hard to say who was wrong or right in last year’s shooting, as Chantha had been holding a stick as he confronted the armed soldiers.

Defense Ministry spokesperson Chhum Socheat said he needed to review the case, but could not be reached again.

For Chantha, however, the military should be taking responsibility for the shooting. “It is still unfair because I have not yet seen the military pay compensation,” he said.