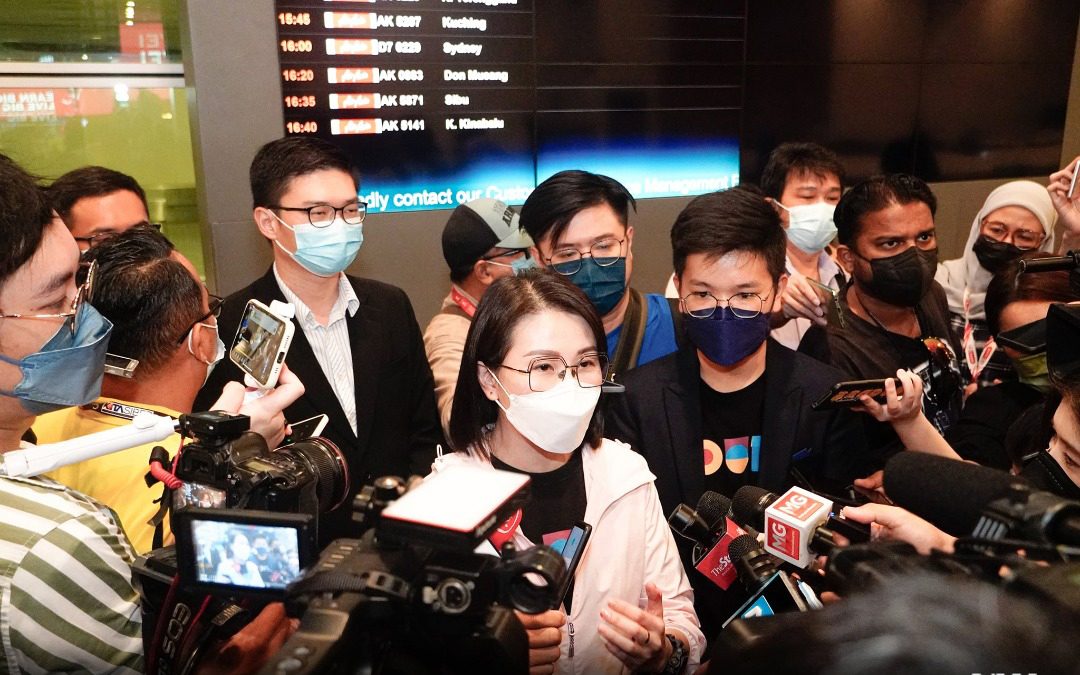 Nicole Wong, chairperson of the political party Malaysian Chinese Association, answers questions at a press conference on April 12, 2022 about citizens trafficked to scam compounds and online gambling in Cambodia. (Supplied by Nicole Wong)

A leader in a Malaysian political party estimated there are more than 300 of her country’s citizens still trapped inside online scam operations in Cambodia, as recently rescued Malaysian nationals began returning home.

One victim spoke to VOD of the changing business models within the slave compounds after he had recently escaped from Sihanoukville: One operation had been expanding into English-language scams during his time there, while another pursued cryptocurrency-based gambling using bought, sold and entrapped workers, he alleged.

Nicole Wong, chair of the youth division of the Malaysian Chinese Association, told VOD this week that her party has been responding to help requests since January, largely from family members who say their children are stuck in Cambodia.

“One victim, who secretly contacted MCA, also revealed that about 50 people were being locked up in a building by the syndicate, and we were told that there were more similar buildings in that area, so we expected more were stranded there,” she said.

Earlier this month, 16 Malaysian citizens were rescued by Cambodian authorities working with Malaysian authorities and international police, after Malaysia’s foreign minister and MCA raised concern about people being trafficked to work in Cambodia.

Wong explained that the process started by sending information to the Malaysian government’s Council for Anti-Trafficking in Persons and Anti-Smuggling of Migrants (MAPO), which then passed information to Interpol and regional counterpart Aseanapol.

“Even though the Cambodian government found that they were carrying out illegal activities in Cambodia, legal action has been set aside for now,” she said.

Wong said the party was continuing to try to assist those who contacted MCA for help, saying they had received more than 100 requests so far. Their first request for help was received by MCA Youth’s division in Tanjung Piai, in Johor state, with a resident alleging his sister-in-law was stuck in Cambodia.

The claims by this complainant, described by Wong, matched similar accounts from other victims who allege detention, torture and extortion in scam operations across Cambodia.

“According to him, she was forced to work overtime and would get beaten if she raised any objections. We were also told that the victims were operating online casinos under a high-pressure environment and were not allowed to freely leave their working space. Each of the victims were forced to meet the KPI [key performance indicator], as failure to achieve sales target would result in physical abuse.”

Malaysians have also been trafficked for jobs in Myanmar and Thailand, according to reports received by MCA, but Wong said this wasn’t a new trend.

“But from the news report, cases similar to these started as early as 2019, Sarawak Police have identified the local suspect(s) in the job scam that led to the detention of 47 Malaysians in a Cambodian prison,” she said.

Wong identified several similar trends between the 2019 cases and the reports they’re hearing: Facebook and WeChat job ads promising salaries of over $1,000 per month, guards confiscating personal phones and passports on arrival, and professionalized training on how to scam individuals online.

Wong said her party is urging the government and Asean to develop a response plan to human trafficking, including strengthening resources for rescue and support, and coordinating law enforcement to hold human traffickers accountable.

“Due to financial factors, the more vulnerable and underprivileged members of our society are more likely to fall prey to human trafficking, and the number of cases has also increased drastically during the pandemic.”

Inside a Scam Operation

One recently rescued Malaysian national said his first priority upon leaving Sihanoukville was to help his family, but he also wanted to raise this issue “to the world.”

Gary* spent his last day in Phnom Penh this month at the Thai Embassy, trying to help his girlfriend, a Thai national, negotiate escape from a scam operation in Sihanoukville. Speaking to a reporter under a pseudonym to protect his trapped partner, Gary claimed that the two had been lured from Thailand to Cambodia with job ads.

The couple originally started working in Cambodia by responding to jobs for customer service and translation, but when they arrived in Sihanoukville, Gary said he realized they were brought into an operation defrauding people by luring them into relationships and then pushing them into a fake investment platform.

Because he spoke English, Gary said he was told by leaders to study the scam because the operation, which was scamming people in multiple Asian languages, wanted to begin defrauding English speakers. They hadn’t yet recruited English-speaking supervisors while Gary was there, so he claimed he hadn’t earned money from the scam.

Supervisors would start their day with an hour of training and strategy, Gary said, and everyone had to report their chat history to supervisors around 10:30 p.m., aiming to talk to between 15 and 20 people and start online relationships: “We ha[d] a book, so [you write that] today you find this kind of victim and you record the name and the date … everyday we would record this.”

Gary said he began trying to contact police through Facebook messages and calls, and had sent the location of the compound he was stuck inside and a copy of his passport. Then in late February, one of his bosses of the operation showed him his own chat history with police on a different phone.

According to Gary’s claims, the human resources manager of the Sihanoukville operation told him that they had discovered he was reaching out to police and they paid $5,000 to police so that they wouldn’t intervene.

“The first company [human resource manager] said he can’t let me stay there again, so the boss at the first company said you will be sold to another company for $11,000,” Gary said, alleging that $5,000 was a bribe and another $6,000 was his sale price to the other operation. The human resource manager then told him: “So if you want to leave, you have to pay $6,000 to the second boss.”

When asked if he had heard of officers taking bribes to ignore a case of human trafficking, Preah Sihanouk provincial police chief Chuon Narin said that he hadn’t heard of any cases and believed it was a fabricated story.

“There are hundreds of cases that they, the foreigners, wanted to change their work from one place to another, so they created a scenario that there is trafficking, kidnapping,” he said.

He said that he will “take action very strictly” if his department was presented with substantial evidence of trafficking. He cited the “blood slave” cases, in which one Chinese man and one Thai woman had separately claimed that their blood was harvested by scam operators, only to retract their stories later.

“The fake stuff is getting exposed, however the real thing is not exposed as widely as the fake ones,” he said.

He described this new operation as a standard online gambling platform using cryptocurrency to take bets. He acted as a promoter for the site, and he wasn’t sure if people could truly collect earnings on the platform: “I think it’s the gambling problem: you have wins, you have losses, but mostly it was losses.”

Gary said he decided to contact authorities pretty quickly, searching for help on social media. He eventually filed a request to the Malaysian Embassy and was rescued after three or four weeks.

The boss of the online gambling operation handed Gary his passport and all his possessions when police came to facilitate the rescue, he said.

“At the second company, it was very good actually, but because of the human trafficking, because they sold me for $11,000 I couldn’t accept it, so I asked for the [Malaysian] embassy, I asked for the police.”

*Name has been altered.

CORRECTION 4:20 p.m.: MCA Tanjung Piai received a request from a constituent who alleged his sister-in-law was in Cambodia, without specifying a city.