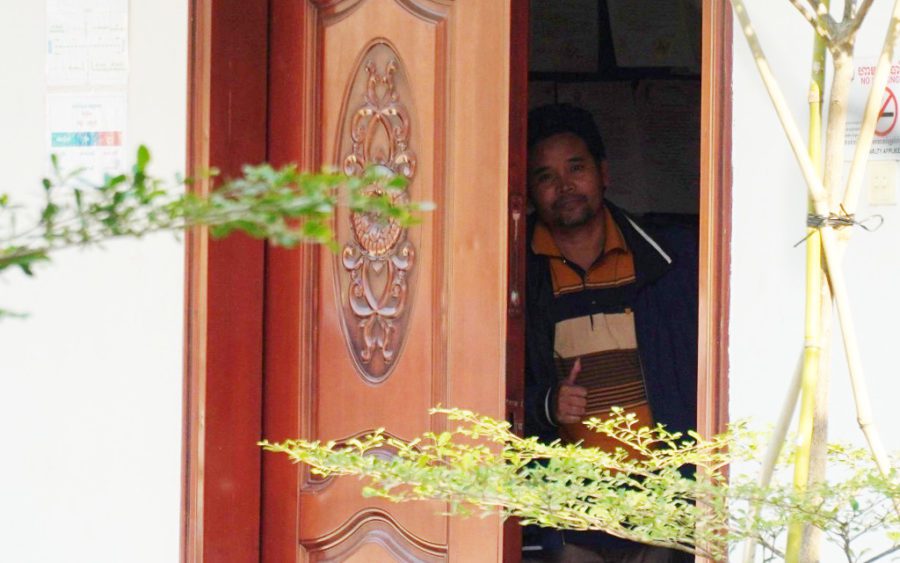 An award-winning environmentalist detained over the weekend said upon his release that he had seen about 100 tractors carting wood away from the Prey Lang Wildlife Sanctuary — a claim rejected by local environment authorities and a nearby reforestation project as lacking in evidence.

Leng and four other activists were arrested on Friday in the protected forest, with a local villager saying he was with the group to put up banners saying “Please help preserve our forests.” The villager also said the group’s equipment was confiscated.

The five were questioned over the weekend before being released on Monday after signing two agreements.

Leng said after his release that he had thumb-printed a contract agreeing to stop his activities without first informing authorities. The Kratie provincial environment department required that he ask permission before entering the protected forest, and forbid him from disseminating information without permission, he said.

“The arrest was to shut our mouths and to hide the evidence and information that I had taken in the Prey Lang Wildlife Sanctuary area. This was the primary motivation behind the arrest, and they seized all the evidence to keep it away from public dissemination,” Leng said.

He criticized the targeting of forestry activists as if they were the criminals rather than illegal timber traffickers.

From Wednesday to Friday last week, he had monitored the transport of timber from within Prey Lang, and had seen 100 tractors in convoys taking wood from near Komphluk village in Sambor district’s Kampong Cham commune, he said.

Kratie environmental department director Chhay Doung Savuth said it was information made up by Leng’s group.

“You can come and go and see together with me. I won’t answer anything. If you are free, come to meet me,” Doung Savuth said.

In the district, just outside the Prey Lang boundary, is Think Biotech, formerly a South Korean subsidiary’s reforestation project, which controversially cut down forest to plant acacia trees. Now Taiwanese-owned, the company said on Tuesday that Leng’s claim — that the Prey Lang wood could have been headed toward the company — was unfounded.

“It’s just what people said. It’s not true. You don’t just hear people saying something and then bring their words to question us. It isn’t right,” said chairman Lu Chu Chang.

Wood was not going into Think Biotech but coming out, he said.

Think Biotech plans to clear 8,000 hectares on its 34,000-hectare concession this year to plant new trees, in addition to 2,000 hectares it cleared last year, Lu said.

“As a fact, the timber transported out of our company [land] has been collected from our land concession. If there is anyone taking timber from Prey Lang and taking it into our territory, [forestry activists] can call the authorities to arrest them,” he said. “You have to catch them and find out where they’re taking it to and who they’re selling to.”

The company has 150 bulldozers and more than 1,000 workers for the task, he said. It’s a huge tract of land, and the old logs need to be trucked out every day, he said.

Last week, a member of the Prey Lang Community Network, a forestry protection group that has been banned by authorities from patrolling the forest, said the transport of timber in the area was currently frenzied.

“I want to say that it’s worse than anarchy, all day and night,” said the activist from the under-pressure group, who declined to be named for fear of repercussions. “My house is next to the road and I can’t sleep well.”