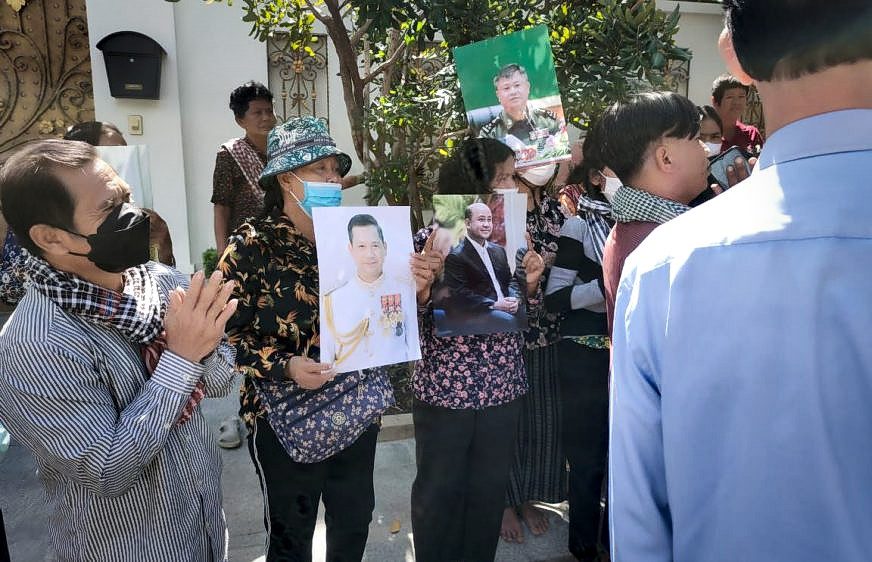 Residents affected by a new airport development in Kandal province shifted their advocacy focus to the prime minister’s son, Hun Manet, and petitioned him to intervene in the dispute.

Around 100 residents from Boeng Khyang and Prek Leng villages in Kandal’s Kandal Stung district and Takeo’s Putsar village went to Hun Manet’s home in Phnom Penh on Saturday to deliver a petition asking for a resolution to their dispute with the airport development project.

The new airport, called the Techo Takhmao International Airport, is being constructed on the border of Kandal and Takeo provinces, and is set to serve Phnom Penh. The development has also coincided with a slew of nearby state land transfers to businesspeople.

The residents were seen outside Manet’s home on Saturday holding photos of him and his brothers, Hun Manith and Hun Many. Manith heads a military intelligence unit and Many is a lawmaker in the National Assembly.

Im Dara, a representative for the people, said they had been struggling with the dispute for four years but all levels of government had been unable to help them.

“We took the petition to the house of His Excellency Hun Manet, which is our last option to ask him for help because we have submitted petitions to the National Assembly, the Senate, the Ministry of Land Management and the governor of Kandal province, but there is no solution,” Dara said.

He added that village residents were being offered only $8 per square meter in compensation for land they valued at $50 to $100.

Residents have complained that the development company OCIC, with the assistance of local authorities, has taken their land for the airport project and offered land rates below what was offered on the market. They have also accused local authorities and police of threats and violence as they have protested against land loss.