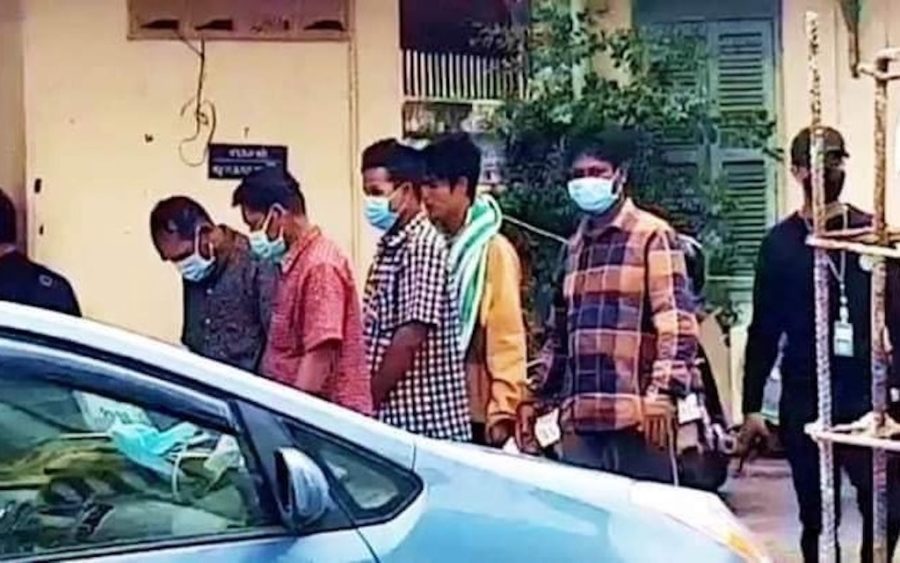 Some of the Kandal villagers photographed at the provincial police headquarters earlier this week. (Supplied)

Nay Khorn, 50, says he is on the run after his wife, Khem Cheatra, was charged and jailed in a dispute with Phnom Penh’s new international airport development.

Two of Khorn’s sisters were also arrested at the same time — at a protest that turned violent on Sunday — though they were released late Tuesday.

“I have seen the words ‘incitement to commit felony’ … and when I heard those words I felt suffering. What is the felony since they’ve already completely bulldozed [our land] and there is no compensation yet and we just protected our land. It is very painful and unjust,” Khorn said.

His wife, Cheatra, is one of nine airport protesters charged and sent to prison in the aftermath of Sunday’s protest.

“They keep moving their barrier every day, and it is getting closer and closer to the villagers’ houses. … I do not know the right words to describe it, since they took our land, and meanwhile the land’s owners have been imprisoned, charged with serious crimes. … Where can we find justice for the weak? We come to protect our land, and we face such charges,” Khorn said.

Plans to build a new international airport for Phnom Penh in Kandal province have been in the works for years, but tensions have escalated this year as developers moved to clear rice fields to make way for construction. Villagers say they want fair compensation at market prices, rejecting the $8 per square meter deal on offer. Provincial authorities have said they are also offering land swaps for farmers in the disputed area.

Khorn said he didn’t believe his wife could have caused injury through throwing rocks.

“I beg the court to reconsider about them because they are women who lost their land, and now they are separated from their children,” he said. “I do not dare to stay at home since the authorities continue to search for us … and now our village is very quiet.”

He added that authorities could simply offer a better price, though there was a loss of trust when it came to a land swap.

“In the future, we will be kicked out the same, so people do not accept the exchange of land,” he said. “Injustice for poor people has existed like this since long ago, and it will be like this forever. … Farmers only know how to place the paddy.”

Yi Soksan, a senior official at rights group Adhoc, said the NGO would provide a lawyer for the accused if requested.

“We have monitored the case. … We have observed that in this case, both the authorities and company should not have arrested people and imprisoned them because it is their land and they have not encroached on anyone,” Soksan said.

“Authorities are supposed to serve the people, not serve a company,” he continued, urging authorities to study market prices before offering compensation. “When authorities and a company that has big connections want something, they love to use force. … If it was the people who had gone to bulldoze the company’s land, they would have been arrested long ago.”