Airport Protesters Say They Were Stood Up by District Governor 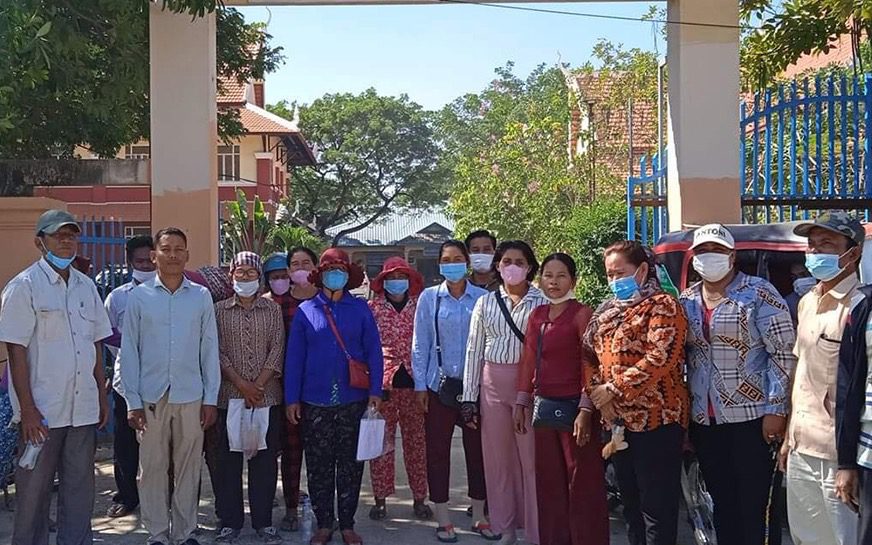 Families from Kandal’s Kandal Stung pose in front of the district hall on December 12, 2021. (Supplied)

Families protesting a land dispute with Phnom Penh’s new airport development arrived at the district hall for a scheduled meeting on Monday only to be told the district governor was busy, they said.

Around 200 residents protested in Kandal province’s Kandal Stung district last week over the airport’s construction, and said they suspended the protest after being promised a meeting at the district hall on Monday.

A village representative, Phok Phanny, said on Monday that 26 community representatives went to the district hall during the morning but were unable to meet governor Ouch Savoeun, as representatives told them he was busy with meetings outside the hall.

“[We] all are frustrated because if he could not come to meet us, he should have informed us so that we did not have to come to the district to meet him, wasting time, losing work, losing money, waiting for him one morning for nothing. We cannot wait until next week. If there is no solution, we will protest again,” Phanny said.

The families are from Ampov Prey commune, and embroiled in a longstanding conflict originally with a local tycoon before the disputed land became part of the Overseas Cambodia Investment Corporation’s airport project.

The airport project has also faced violent protests in Boeng Khyang commune, where around 30 residents were detained by authorities earlier this year amid escalating tensions.

Savoeun, the district governor, could not be reached for comment. The Ampov Prey families said the meeting was being rescheduled to the weekend.

Officials “must not remain silent without explaining the reasons or present clear evidence, so that their people can understand or calm down,” Sophat said. “The authorities must come out and give clear explanations to citizens.”

The Ampov Prey families say about 83 hectares is being contested, and they are willing to take $8 per square meter as compensation.

The rate is what authorities have offered Boeng Khyang families who dispute the price, saying market prices are 10 times higher.