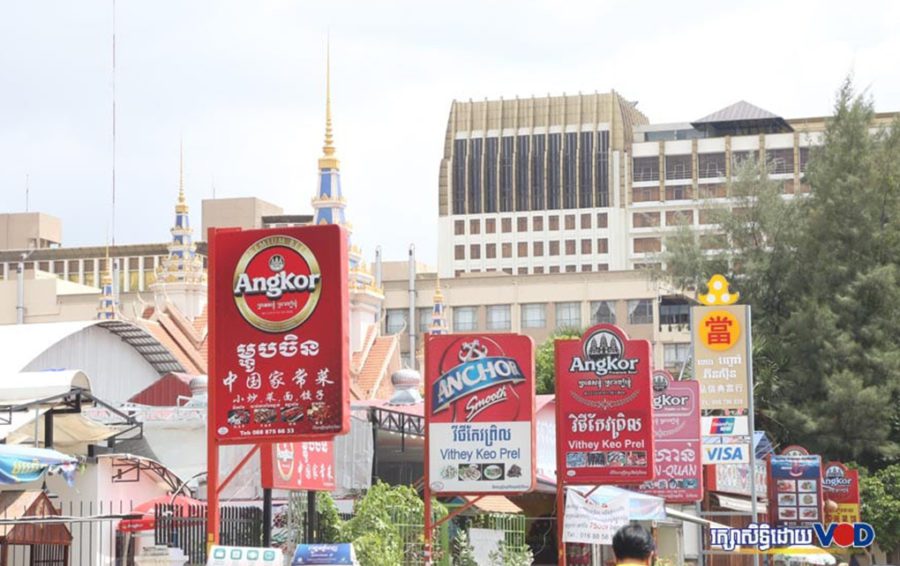 Advertising banner along the way. (VOD)

The Information Ministry ordered a ban on alcohol advertising on Visak Bochea and Meak Bochea, two Buddhist holy days this year falling in February and May.

In a letter dated April 30, Information Minister Khieu Kanharith said the move was intended to promote Buddhism as the state religion.

Pos Sovann, general director of the ministry’s broadcasting department, said there had been public complaints, and comments on social media, about showing greater respect on the two days.

Visak Bochea is associated with the Buddha’s birth, and Meak Bochea with the day he predicted his own death.

“Those days are holy days for everyone, so we don’t want the media to broadcast [alcohol ads],” Sovann said. “But we cannot place a ban on drinking. That would be difficult to declare.”

Khim Sorn, the chief monk of Phnom Penh, welcomed the Information Ministry’s ban on alcohol advertising on the two days.

But the ban should extend to all holy days — about four days every month — and the advertising replaced by broadcasts of Buddhist doctrine, Sorn said.

Alcoholic beverages also should not be on display at stores, following the example of some other Buddhist countries, he said.

“They sell carefully, because it is important for the nation to want all children to be good. They want to make them become good people from the time they are children,” he said.

In Thailand, the sale of alcohol is banned for 24 hours on Visak Bochea (Visakha Bucha).

In its letter, the Information Ministry also asked the Ministry of Industry and Handicrafts to put warning labels on the cans and bottles of alcoholic beverages to caution imbibers that “if you drink, don’t drive.”

Yong Kim Eng, president of People’s Centre for Development and Peace, pointed out that regardless of the proposals, comprehensive alcohol advertising legislation was still unavailable in Cambodia.

“There needs to be a law to control advertising,” Kim Eng said, adding that such regulations should be written out of concern for public health and limiting social harm.

A draft alcohol control law was submitted to the Council of Ministers and Health Ministry in 2015, potentially regulating advertising and the minimum drinking age, but its progress has since stalled.