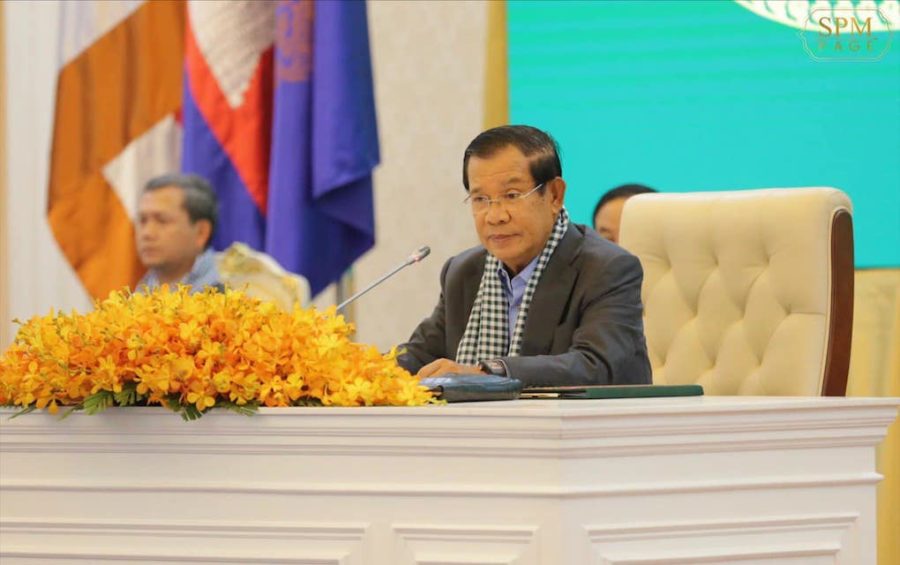 Prime Minister Hun Sen speaks at the Peace Palace in Phnom Penh on March 25, 2020, in this photograph posted to his Facebook page.

Amid the global Covid-19 outbreak, Prime Minister Hun Sen on Wednesday said the government was considering declaring a state of emergency, raising concerns among some about potential civil rights restrictions.

Speaking to an audience of volunteer health workers in Phnom Penh, Hun Sen said he would need to invoke Article 22 of the Constitution to ask the king to declare a state of emergency, which also requires approval from the presidents of the ruling-party-led National Assembly and Senate.

But Hun Sen objected to the constitutional stipulations, saying he should be able to declare a national emergency without a consensus agreement.

Whenever governments declare a state of emergency, civil rights are restricted, the prime minister said, adding that political observers should not accuse him of cracking down on citizens.

“You have to understand that other countries can prevent people from leaving home [in a state of emergency], so why can’t I do the same?” Hun Sen said. “Whatever you do, I don’t know, but I have the right to protect people from dying.”

Covid-19 has spread to some 200 countries and territories, infecting more than 438,000 people, with some 112,000 recovered, and has been linked to nearly 20,000 deaths, according to data from the U.S., E.U., China and World Health Organization (WHO) compiled by Johns Hopkins University.

Several nations currently have stay-at-home orders imposed, restricting citizens’ movement in an effort to limit the spread of the virus.

In Cambodia, as the number of confirmed cases in the country steadily climbed in the last two weeks, the government has ordered the temporary closure of schools and entertainment venues, and banned concerts and religious gatherings, while adding beer gardens to the list of shuttered venues on Wednesday. Travel in and out of the country has also been restricted.

Authorities have arrested at least 17 people throughout the country since the outbreak began in relation to social media posts about Covid-19 and its spread in Cambodia, which authorities have deemed “fake news,” or false information.

*Note: The Health Ministry has reported 10 recoveries as of March 25, 2020. The graph will be updated when additional information about these cases is confirmed.

Hun Sen said on Wednesday that the government doesn’t plan to close markets, restaurants, coffee shops or factories, and Khmer New Year — one of the nation’s peak travel periods during which time citizens head to home provinces to visit their families — can continue with caution.

Overseas Cambodian students will not be repatriated, he said, as their return would increase the risk of infections inside the country.

However, the Foreign Affairs Ministry said in a statement on Tuesday that 12 Cambodian students would return to Cambodia from the U.S. beginning on Wednesday.

Hun Sen appealed to the health volunteers to increase educational messaging about preventing the spread of Covid-19 and ensure messages reach Cambodians throughout the country, especially in rural or underserved areas.

Cell phone companies have added a health message about Covid-19 to dial tones, asking phone users to call the Health Ministry’s 115 hotline if they display symptoms. Local authorities have started driving through neighborhoods playing messages about the illness through bullhorns.

The premier urged people not to go out unless it was necessary, and asked the public to encourage those who might have had direct contact with an infected person to get a health checkup.

He also promised to provide free health care for anyone who tests positive for the respiratory illness in Cambodia.

Asked about the possibility of a state of emergency declaration, Health Ministry spokesman Ly Sovann said there are no signs the country is headed in this direction, but the country should be prepared.

“Most of the cases were brought in from outside, and there is no sign of transmission between people in their [local] communities,” Sovann said.

If widespread transmission occurs, he said the country would have to cut off gatherings and minimize interactions in public places, where the virus is most likely to spread.

When asked whether the Health Ministry supports declaring a state of emergency, Sovann would not comment, saying it is “up to the leaders.”

Political analyst Meas Nee said declaring a state of emergency would be a necessary step if the virus continued to spread and the number of cases in Cambodia jumped. However, he said the government must also step in to assist poor people who may be unable to work if a stay-at-home order was declared.

“For rich people, just one month [of an emergency state] is okay, but for the poor, if we do not allow them to do business, they will starve. This is the important thing that the government has to think about,” Nee said.

He suggested that the government plan the length of a national emergency period before declaring it, and ensure the state can assess and control the impacts on people with low incomes.

In Takeo province’s Daun Keo City on Tuesday, market vendor Pen Sokunthea said that while wealthier sellers have chosen to stay home amid the outbreak and subsequently declining sales, she has continued to sell clothes, belts, and fruit in order to make ends meet.

“The rich people, they have money and they can have food stocks,” 51-year-old Sokunthea told VOD. “For me, as a poor person, I just sell one day to eat one day.”

Nee also said that the government had been careless in its initial approach to combating the spread of the virus, noting that border inspections have been less than effective.

The analyst expressed concerns that the government could use the emergency environment to clamp down on activists and opposition figures.

“Don’t use this case as an excuse to arrest those who oppose [the government],” he said. “It takes commitment from both sides. First, people have to participate in this emergency campaign and second, the government has to show its commitment by giving justice to all people and not taking this as an opportunity to crackdown on people.”

National Police spokesman Chhay Kim Khoeun said if an emergency declaration is implemented, people should stay inside their houses for two weeks, which should not be difficult if the purpose is to avoid death.

Restricted movement could help authorities control the situation and prevent a more dire climate, like that in Italy and other nations, Kim Khoeun said. Police would be ready to enforce stay-at-home orders if given, he added.

“If we don’t survive, where can we find civil rights?” Kim Khoeun said. “Applying this [restriction] does not mistreat people, but instead we’re protecting people.” 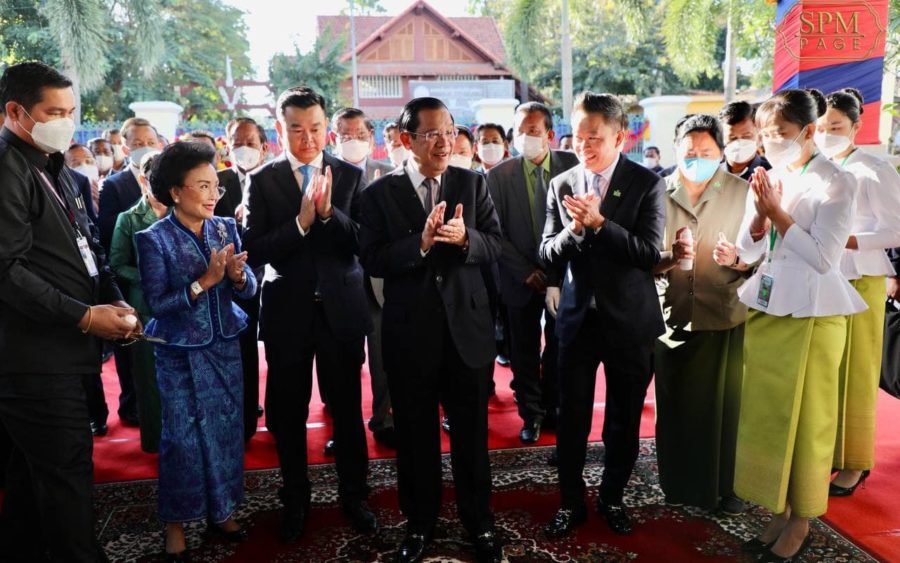