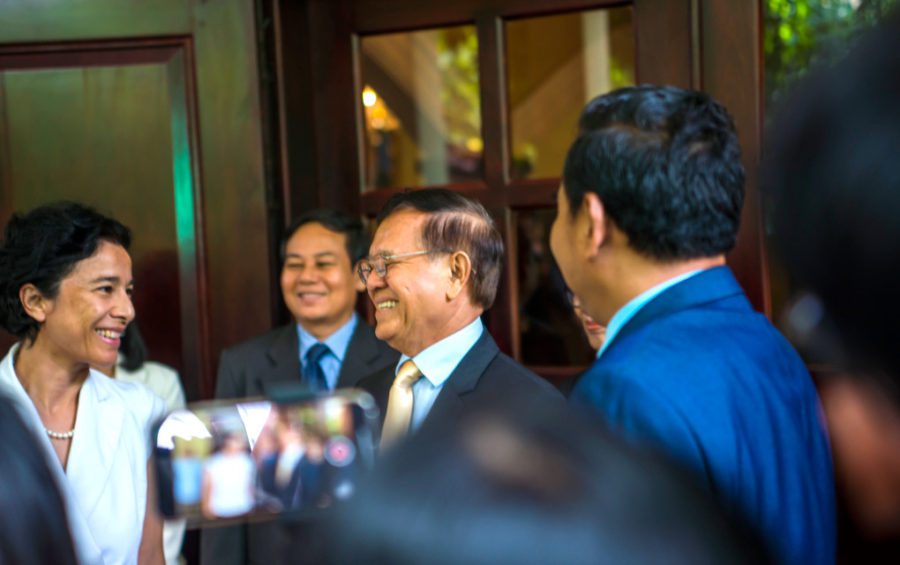 Prime Minister Hun Sen last week ordered the Justice Ministry to release on bail more than 70 people who were jailed for supporting the promised homecoming of Sam Rainsy.

But the easing of political pressure has failed to convince the E.U. so far. Demanding “real and credible” change if Cambodia wants to keep duty-free trade with the bloc, it noted that Sokha’s release could only be considered the “first step in the right direction.”

The E.U. submitted its report on suspending the “Everything But Arms” deal to the Cambodian government on November 12, giving it one month to respond. The E.U. seeks the restoration of Cambodia’s political opposition as well as a range of labor reforms.

Last week’s actions could be a harbinger for further reforms to come. But several commentators were incredulous that Hun Sen would go so far as to restore the outlawed CNRP — or that supposedly independent courts could even act quickly enough — to appease Cambodia’s biggest export partner.

Sokha was arrested in September 2017, mere months after his CNRP pushed the ruling CPP in local-level elections, winning 44 percent of the vote. Pressure on civil society, independent media and the CNRP swelled in the wake of the elections, and Sokha was arrested in a midnight raid on his house on September 3 for allegedly working with the U.S. to overthrow the government.

Two months later, the Supreme Court dissolved the CNRP. Eight months after that, the ruling party swept all 125 seats in the National Assembly in a national election.

Rainsy, the long-time opposition leader living abroad since 2015 to evade prosecution, had announced that he would risk his life to return to Cambodia on November 9. Supporters in Thailand were prepared to face the armed forces and walk across the border with him. The government called the plan a coup attempt.

But Rainsy flew to Kuala Lumpur instead and returned to his home in France a week later.

“In my opinion, the prime minister wants Mr. Sam Rainsy to stay off the political stage forever,” Srey Sros said, explaining that the recent moves amounted to building up Sokha in favor of Rainsy.

The two politicians formed the CNRP in 2012 as a merger between Sokha’s Human Rights Party and the Sam Rainsy Party. Hun Sen has long angled to break the alliance.

Dissolving the CNRP in 2017 was a huge step and a gamble, Srey Sros said, requiring the government to push its case that there was a broad web of conspiracy and illegality in order to defend the Supreme Court as independent and its actions as merely following the law.

Now, within a month, the same legal institutions would potentially have to untie all those knots, she said.

“We ask whether in a month we can reply in time to the E.U.,” Srey Sros said.

And the E.U.’s demands were significant, noted another political analyst, Em Sovannara.

“We would have to open space for real freedom,” Sovannara said.

Releasing the CNRP supporters on bail — or Sokha, with his treason case still hanging over him — was hardly enough, he said.

They had been “released with a gun pointed at them,” Sovannara said. “That is not appropriate.”

Kim Sok, a government critic who was jailed in 2017 and now lives in Finland, said the government was unlikely to go much further. Restoring the CNRP would be too serious a threat to the ruling CPP’s hold on power, he said.

“The EBA will clearly be suspended because Mr. Hun Sen will not hand over everything within a month, even two months or three months,” Sok said. “Mr. Hun Sen wouldn’t dare take that risk. It could make him lose power.”

Political analyst Meas Nee added that if the international community wanted to see reconciliation between Hun Sen and Rainsy, they could be hoping for the wrong thing.

“Their previous arguments have not been arguments about the nation. Mostly, these two big-name politicians want to score points over each other,” Nee said.

Their supporters were also fanatics, defending them no matter what, he said.

For most other people, that rivalry had simply become old, Nee said.

On the face of it, “the winner and loser are political leaders,” he said. “But we have seen that the nation always loses, and loses endlessly.”