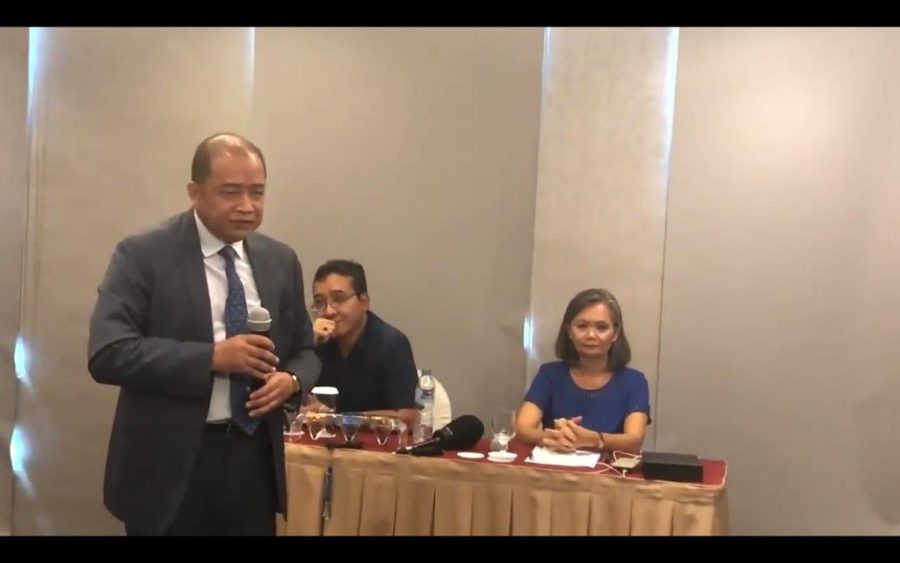 Cambodian ambassador Hor Nambora speaks at a press conference in Jakarta on November 6, 2019 as CNRP vice president Mu Sochua, right, looks on, in a video posted online by Amanda Hodge, a correspondent for The Australian.

More than 30 former CNRP leaders and activists face another trial for plotting charges related to the failed return attempt of party vice president Mu Sochua in 2020.

Sokong said the 34 former CNRP leaders and activists were due to be tried on September 15. The lawyer said already-jailed opposition members, such as Kong Mas and Khan Bunpheng, were linked to this trial, whereas other former CNRP officials like Ir Chana, Voeun Veasna and Voeung Samnang were involved but would be tried separately.

The country has seen a series of mass trials against activists from the main opposition CNRP, which was outlawed in 2017 after a strong showing at that year’s commune election.

Meanwhile, 14 CNRP prisoners were transferred on Monday from Phnom Penh to Tbong Khmum province’s Correctional Center 3, according to Ouk Chanthy, the wife of one of the prisoners Yim Sareth.

Nuth Savna, spokesperson for the Prisons Department, said on Monday that around 50 people had been transferred from Prey Sar prison to Correctional Center 3, including former CNRP members and activists. He said the transfers were routine.

The 34 activists summoned to trial are: