Anti-Corruption Unit Finds One of Its Officials Corrupt 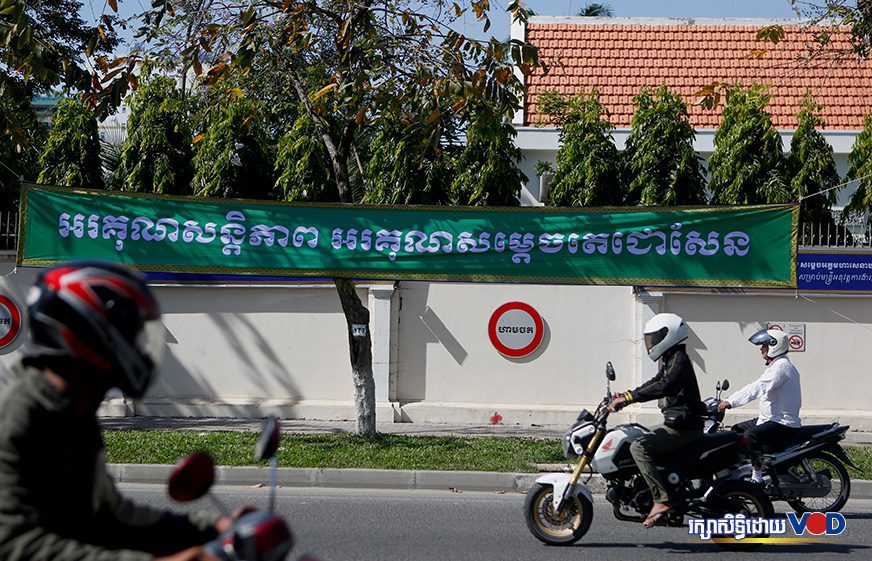 Motorbike drivers pass a sign saying “Thank you for the peace, thank you Samdech Techo Hun Sen” at the Anti-Corruption Unit in Phnom Penh on January 2, 2020. (Panha Chorpoan/VOD)

Members of the public who have experienced corruption at the hands of officials at the Anti-Corruption Unit are encouraged to provide further information to the unit after it sent one of its staff members to court.

The ACU said in a statement that its internal investigation unit found Touch Tith Vathana, 27, an officer in an international complaints and legal affairs department, had committed corruption.

“Touch Tith Vathana used various methods for illegal personal gain while he was in charge of receiving complaints,” the statement said. “When he was suspended, he did not stop his illegal actions and demanded more from the complainant.”

The internal investigation had collected evidence and questioned Tith Vathana before coming to its conclusion, it said. His case was sent to the Phnom Penh Municipal Court for misappropriation of public funds and corruption.

In a separate case, the ACU asked Chan Ponleuk, vice president of the National Defense University, to clarify irregularities related to his duties and responsibilities.

“Some students study for three years and get three degrees, both bachelor’s and master’s degrees, and do not come to school but still get a degree as long as you pay from $3,000 to $5,000,” the ACU statement said.

Ponleuk had also sold four cars belonging to the university and a sundry of other equipment for personal gain, it alleged.

“Therefore, please clarify this case and provide the above relevant documents to the ACU on time. Your excellency’s clarification is the basis for the ACU to consider whether to complete the procedure or not,” it said.

“Cambodia still has widespread corruption — the scale of the corruption is huge, in every sector, high and low, national and subnational,” he said.

“People are currently afraid and hesitate to report corruption,” Pisey said. “People who work in these sectors know that such cases often occur.”