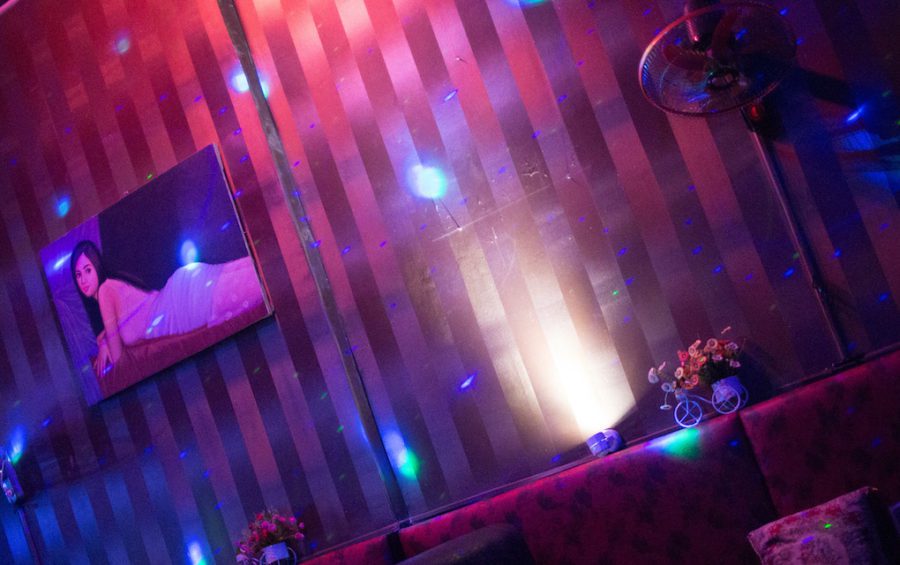 An anti-trafficking police officer is under investigation after allegedly asking a KTV worker to sleep with him, getting rebuffed, punching the KTV’s owner and guards, pulling out his gun, then suing the owner’s son for posting video of the incident.

The Phnom Penh-based officer, Hak Ly, visited the Prey Veng province KTV on Friday night before turning violent after midnight, according to police and the KTV owner.

“We have already questioned the owner of the KTV. She has a swollen neck,” Bunthoeun said. “Authorities are working on this case. There was violence.”

The owner of the KTV, Lor Sarom, 43, said military police had questioned her over the incident for about four hours on Monday.

Ly had arrived with four others to drink and sing karaoke with some of her female staff, Sarom said.

He then asked one of the women to sleep with him, saying he had spent a lot of money at the KTV for her, according to Sarom.

When she refused, saying she never goes home with anyone, “he kicked my chairs, table and refrigerator … the women were crying,” Sarom said.

“He was violent against me, punching my back and neck … he punched my security guards five times,” she said.

“When he got into the car, I thought it was finished … and asked the security guards to be quiet,” Sarom said. “But after he got in the car he pulled out his gun and opened the window and pointed it at me and said, ‘I have the right to shoot you to death and shut your restaurant … and put you in jail.’ I was shaking when I saw the gun.”

Through tears, Sarom said she was scared and angry.

In the incident’s wake, Ly filed a police complaint that was circulated online, including by the KTV owner’s son.

“I have seen that [the son] posted footage of myself that impacts my honor heavily, so I am filing a lawsuit … for defamation,” the complaint says. “Please, district police chief, take legal action.”

Later, the KTV’s son commented on Facebook, appealing to Prime Minister Hun Sen and his wife Bun Rany for help.

“He beat my mother and bragged that he was a police officer from the Interior Ministry. … He was angry because women [at the KTV] refused to sleep with him,” the son wrote. “Please … find justice for my mother.”