Any Factory Closures Will Be Due to Coronavirus, Not EBA, PM Says 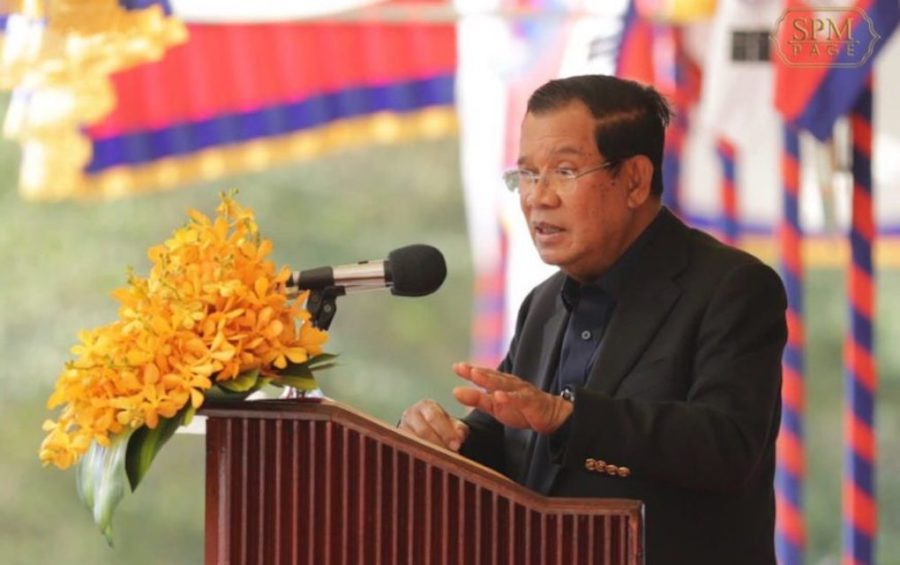 Prime Minister Hun Sen speaks on February 11, 2020, in this photograph posted to his Facebook page.

Prime Minister Hun Sen on Tuesday said potential closures of garment factories in coming months would be due to novel coronavirus quarantine measures cutting manufacturers off from Chinese materials suppliers, not the result of the E.U. suspending trade benefits.

During a groundbreaking ceremony for a highway construction project, Hun Sen warned workers not to panic if factories close in coming months.

The production of material supplies, like cloth, has been delayed as parts of China are under quarantine due to the ongoing novel coronavirus outbreak that has spread to more than 20 nations, the prime minister explained.

“For us, in the coming days, if there is any closure of factories, it is not the result of EBA,”  Hun Sen said. “Please don’t blame this on the economic sanctions from Europe and from the European Commission.”

The Commission on Wednesday is expected to announce whether it will suspend Cambodia from its Everything But Arms (EBA) duty-free trade scheme over labor and human rights concerns.

Employment in the sector could decline by about 6 percent in the long term — or about 45,000 jobs lost — if the EBA was suspended, according to estimates from the International Monetary Fund released in December.

In a statement released Tuesday, the Garment Manufacturers Association of Cambodia (GMAC) noted that about 60 percent of the raw materials used in the country’s garment and shoe factories are imported from China.

GMAC did not specify how many factories might be impacted by coronavirus-related supply shortages, but it noted that some would start depleting raw materials by the end of this month, and shortages could continue through March.

“Facing this issue, some factories have no option but to temporarily suspend production, which could take the whole month or up to two months,” according to the statement.

“The temporary suspension that we expect to happen in the coming days is not related to the European Union’s procedure to remove EBA trade preferences from Cambodia,” GMAC said.

In his speech, Hun Sen acknowledged that some workers might lose jobs due to the shortage of imported supplies. But he said that if EBA was revoked, Cambodia would still be able to ship to E.U. countries, and the industry would not be subject to tariffs in the European market until August.

“I appeal to our people not to be horrified,” he said. “We are the owners of our country.”

Labor Ministry spokesman Heng Sour told VOD on Monday that some businesses will likely close temporarily without a stable supply of materials from China.

In terms of supply, Sour said that factories could remain at 100 percent productivity till the end of this month, but productivity would decrease to 95 percent during the second week of March and then drop further to 90 percent by the end of March.

He also said that any factory closures in the next few weeks would have nothing to do with EBA.

Sour said other countries in the region, including Vietnam, South Korea and Japan, were also feeling a production strain as major Chinese cities have implemented quarantines, but he said the industry is working to find solutions.

“Some factories contacted the Ministry of Labor to inquire about how to ask for a short suspension [of production], in case they run out of raw materials in mid-March. Factories are also contacting brands to figure out if there’s another way to source raw materials from China,” he said.