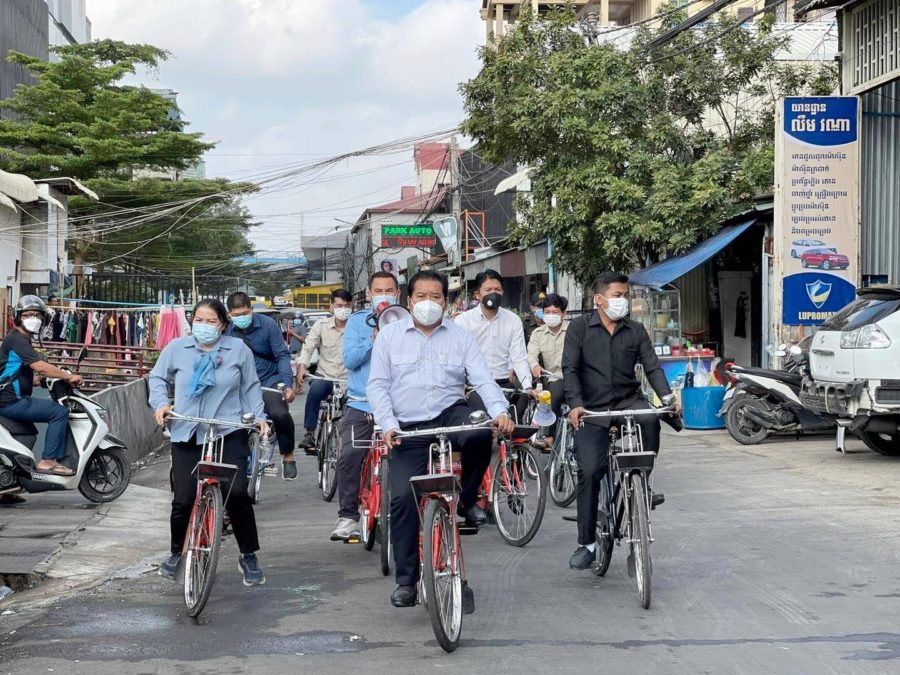 Boeng Keng Kang district officials riding bicycles while asking residents to get booster shots to curb the spread of the Omicron variant, as seen in a photo posted on the district’s Facebook page on February 21, 2022.

A senior Health Ministry official said the recent spike in daily Covid-19 cases could very quickly increase to four or five digits, while another official said it was not yet an “emergency” but admitted the virus was spreading and could affect vulnerable communities.

The Health Ministry reported 736 Covid-19 cases on Sunday and two deaths, the first deaths reported from the virus in more than two weeks. Monday’s case count had dropped to 488 infections, but deaths had increased to three, of which two people were unvaccinated.

There has been a sharp spike in cases since Feb. 5, with more than 5,400 reported Covid-19 infections. Or Vandine, speaking in a Telegram group of journalists, said the Omicron variant was now the dominant strain in Cambodia. She urged caution, saying there could otherwise be a further spike in case numbers.

“We have seen the daily [count] increase from one digit to three digits,” The Health Ministry spokeswoman said in a voice memo. “If we do not prevent this infection together, I think this number will increase quickly because Omicron has quick transmission. So it could increase from three digits to four or increase to five digits.”

Cambodia’s daily case count passed the 1,000 mark on a few occasions last year, but has never been even close to the five-digit mark.

Over the weekend, pharmacies around Olympic commune were crowded with people lining up outside the dozens of medicine shops in the area.

A pharmacy owner at Olympic said sales were brisk last week and that people were mostly buying medications recommended by the Ministry of Health, as well supplements such as Vitamin C.

“I still have been selling well till today … they said they were buying to use,” the pharmacy owner said.

Medicine sales seemed to be doing well across the city. Another pharmacy owner in Por Senchey district, who did not want to be named, said sales had increased since there was a spike in infections, with people buying Covid-19 medications and rapid tests.

“If the numbers keep increasing, they will be worried, and they will still buy and keep it ready like they did last year,” he said.

Photos on social media showed long lines with little social distancing, at the Ministry of Telecommunication, where people were buying Covid-19 medication Molnupiravir.

Health Ministry spokesperson Hok Kimcheng said the increase in pharmacy sales, including those at the Telecom Ministry, could be because either people were buying it for patients being treated at home or in anticipation of a possible infection in the household.

Despite the rising cases, he said it was not yet an emergency, but did express concern for the elderly, people with health conditions and the unvaccinated if the current trend persisted.

The government has released a slew of statements reiterating existing Covid-19 measures, such as the “3 Dos and 3 Don’ts.” It has asked organizers to restrict attendance at religious ceremonies, weddings and other celebrations, but has not provided an upper limit of attendees at these events.

Health Ministry documents released over the weekend and on Monday urged people to get their booster shots and encouraged vaccinations among young children.

Prime Minister Hun Sen has repeatedly said that Cambodia needed to learn to live with Covid-19 under a “new normal”, suggesting that any sort of lockdown or harsh measures would impact the economy and potential return of tourists.

Local officials across the city expressed concern over the increase in cases in each of their constituencies, adding they were trying to get people to follow Covid-19 measures.

Sak Sitha, Prek Pnov’s deputy district governor, said there was a drop in cases on Monday, after the district reported around 30 cases a day last week.

She said her district was reporting lower numbers because it had a smaller population compared to other districts. She did admit that there could be an undercount because “there is some loss of [case] numbers at the local level when the people did not report about their case.”

Tieb Vanroeung, the Kakab I commune chief in Por Senchey district, said an increasing number of residents were using rapid tests to check if they were infected and that local officials were working with patients to assist in their home treatment.

The commune chief said patients getting treated at home would have to be tested every three days and can be released only after successive negative test results.

Chum Saray, the Phnom Penh Thmey commune chief, said there has been an increase in cases since the Lunar New Year earlier this month, with his commune reporting around 60 cases a day.

He said local officials were worried about the steep rise, but also blamed it on people not following health guidelines.

“The local authorities feel worried and we have used loudspeakers to disseminate [measures] everyday,” he said. “We have seen [people’s] activity and they seem to be careless and do not pay attention to prevention.”