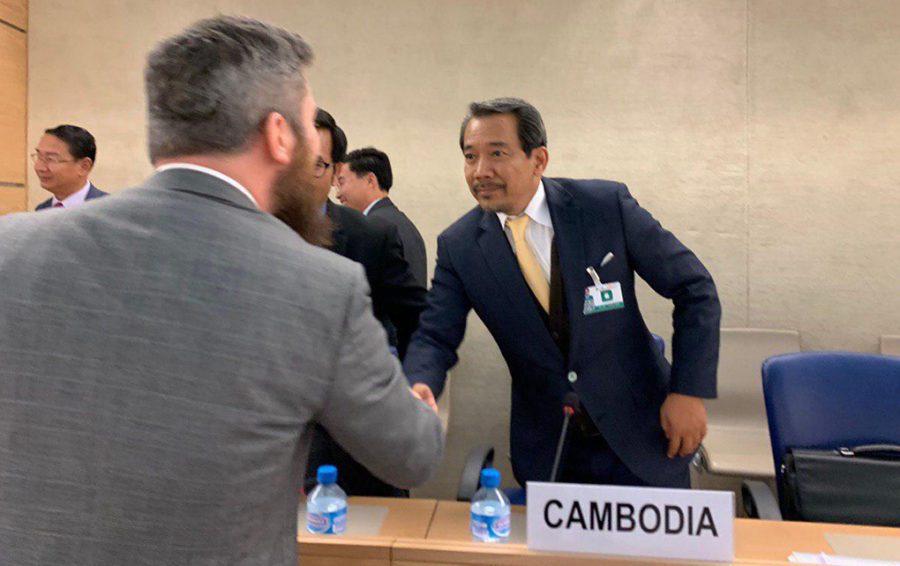 Keo Remy, the chairman of the government’s Human Rights Committee, at the U.N. in Geneva in January. (Facebook/CHRC)

Cambodia will not accept recommendations to release opposition leader Kem Sokha from house arrest when it delivers its formal reply to the U.N.’s Universal Periodic Review (UPR) of its rights record later this year, an official involved in the process said, but will take on board more “general” reform advice.

On January 30, Cambodia received its third evaluation under the U.N. Human Rights Council’s UPR system in Geneva. Under the almost 15-year-old program, each of the 197 U.N. member countries are assessed over cycles of five years for their adherence to human rights obligations, such as those covered by treaties, the U.N.’s founding charter and the International Declaration of Human Rights.

This year’s review comes amid threats from the European Union (E.U.) to rescind Cambodia’s tariff-free export access to its markets unless rights abuses, such as attacks on civil society and the repression of critics like the opposition Cambodia National Rescue Party (CNRP), are reversed by Prime Minister Hun Sen.

Chin Malin, a senior official at the Ministry of Justice and a spokesperson for the government’s Human Rights Committee, which represented Cambodia at the meeting in Geneva, said the government would accept all but 25 of the 198 recommendations for human rights improvements from 73 countries.

A U.S. call to release opposition leader Kem Sokha, who has now been detained 18 months without trial on charges of “treason” for supposedly planning an illegal government overthrow, was a specific request so would be “noted,” he said. Malin has previously said Sokha could legally be indefinitely detained without trial.

He declined to reveal which 24 other recommendations would be “noted.”

Mu Sochua, a former lawmaker for the dissolved CNRP and one of the party’s 118 officials who were banned from political activities in November 2017, said such a contemptuous reaction to the UPR recommendations could be damaging.

Sochua was one of eight CNRP officials who were recently issued arrest warrants for “plotting to commit treason” over alleged plans to assist in former opposition leader Sam Rainsy’s return to Cambodia, which has been tentatively scheduled for some time this year, to help secure the release of Sokha from house arrest.

“The detention of our leader Kem Sokha is a violation of human rights and a violation of the Constitution and the U.N.’s pronouncements. To not accept and to be dismissive of these points to respect human rights, democracy and political rights makes the situation related to the EBA even more serious,” Sochua said.

The U.N.’s review of rights in Cambodia comes in the middle of the separate review by the E.U. into Cambodia’s eligibility for access to the “Everything But Arms” (EBA) tariff-exemption scheme. The program exempts exporters from poor countries from paying tariffs on goods they send to Europe in exchange for commitments from their governments to respect human rights and democratic processes.

On February 11, the E.U. began the official process to re-evaluate Cambodia’s eligibility to be part of the scheme, which it said would take 18 months to finish.

Many of the UPR recommendations delivered January 30 were relatively mundane, with China calling on Cambodia to “continue to vigorously develop education” and Malaysia recommending the government “sustain efforts to curb tuberculosis.”

However, other recommendations included German calls for changes to the July 2015 law governing civil society groups, which gives the government broad scope to monitor and close NGOs, and the February 2017 Political Parties Law, under which the opposition CNRP was dissolved.

The Law on Non Governmental Organizations and Associations, known commonly as “LANGO,” recently led a watchdog to classify Cambodia’s civil society as “repressed” and the E.U.’s Parliament has previously called for its cancellation.

Although only the U.S. called directly for the release of Sokha, many calls from E.U. nations focused on LANGO, labor rights and the political situation.

Similar to Germany, France recommended changes to the provisions in LANGO in order to “re-establish an environment respectful of the rights of the civil society.” It also called on Hun Sen’s government “to allow members of the Opposition to participate in the Cambodian political life” and for more guarantees for “freedom of expression for all citizens [and] journalists, including on internet.”

Greece called specifically for the re-establishment of “the conditions for genuine, multi-party democracy in the country and for free and fair elections to take place.”

Ireland called on Cambodia to allow free public debate “with a view to rebuilding a democracy in which the media and civil society, including human rights defenders, can freely carry out their work without interference or hindrance.” The U.K., meanwhile, called for the government to “remove, without conditions, the ban on the 118 former opposition members from engaging in political activities.”

A statement released on April 2 by the government’s Human Rights Committee, which is chaired by former opposition lawmaker Keo Remy, did not say which of the 25 UPR recommendations would not be accepted by Cambodia. But it said the reason for the rejections was the government believed they were not offered in good faith as constructive criticism and were “political” in nature.

“The 25 recommendations are ‘noted’ because those recommendations do not respond to the real and tangible situation of the implementation of human rights in Cambodia and do not reflect the striving efforts made by the government,” it said.

“The recommendations cannot be accepted as they are against the law, including the Constitution and legal procedures in place in Cambodia, and were raised under the banner of a political agenda rather than a technical viewpoint and the principles of the implementation of rights and freedoms in a democratic society.”

“Cambodia is simply wrong when it labels as ‘political’ a number of legitimate human rights concerns like releasing political prisoner Kem Sokha, restoring the CNRP and the rights of its 118 board members, or amending rights abusing provisions of LANGO and the Political Parties Law,” Robertson said.

“The government’s recalcitrance on these core demands bodes ill for Phnom Penh being able to retain EBA benefits,” he said. “Hun Sen should change his tune on these core human rights demands so the Cambodian people won’t have to suffer again because of his arrogance and quest for total power.”

Bolstered by EBA incentives, the E.U. buys some 40 percent of Cambodia’s exports, which came in at about $11.2 billion last year. The U.S., which offers similar tariff-free access to its markets to Cambodia, buys about another 20 percent and has made similar threats to revoke the privilege unless Hun Sen changes course.

The prime minister said last month the government has little interest in responding to foreign pressure over last year’s national election, in which his ruling Cambodian People’s Party won 125 out of the 125 seats on offer in absence of the opposition.

But there have been dire warnings of economic hardship if EBA eligibility is lost. Beside the repression of political activity and civil society, the state of the garment industry itself has also come under the spotlight and noted as part of both the E.U.’s EBA review process and in the recommendations made at the U.N. in January.

On April 4, a group of industry groups representing international brands that source clothes from Cambodia also issued a letter urging the government to “address the concerns” raised about the human rights situation in Cambodia to convince the E.U. and U.S. to maintain tariff-free access to their markets.

The brands and the government had a “shared interest” in a stable, safe and predictable garment sector, noted the letter, which was signed by groups including the American Apparel and Footwear Association, the European Branded Clothing Alliance, and World Federation of the Sporting Goods Industry.

“Because of this shared interest, we remain deeply concerned with the lack of progress that has been made in addressing these important issues,” it said, noting charges against labor leaders, the “reduced independence” of dispute mechanisms and 2016 Law on Trade Unions’ limits on union creation as its biggest concerns.

“These issues are emblematic of some of the larger human rights issues in Cambodia,” the industry groups noted. “The very real threat of withdrawal from EU EBA benefits and U.S. GSP benefits will severely damage the Cambodian industry, and the millions of Cambodian who work in the industry.”

E.U. ambassador George Edgar said the government’s decisions on whether to accept the UPR recommendations made by European countries would be watched closely even if they do not directly impact the review into whether to rescind the EBA.

“Not surprisingly, there is a significant amount of overlap between the concerns raised by the EU in the context of the EBA withdrawal procedure, and those raised by EU Member States in the UPR,” Edgar said in an email. “We will study with interest Cambodia’s response to the recommendations made at the UPR.”

“However I do not expect any direct read-across from the Cambodian government’s acceptance or rejection of specific recommendations into the EU’s decision making process on EBA,” he added.

Malin said he could not confirm if the E.U. countries’ comments would be accepted come the June reply. He reiterated only that the government may accept “general comment on amendment of legislation” but not any specific demands made.