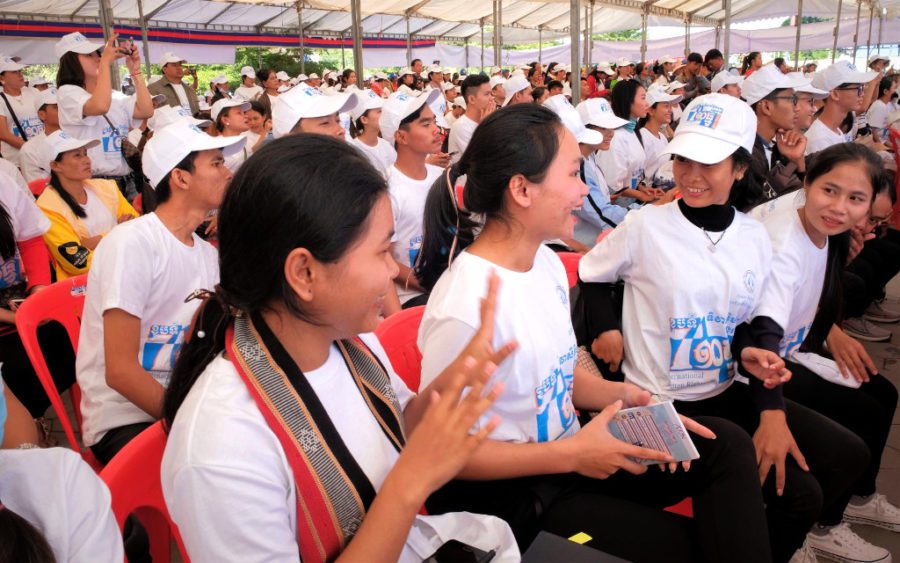 Unionists predicted muted International Human Rights Day celebrations in the years ahead, as the final time it was to be marked as a national holiday reignited debate over whether foreign pressure was justified to protect universal human rights.

Among the gathering were monks, unionists, youth activists, representatives of indigenous communities and civil society members, assembled on a public holiday that — starting next year — will be canceled to lower business costs.

“I’m afraid there will be no participants to commemorate International Human Rights Day once December 10 is no longer a national holiday,” said Ath Thorn, president of the Coalition of Cambodian Apparel Workers Democratic Union.

Workers in the country still faced a bevy of challenges — low incomes, long overtimes, unsafe workplaces, short contracts and judicial pressure — and the removal of the holiday meant both a reduction in benefits and the loss of a forum to voice their demands, Thorn said.

International Human Rights Day was one of six public holidays given the ax in August, bringing the total down from 28 to 22 days in order to appease investors complaining of their cost.

Ou Tep Phallin, president of the Cambodian Food Service Workers’ Federation, said she wasn’t sure if or how her union would mark Human Rights Day next year.

But she knew that workers would receive neither a paid day off nor holiday pay on December 10. “This is the last memory for the workers,” Phallin told VOD.

Amendments to the Trade Union Law that were approved by the Senate this week were concerning, especially because the revision process was “not really transparent” despite some consultation with unions, Phallin said.

Remaining obstacles for workers included articles of the law that hampered rights to organize, strike and represent employees in labor negotiations, she said.

“We cannot find the amendments,” Phallin added. “After the king’s signature, I think then they will release” the updated law publicly.

A Senate statement on Monday said the amendments were intended to revise provisions of the law to ensure the protection of workers’ rights, the Phnom Penh Post reported.

Meanwhile, on Facebook, opposition leader Kem Sokha used the occasion to question how the government has resisted calls to uphold human rights. Government spokespeople have labeled the demands as foreign meddling in internal affairs.

“Human rights are a legacy for all of humanity, not exclusive to any nation,” Sokha wrote. “Participating in promoting and protecting human rights isn’t an act of interfering with internal affairs. We don’t need to insult the humanity of Khmer people by claiming that human rights are the ideas of foreigners.”

Thun Saray, president of local human rights group Adhoc, who fled to Canada amid pressure on his organization in 2016, posted a video on Facebook voicing similar sentiments.

Human rights were enshrined in Cambodia’s Constitution, and respecting them wasn’t about following orders but enforcing the laws of Cambodia, Saray said. It was about “what is written in the supreme law of our country,” he said.

The pressure on Adhoc — which saw four senior officers and a fifth former officer jailed amid an anti-corruption case against Sokha related to an alleged mistress — was a harbinger of a series of legal actions taken by the government over the next two years.

Court cases against civil society groups, unionists and the political opposition culminated in a national election last year that the U.S. and E.U. have criticized as neither free nor fair. The ruling CPP’s main rival, Sokha’s CNRP, was disbanded eight months before the vote, which resulted in the incumbent sweeping all 125 seats in the National Assembly.

The E.U. has since begun a process to rescind duty-free access to its markets unless Cambodia shows improvements in upholding political and human rights, and the U.S. has sanctioned a trio of tycoons and military officials.

However, Katta Orn, spokesman for the governmental Human Rights Committee, said it was not human rights — the cause espoused by the foreign states — that were the problem, but the way the countries put pressure on the government to change.

“It’s good for foreign countries to participate in promoting and protecting human rights in a manner of friendship and cooperation,” Orn said. “But imposing pressure and restrictions by using human rights issues in a political way violates the national sovereignty in a way that Cambodia can’t accept.”