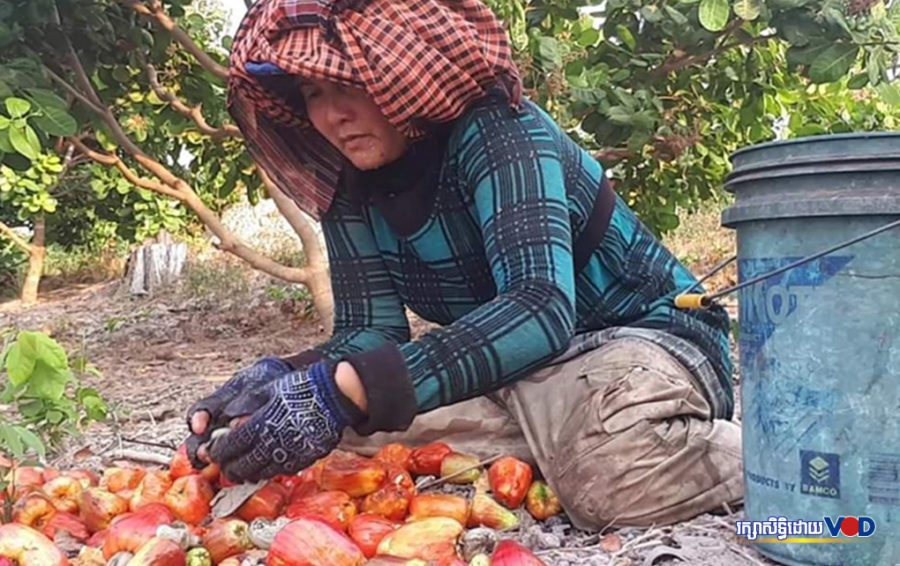 “We have been trying very hard … [but] the prices cannot cover the expenses,” said local farmer Yann Vet. “Last year, the price was high, but my cashew nuts were damaged. This year, my cashew nuts are good enough, but the price is low.”

“I have spent a lot on chemicals and workers,” he said.

To make matters worse, the money that Vet invested into his cashews — at about 600,000 riel ($150) per hectare — was borrowed from microfinance firms, and he said he now would not have enough money to repay the interest or principal.

He said his only hope now was that the government might step in to help.

Khut Mout, who owns 5 hectares of cashew farms in the district, said he had put much of his money this year into fertilizer, at about 120,000 riel ($30) a bag. Now he, too, was facing the prospect of large losses, he said. Mout called for more training sessions to be provided to farmers to avoid the recurring problem.

“I want the market and [officials] to train farmers on how to properly grow this kind of crop, in order to avoid losing money on chemicals and fertilizers and avoid technical mistakes, and so on,” Mout said.

Heng Sroy, a local cashew-nut middleman, said the price of the nut depended almost entirely on Vietnam’s market, to where most of the crop was exported.

“The reason that the Vietnamese businessmen lowered the price is the rain and the [resulting low] quality of the cashew nuts,” Sroy said of the local crop.

“One cannot achieve it alone. The important thing is the commercial side,” Ra said. “The private sector has big capital to invest.”

As for the requests for technical guidance from the farmers, officials with expertise visited farmers to give advice, he said, but the farmers did not seem interested and were drawn instead to firms peddling chemicals and fertilizer.

“We went almost everywhere but most of them did not pay much attention to agricultural methods. Then we called them to come and learn but most of them were not interested,” Ra said. “I do not know what can be done, and it’s hard.”

Cambodia currently exports about 100,000 tons a year to Vietnam.

The Agriculture Ministry in March created a special taskforce of 23 members from its various departments to study and develop the country’s cashew market and attempt increase the yield to 1 million tons within the next 10 years.