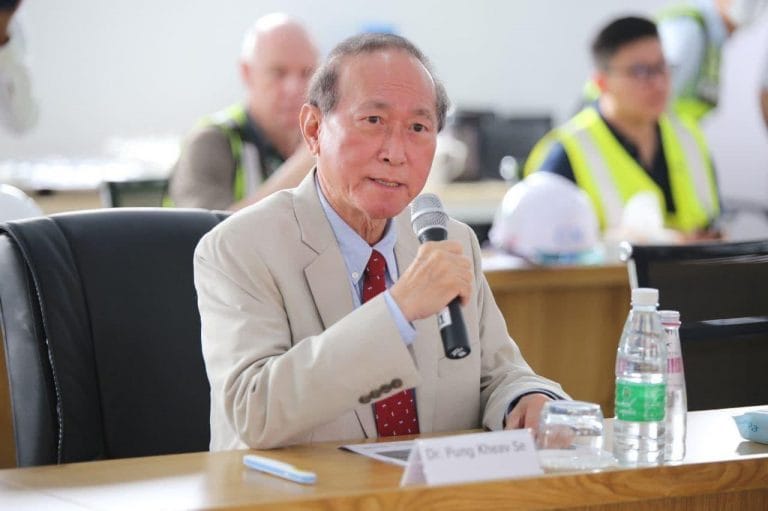 Pung Kheav Se, head of the Federation of Khmer Chinese in Cambodia, speaking at an event. Photo from the federation Facebook page.

The Federation of Khmer Chinese in Cambodia on Wednesday disputed international media characterizations of the country as a haven for criminal syndicates as attention grows on human trafficking at scam compounds.

The group, headed by Canadia Bank tycoon Pung Kheav Se, posted online that overseas outlets were “creating alarmist portrayals of Cambodia as a ‘crime haven’ for criminal syndicates” in their “exaggerated” reports of online fraud operations.

Cambodia has been wracked by accounts of human trafficking and forced labor as foreign nationals have told of being lured to work in the country only to be trapped in scam compounds.

However, the Khmer Chinese federation emphasized that such criminal activities “by no means represents Cambodia’s economy as a whole.”

The group advised caution around job recruitments to Cambodia, called on the media to be objective and correct, and rejected “baseless” interpretations of fraud crimes’ significance to the country’s economy.

The group’s members also include tycoon Kok An — linked to a Sihanoukville scam compound — and Land Minister Chea Sophara. [Full statement below.]

Meanwhile, international reports on human trafficking have mounted over the past week.

Indonesia’s The Star reported last week that North Sumatra Police were tracking down a recruitment company involved in the alleged trafficking of 212 Indonesian workers to Cambodia. Police suspected that the workers, including 20 women, would be employed by an “illegal online gambling ring” in Cambodia.

On Monday, Taiwan News said 72 Taiwanese human-trafficking victims had been rescued from Cambodia and 75 suspects arrested. The report came as Taiwanese lawmakers visited Cambodia and its police force suggested thousands of Taiwanese could be trapped in the country.

Also on Monday, AFP reported that five people were arrested in Hong Kong job scams luring victims to Cambodia and other Southeast Asian countries. Hong Kong police had received 36 requests for help related to job scams, and 22 victims were still believed to be ensnared in Cambodia and Myanmar, AFP said.

The Yunnan Jingcheng Group also issued a statement this week that it had sold its interests in the Jinshui compounds in Sihanoukville’s notorious “Chinatown” precinct in 2018, and that any alleged criminal activities there since was unrelated to the company. The group is chaired by Ruili Airlines’ Dong Lecheng.

Though Cambodian authorities earlier largely denied or deflected the allegations of forced labor at scam compounds, Interior Minister Sar Kheng on Tuesday spoke at a police training in Stung Treng province that human trafficking was “heating up” and “seriously violates human rights.”

He pointed to labor scams against foreigners based on false promises of high-paying work and a “modern” form of trafficking. “They get a salary and sometimes a bonus, but are not allowed to go anywhere and they confine them.”

“This is a problem so we will work on this with responsibility and thoroughness in order to promote Cambodia’s prestige,” Kheng said. “If not, they will accuse our Cambodia of not respecting human rights and allowing bad brokers to pursue fake investments that suppress other foreign laborers.”

Recently, overseas news media have continuously exaggerated and reported on online fraud in Southeast Asia, especially conducting baseless analyses and interpretations of fraud crimes in Cambodia and creating alarmist portrayals of Cambodia as a “crime haven” for criminal syndicates, which has garnered increased attention from around the world.

Is this really the case? Over the past 20 years of peace and stability in Cambodia, social order has been good, people have lived and worked in peace and contentment, various industries have flourished, and the country has become a hotspot for foreign investment. Before the outbreak of the pandemic, the national economy maintained an average annual growth rate of around 7%, which was one of the fastest growing economies in the region. After the outbreak of the pandemic, the Royal Government, led by Prime Minister Hun Sen, took rapid and effective prevention and control measures, allowing Cambodia to quickly win the battle against the pandemic and become one of the early countries to resume economic and social activities.

Of course, it is undeniable that as the most economically open and free country in Southeast Asia, while Cambodia attracts large amounts of foreign investment, it is inevitable in some instances that fish eyes may pass off as pearls. For example, She Zhijiang, the leader of a fraud criminal syndicate who was recently arrested in Thailand, was involved in online fraud and criminal activities in Cambodia, but this by no means represents Cambodia’s economy as a whole, nor does the economic activity of Cambodian nationals or foreigners in Cambodia rely on these activities. The Royal Government of Cambodia is strengthening cooperation with law enforcement agencies in relevant countries and regions to crack down on all forms of cross-border criminal activities and is striving to eliminate “cancers” that seriously damage the image of the country.

The Federation of Khmer Chinese in Cambodia actively cooperates with the law enforcement actions of the Royal Government and makes its own efforts to maintain Cambodia’s good international image and improve the general business environment. Here, we would like to make the following appeal to friends at home and abroad:

The Federation of Khmer Chinese in Cambodia is willing to share the reality of Cambodia’s business environment with friends at home and abroad, so as to provide necessary assistance for everyone to work, live, and invest in Cambodia!

A reporter who translated the federation’s statement from Chinese is not named due to ongoing safety concerns about reporting on the human trafficking at scam compounds.