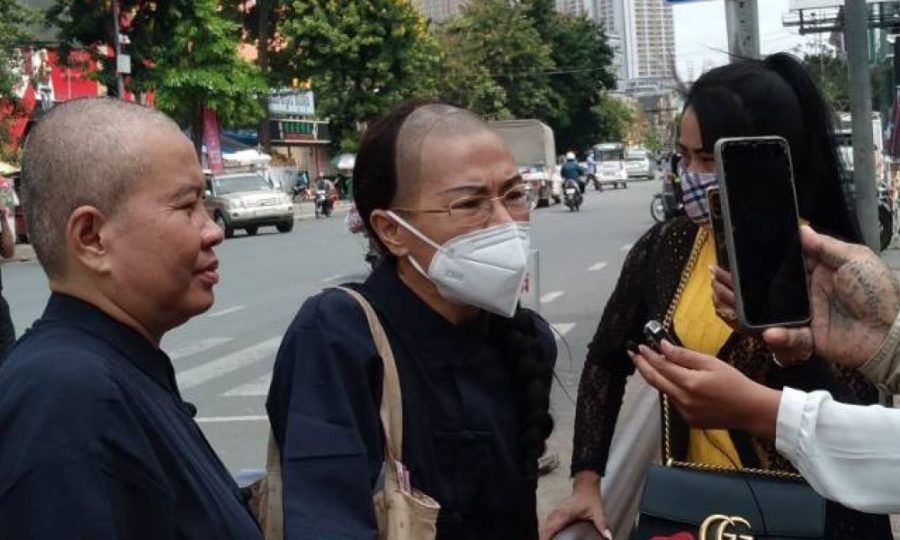 Opposition activist Seng Chan Theary, in mask, arrives at court Tuesday for her hearing as part of an ongoing mass trial of opposition members and supporters, February 22, 2022. (Ouch Sony/VOD)

Opposition activist Seng Chan Theary did not budge from her support of CNRP leader Sam Rainsy or her critiques of the Hun Sen government, as a mass trial of opposition members and supporters resumed after six weeks.

The trial, where more than 40 defendants are charged with incitement and plotting, was suspended on January 4 to give Chan Theary time to mount a defense. The trial was expected to resume last week but was delayed because of a defense lawyer’s potential Covid-19 exposure.

The hearing kicked off to an heated argument between the judges, prosecution and defense, when Chan Theary said the charges against her should be nullified because she had not been questioned or summoned during the investigation period of the case.

She pointed to Article 252 of the Criminal Procedures Code, which has five conditions under which charges can be voided, including “if any substantial rule or procedure stated in this Code or any provisions concerning criminal procedure affects the interests of the concerned party.”

Her lawyer, Choung Chou Ngy, then said she had only been summoned for the trial and this was the fault of the prosecution and investigating judge in the case.

“The [court] did not question my client but turned to send her for trial. It is a serious violation of her rights.”

The accusations sent both the judges and prosecutions into a flurry of counter accusations and verbal volleys.

Judge Ros Piseth said the trial had already commenced and these issues should have been raised during the investigating phase. Prosecutor Seng Heang claimed that summons had been sent to Chan Theary and that she had posted on Facebook about it.

As the judges, defense and prosecution argued these points, Chan Theary sat down and raised a three-finger salute. The salute, feature in the Hunger Games movie as an anti-authoritarian gesture, has become popular in Thailand and Myanmar during popular protests in those countries.

Piseth asked Chan Theary to stop making the gesture, adding that it was confusing him if she had a question to ask. He called for a recess and asked that the trial proceed to evidence against Chan Theary, ending the discussion over Article 252.

Chan Theary has dismissed the charges against her as baseless and politically motivated. She has protested the legal proceedings by appearing to court wearing different costumes, which she told reporters was fitting for what she likened to political theater.

On Tuesday, she posted on Facebook that she walked to court barefoot from the nearby NagaWorld casino complex, a move she said was in solidarity with the casino’s striking unionists and their imprisoned leaders. Chan Theary wrote that she came that day “dressed as a Chinese peasant with a Manchu queue hairstyle to symbolize oppression and the destructive colonialism of Cambodia by China.”

She added that she’d also worn “Khmer Rouge-era ankle shackles as a reminder of China’s patronage of and this regime’s ties to the Khmer Rouge.”

After the recess, Chan Theary was asked how many Facebook accounts she had and what her online activities were on the social media platform. She was asked specifically about a post from October 2019, where she wrote about “fake elections,” “fake democracy” and how Hun Sen’s family “bought fake certificates” from “fake universities.”

Chan Theary claimed that the message was written by Sam Rainsy, but after the judge reiterated whether she had drafted the post, she changed track to say that she wasn’t sure if she wrote it but still supported the sentiment of the text.

Heang, the prosecutor in the case, then took umbrage with posts where she criticized Hun Sen, if she agreed with the CNRP senior leadership’s position to remove the prime minister and why she supported international pressure on Cambodia.

He then claimed that Chan Theary had a “9” tattoo on her right arm, which he said was a symbol of “color revolution.”

The foundation of the case is linked to Sam Rainsy’s attempted and failed return to Cambodia on November 9, 2019, and the government often uses the narrative of a so-called color revolution to target the opposition. The political line was advanced by the state to get the CNRP dissolved in 2017, and this same narrative features heavily in Kem Sokha’s treason trial, which resumes on Wednesday.

Theary said the number 9 on her arm was a reference to Cambodia’s independence day on November 9, the fall of the Berlin Wall on the same date and for the fall of a dictatorial regime, but did not clarify which regime she was talking about.

The trial will resume on March 1. Another mass trial of around 70 defendants is being conducted simultaneously and is looking into the formation of the Cambodia National Rescue Movement (CNRM) overseas, as well as other events including Covid-19 comments from CNRP supporters and members.