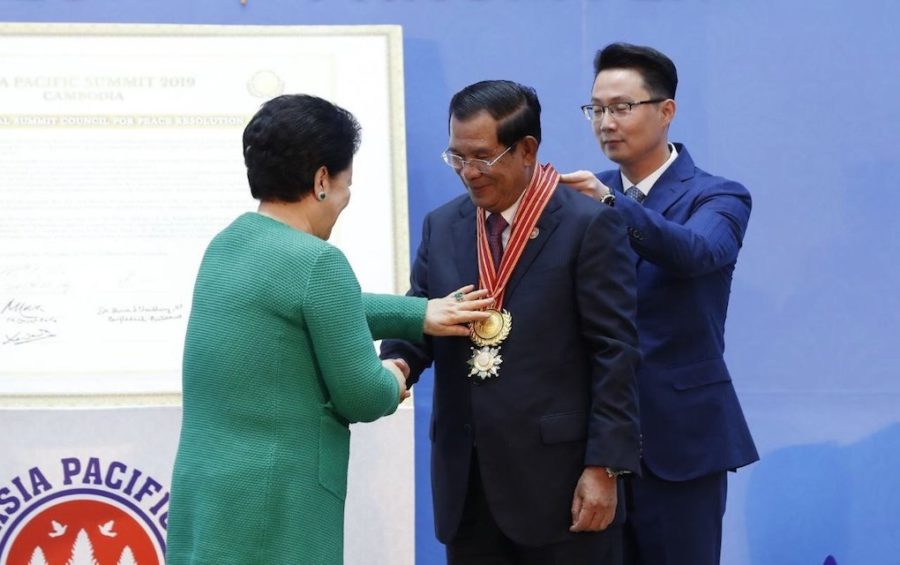 The Asia Pacific Summit, convened at Hun Sen’s Phnom Penh Peace Palace on Tuesday, saw the prime minister boast of the country’s rule of law and pluralistic democracy, and receive a good governance and leadership award.

The second annual summit was co-hosted by the government and the Universal Peace Federation, an NGO founded by the controversial Korean preacher Sun Myung Moon, and in coordination with organizations such as the International Conference of Asian Political Parties (ICAPP), which observed Cambodia’s widely criticized 2018 national election and hailed it as a success.

“The success of the 2018 election is yet another significant step in promoting the Kingdom’s ongoing reforms to realise the people’s aspirations for peace, democracy and development,” ICAPP said in a statement in July last year.

ICAPP represents political parties from across Asia, and claims to bring together governing, opposition and independent factions. National Assembly second vice-president Khuon Sudary is a member of its standing committee.

Moon, a self-proclaimed messiah, founded the Unification Church in 1954 — which was known for holding mass weddings of thousands of followers. Moon promoted international and intercultural marriages as a means to attain world peace.

He died in 2012, leaving a diverse business empire that included a conservative Washington newspaper, hotel in New York, university in Connecticut, and a hotel and car manufacturer in North Korea, the Associated Press reported at the time of his death.

At the conference on Tuesday, Hun Sen said Cambodia had attained peace thanks to his win-win policy to end the country’s strife of the 1970s and 80s.

“Currently, Cambodia is a country governed by the rule of law, firmly adhering to the principles of pluralistic democracy with regular free and fair elections that enable citizens to elect leaders who respect the principles of law — a sovereign state that has full territorial integrity,” Hun Sen said.

As he accepted the Universal Peace Federation’s good governance and leadership award, Hun Sen said the medal was recognition of the challenging circumstances under which he had stewarded the country’s development, particularly in the 1980s, when the ousted Khmer Rouge was backed by the U.S. and China and held Cambodia’s seat at the U.N.

“At that time, Cambodia used one hand to protect the country against the return of genocide and another hand developed the country from zero while being unfairly put under external economic siege,” he said.

Licadho monitoring manager Am Sam Ath said Hun Sen was partly right. He was a key figure in bringing about the 1991 Paris Peace Agreements that established democratic principles in the country.

But in recent years Hun Sen had been criticized for taking the country backward, Sam Ath said.

“We do not deny the civil war,” he said. “But in relation to the issue of democracy and respect of human rights, we still face restrictions.”

“We have not seen Cambodia become a country that fully respects the rule of law,” Sam Ath said.

The main opposition CNRP was dissolved by the Supreme Court in November 2017, eight months ahead of the 2018 election.

Rights groups and some foreign governments, such as the U.S. and E.U., called the dissolution political and said it showed the courts’ lack of independence. They criticized the poll, in which Hun Sen’s CPP won all 125 National Assembly seats, as neither free nor fair.