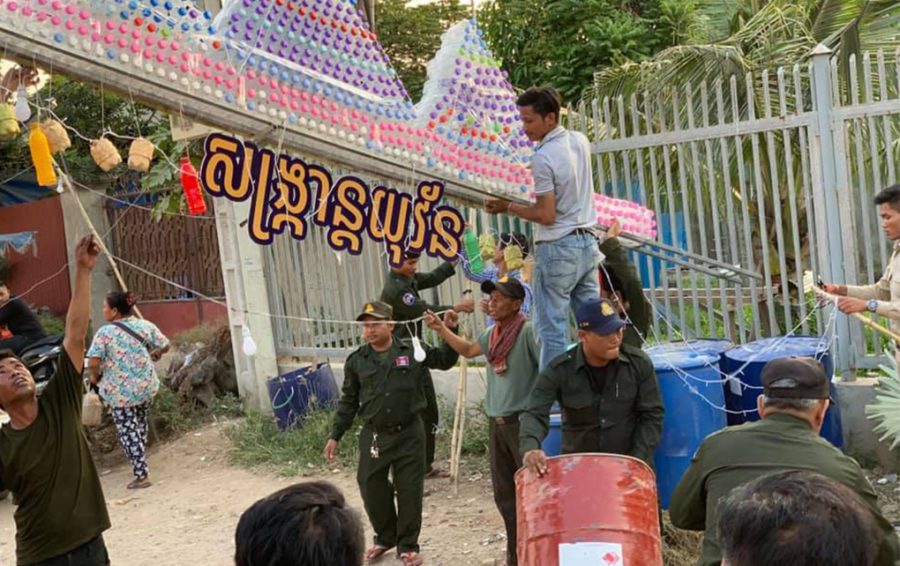 A group of young people hoping to celebrate the Khmer New Year were stopped by local authorities last week. (Photo/Facebook)

A group of young people hoping to celebrate the Khmer New Year by cleaning up Phnom Penh’s heavily polluted Beoung Trabek canal and raise awareness for the environment were stopped by local authorities who said the area was too dirty.

The group have spent recent weeks cleaning the waterway and gathered again at the pungent open waterway for about an hour on Saturday for the party before Chamkar Mon district officials arrived and asked them to leave. The canal runs through a residential area and is almost entirely filled with trash along stretches.

Phnom Penh City Hall spokesman Met Measpeakdey said that the area was too unsanitary for such a gathering and could affect the health of participants. He added the group was using an abandoned wooden raft without permission.

“Our country has laws. It was a public event and our brothers used the homemade raft that was built and left there without making a request,” Measpeakdey said.

“How does this reflect on us? This is the lesson we want to impart, we cannot just do anything — [like] use a raft belonging to others to hold a ceremony without asking without informing and seeking permission from others,” he said.

Sen Daravid, one of the organizers of the event, said he had in fact informed the district authorities ahead of time and was confused by their response. The group sought donations for the Khmer New Year celebration and raised about $2,000 to set up a stage to help raise awareness about cleaning up the city, he said.

“I do not understand about this action from the authorities because we told them two days before the ceremony but on the day of the ceremony they came to stop us,” Daravid said, adding that the wooden raft had appeared abandoned.

Am Sam Ath, technical supervisor for local rights group Licadho, said authorities should not have stopped the event and pointed out Interior Minister Sar Kheng recently told authorities to increase their cooperation with civil society groups.

“It is a violation of the right of the young people to participate in social work — in particular related to environmental work,” Sam Ath said, urging the local authorities to instead encourage community groups trying to do good deeds.

(Translated and edited from the original article on VOD Khmer.)