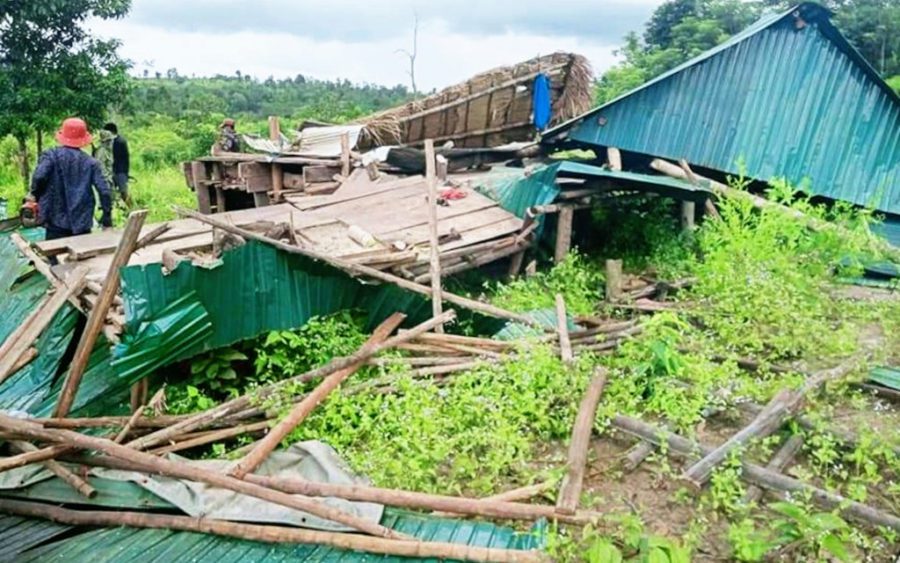 A house in Koh Kong province’s Botum Sakor district that villagers say was dismantled by authorities on the week of August 29 to September 4, in a photo supplied by local residents.

Koh Kong villagers said that authorities have been clearing their crops since last week in the province’s Botum Sakor district, with authorities saying the people were encroaching on the Botum Sakor National Park.

Residents of Chamlang Kou village in Thma Sar commune said authorities have been clearing their crops and had damaged some of the homes in the area as well. The villagers said around 100 families were affected by the clearings.

Try Touch, a resident of Chamlang Kou, said authorities last week cleared 12 hectares of cashew trees belonging to his family. Officials told him the family were occupying land in the national park, he said. But he has been using the farmland since 2006 without any objection from local officials, he said.

“Samdech [Hun Sen] used to say that if people live to actually rely on land for five to 10 years, the authorities have to cut that land for the people … but instead they cut down people’s crops.”

Lam Chhen, another resident of Thma Sar, said that he had planted 7 hectares of fruits, of which authorities had cleared 4 hectares, costing his family thousands of dollars.

Vit Chreang, meanwhile, said she planted jackfruit, mangoes, potatoes and cashew trees on 5 hectares of land. She said her farmland has not been cleared but she is worried that if authorities continue the clearings she will lose her crop.

“I am very scared because I have many children and no other land. And on the other hand, our land is in the middle of others, and those crops around us were cut down,” she said.

Hun Marady, the director of the Koh Kong environment department, said briefly that villagers had encroached on land that was in the Botum Sakor National Park.

“Because they came to rely on the national park. Now I am meeting with the provincial [officials] about this. The decision is up to the government. I have no right,” Marady said.

Hour In, a provincial coordinator with rights group Licadho, said officials had double standards when it came to clearing alleged encroachments, often focusing these efforts on villagers and not the rich or well-connected.

“In this case, their crops were already big trees and [they] go and cut them down, while on the other side, [people] who have money and power, [their land] is not destroyed. So, the implementation of the law is unequal,” In said.