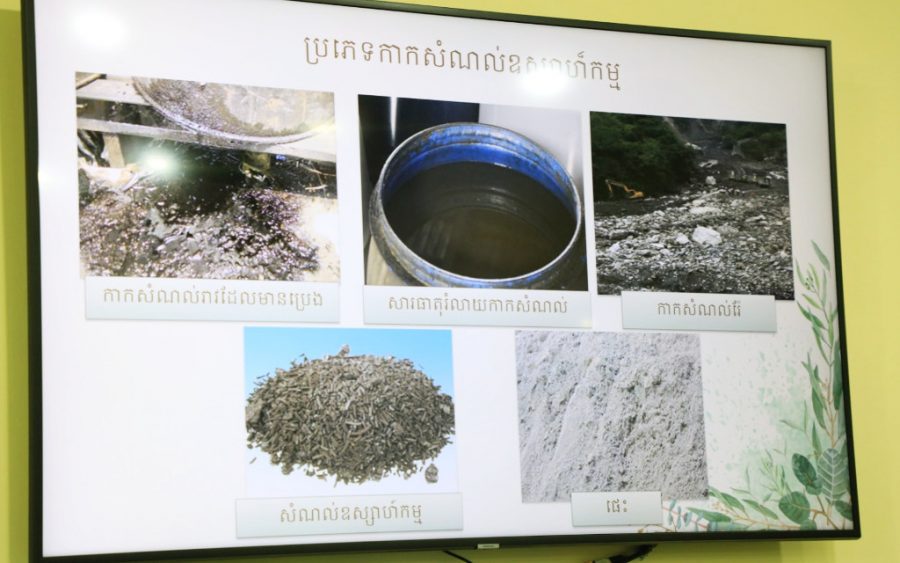 An illustration of industrial waste, posted to the Facebook page of the Preah Sihanouk provincial administration.

Preah Sihanouk provincial authorities ordered a coal ash plant in Stung Hav district to close in two weeks after nearby residents frequently complained of struggling to breathe amid the potentially poisonous dust, officials said.

Shi Mao Trading, a plant in the district’s Otres commune, processes the residual ash and burnt coal from coal-fired power plants for construction material, but residents near the plant have complained for years that dust from the company contaminated the air and water.

Stung Hav district governor Chhay Sokunda said on Monday that provincial authorities decided to close down Shi Mao Trading’s coal ash plant after the company failed to follow multiple orders to reduce its environmental impact on people in the nearby villages over almost two years.

“So the ministry and provincial authorities made the final decision, and this is the last time because it has been five or six times [we’ve warned them] already,” Sokunda said.

Otres commune residents complained often about the plant and asked for its removal, he said. The dust flies out when the company packs the processed ash for distribution in the dry season, and it leaks into the canal during the rainy season, Sokunda said.

Sokunda said about 20 to 30 families lived in the immediate vicinity of the plant, while Otres commune chief Hak Meng said between 300 and 400 families from two villages were impacted.

Meng confirmed the decision to shut down the coal ash plant on February 15 following a meeting with the provincial governor, adding that he welcomes the decision.

“The company did not listen to us when we asked them to find a new location,” he said.

He had raised the issue to provincial and national officials multiple times in the last two or three years, he said. None of his commune’s residents work there, so it does not bring any economic benefit to the community, he added.

Rather, he is grateful that the plant will be moved, as he was concerned about the long-term impacts of the coal ash debris on his community.

Coal ash contains poisonous substances including mercury, cadmium and arsenic, and it can contaminate waterways, drinking water and the air, according to the U.S. Environmental Protection Agency.

Sokunda, the district governor, said the dust worsened in the past year, as the company had to store more because it could not quickly manufacture and distribute its final products. He said the company had been operating for seven years of the 15-year lease it received.

“This is the final time, and they did not improve as they had promised,” he said.

Environment Ministry spokesperson Neth Pheaktra said he did not have information about the plant or its closure.

Shi Mao Trading’s two listed directors in the Commerce Ministry business registry, Wang Fangping and Chen Zheng, are from China’s Hunan province. A woman who answered the phone number listed for Shi Mao said she was not familiar with the company.

Sajith Edirisuriya, general manager of Chip Mong Insee Cement’s industrial waste management program Ecocycle, explained that coal ash is used to make products such as concrete, and some countries also make bricks or other products from the ash. However, demand for coal ash products likely slowed in the last year as the construction industry faltered during the pandemic.

Much of Cambodia’s “ready-mix” concrete, or concrete that is manufactured in large batches for bigger projects, likely used products processed by Shi Mao, he said, including Chip Mong Trading’s ready-mix concrete among the 15 or 20 players who manufacture the lower-cost construction product.

But it is not a part of the Ecocycle process that he manages, which processes a variety of industrial and biomass waste for use in Chip Mong Insee’s specialized cement products, and which claims to have zero net waste.

To include coal ash in the program, coal power plants would be subject to higher fees than the ash plant charged to remove the waste, he said.

“Most are not willing to make the extra cost for the environment, but if they want to, we can [recycle coal ash],” he said.