Authorities Investigate Land Clearings in Two Provinces, but No Arrests 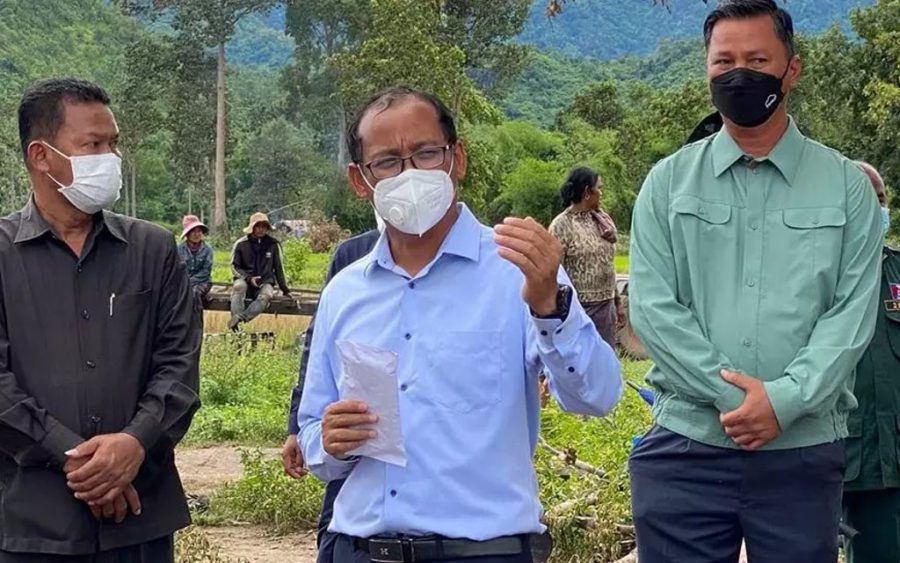 Kampong Chhnang provincial governor Sun Sovannarith on July 8, 2021, in a photo posted to the Facebook page of the Interior Ministry.

A communal lake was in the process of being filled in Kandal’s Kien Svay district, while 30 hectares of flooded forest was cleared in Kampong Chhnang over the past week, authorities said, but no perpetrators have been arrested for the violations.

Kien Svay district governor Ou Chheang said authorities had stopped a group of people who were filling in an 800-hectare lake that is used as a reservoir for fishing and irrigation by local villagers.

“People have encroached on the land by creating boundaries everywhere and we have also taken action to seize their machinery and educate them and let them make a contract to stop working or processing on the land,” he said.

Local authorities acted after social media posts from July 20 showed the 800-hectare lake being filled in the district’s Chhoeuteal commune. Another social media post from Tuesday had an unidentified woman claiming that her sister, Hun Nary, was the owner of the land and had bought it from villagers but was yet to get a land title.

Chheang, the district governor, warned that strict action would be taken against anyone who encroached on state land, but it was unclear why this group of people were let go and only made to sign an agreement.

Kampong Chhnang governor Sun Sovannarith said his officials informed him on Tuesday of the clearing and that 10 hectares of forest had already been cleared during the nighttime.

He tasked his officials to investigate and arrest the offenders, the governor said, adding that their identities were unknown.

“We are looking for who is involved and the tractor drivers who were clearing [the lake],” he said.

Vann Sophat, a project coordinator for business and human rights at the Cambodian Center for Human Rights, said making offenders sign a contract and releasing them would not prevent land grabs.

He said authorities have displayed a double-standard in taking strict action against ordinary residents but that the rich and connected were mostly let off.

“Failure to strictly and properly implement the law will lead to impunity and the companies will not learn the lesson. The next day, they will do more than this. So that is the problem,” Sophat said.

Am Sam Ath, deputy director at rights group Licadho, said the authorities’ reluctance to prosecute all offenders equally was causing a loss of confidence among citizens, who already have little trust in the judicial system.

In May 2020, the Ministry of Water Resources and Meteorology instructed Phnom Penh and provincial governors to prevent the filling in of river banks, streams, canals, reservoirs and lakes. The directive comes after the ministry witnessed encroachment along waterways and water bodies around the country.