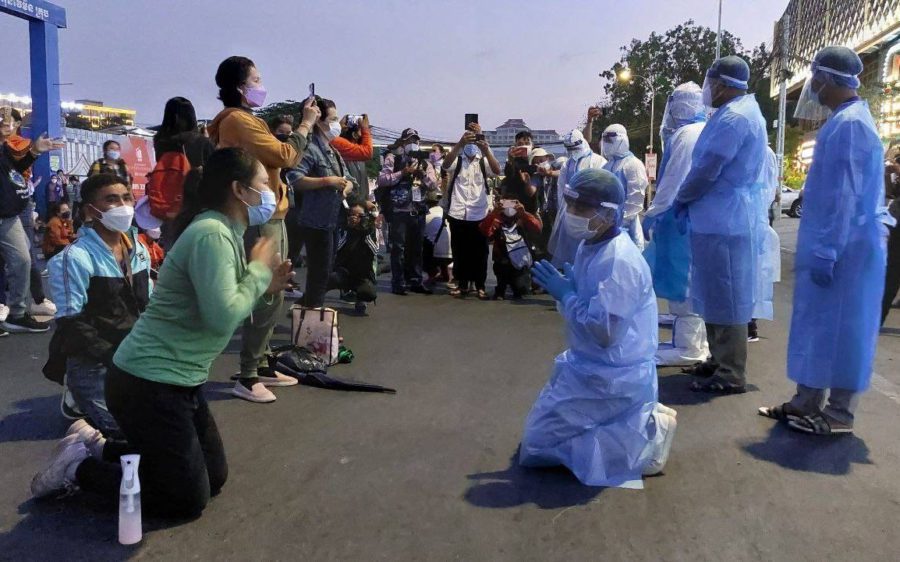 NagaWorld protesters ask to be allowed to go home on February 4, 2022. (Keat Soriththeavy/VOD)

Police blocked NagaWorld strikers from leaving their daily rally late Friday afternoon, saying they needed to be tested for Covid-19.

They were eventually allowed to leave the scene around 6:45 p.m.

An earlier positive test for a woman — who said she has not attended the protests since January 15 after finding out she was pregnant — led to a strong health response on Friday.

The protesters were also blocked from leaving to go to the bathroom, while mall staff blocked them from using toilets when they came escorted by U.N. monitors.

The workers have been protesting since December 18 over mass layoffs in 2021 that they say targeted union leaders and members. Eight top unionists at the Phnom Penh casino have been jailed amid the protests.

The Health Ministry issued a rare statement early Friday saying all NagaWorld protesters must be tested within three days after one woman tested positive for Omicron.

The woman, Sam Arn Chhuon, then posted a video saying she had been unable to join the protest for weeks after becoming pregnant and suffering morning sickness.

In the afternoon, around 350 protesters turned up to National Assembly Blvd., continuing their near-daily rallies. There have been only two days when the workers did not rally following several arrests on New Year’s Eve.

Protester Jhoun John said Arn Chhuon had not attended since January 15. The workers were strong and healthy, she added. “We’ve stood under rain and sunlight.”

Health authorities arrived at the protest on Friday with loudspeakers, as an official read out a statement that if the protesters did not comply, authorities could use the Covid-19 Law.

Workers responded by playing Prime Minister Hun Sen’s speeches saying people should only get tests if they had symptoms.